Cadillac is on the cusp of debuting the most potent track ready models it has ever offered the 2022 Cadillac CT4-V and CT5-V Blackwings. While the duo represent just how far the brand has come in the world of luxury performance sedans, it also makes one look back at the V-Series range and in particular some of the early ancestors that helped play a role in the creation of this special performance focused sub-brand and what they brought to the table. One of these concepts was the Steinmetz Catera concept which previewed what would happen if a healthy dose of performance was injected into the brand’s entry model sedan.

A Glimmer In An Era Of Stagnation

Before we get into what made the Steinmetz such a unique car, one has to understand the state of GM during the mid 1990s. Back in those days profits took precedent over quality and that helped play a role in GM being behind the curve in some areas. In the case of Cadillac that meant not having a entry to do battle with the BMW 3-Series, Audi A4, and the Mercedes C-Class. The last attempt in this arena was the Cadillac Cimmaron which was nothing more than a Chevrolet Cavalier with chrome and tacked on Cadillac badges.

GM execs at the time looked globally for their next attempt and thought they struck gold with the Opel Omega. Renaming it the Catera, Cadillac began selling the model in the U.S. in 1996 with the brand hoping that it would revive the brand’s languishing image and bring in customers that were not making their weekend shopping run from the local nursing home Off the bat, the Catera had a very lousy start with the company choosing to dedicate the bulk of its marketing to creating an animated duck named Ziggy (based off of one of the six merlettes that were in the Cadillac crest at the time.) The merlettes themselves were actually based on swallows and symbols of heraldry but that didn’t stop Cadillac from moving forward with its web footed mascot.

Ziggy tried his best to zig younger buyers into showrooms, but the bulk of them instead zagged their way to the German big three, with Cadillac’s old clientele swooping in to pick up the scraps instead. It didn’t help either that the Catera was about as sporty as your father’s favorite pair of loafers with heavy curb weight conspiring with an underpowered engine to create a truly boring car. The Catera it seemed was doomed to failure right out the gate.

With the stock Catera being based on an Opel product, GM decided to recruit German tuner Steinmetz who specialized in adding some vigor to various Opel models. The company was looking to kill two birds at once when the concept was formally completed. It wanted to gauge what customers thought of a souped up Catera while also previewing an upcoming sport package for the Catera at the same time. The sport package would make its production debut in 2000, and the hope was that it would help create a true pecking order in the Catera lineup with the sport and the potential range topping Catera creating two extra rungs of performance.

In the case of the Steinmetz Concept it certainly had alot going for it when it made its rounds in the auto show circuit. The exterior styling was freshened up, with the front fascia featuring a blackened front grille, a revised front bumper, and a set of vents on the hood. The side profile benefited from bigger alloy wheels and bigger skirts, whiule the rear featured a prominent rear spoiler and two chrome dipped exhaust tips rounded out the orange hued package.

The interior was also heavily updated with leather sport seats replacing the stock seats and drilled aluminum pedals adding some spice to the cabin. Steinmetz also added a sport steering wheel and splashed higher quality leather accents throughout the cabin. All of these treatments helped give the interior a very distinctive flair and a personality that was practically unheard of with Cadillac models of the period.

Steinmetz Concept Had The Firepower To Back Up Its Claims 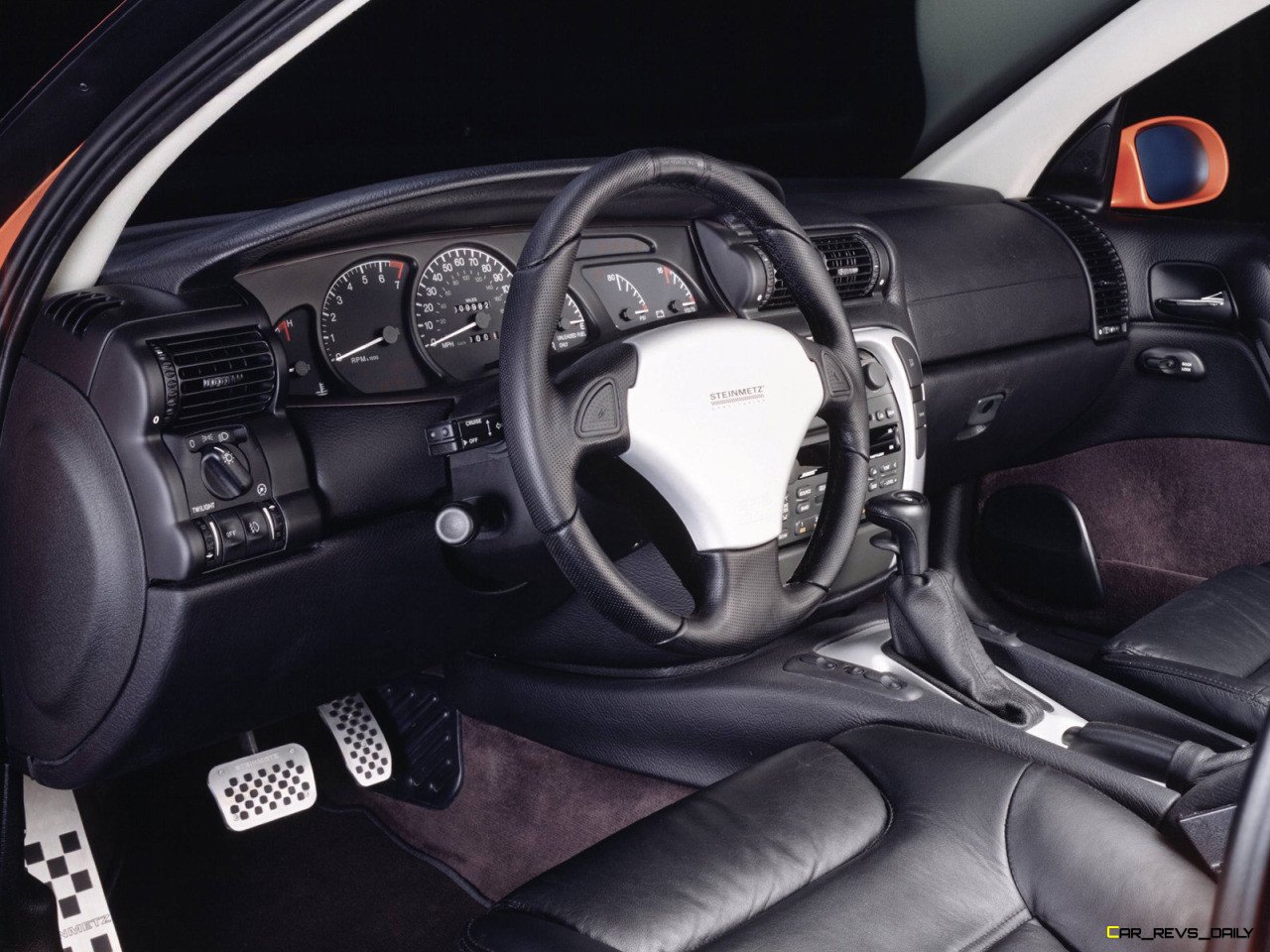 While looking far better than the production Catera sedan is an already impressive feat, it wouldn’t mean much if the concept didn’t have the chops to back up its sporty credentials. Steinmetz engineers gifted it with a lower sport suspension and added bigger front rotors as well as double piston front calipers. The real star of the show though was the tweaked 3.0 liter V6. Making a rather meek 200 horsepower in its stock form Steinmetz added an belt driven intercooled supercharger which helped raise power to a much more potent 284. That number is impressive considering that it managed to outclass the bigger 3800 Series II supercharged V6 in a slightly lighter package.

The lone caveat though was that Steinmetz was forced to use the Catera’s stock 4-speed automatic transmission which gave it less gears to work with when it was pushed hard. While the Steinmetz might seem to be woefully underpowered when viewed alongside modern Cadillacs, having 284 horsepower was a big deal in the mid 1990s and made the Catera pretty quick by period standards.

What Happened To It?

The Steinmetz Concept certainly had potential, but while it was a sportier version of the Catera it did very little to improve the Catera’s moribund sales figures with the lukewarm reaction also forcing Cadillac to cancel stillborn plans for a Blackfin sub-brand. The Catera itself would be axed in 2001 with its departure giving Cadillac room to introduce the much more successful CTS sedan in 2003. But while the Steinmetz failed to save the Catera, it did play an indirect role in inspiring Cadillac to create the CTS-V in 2004. Like the Steinmetz Concept, the first generation CTS-V was designed to give more performance to the CTS, but it did so with more power thanks to its 400 horsepower V8 and two more gears with a six speed manual being the sole transmission available.

Thus the Steinmetz became a unique footnote in Cadillac’s history that ultimately helped create the pathway towards modern performance Cadillacs including the Blackwing models.