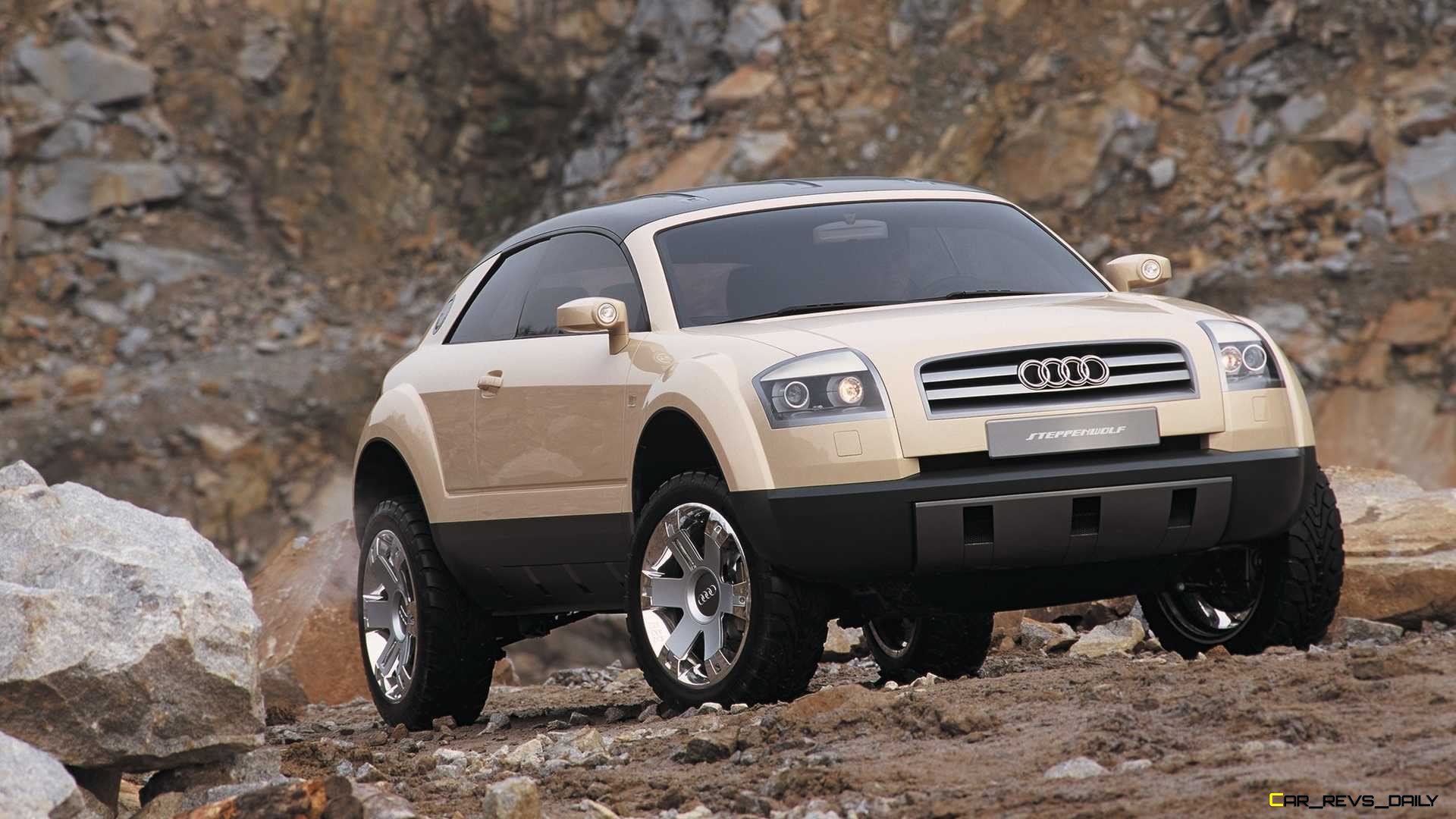 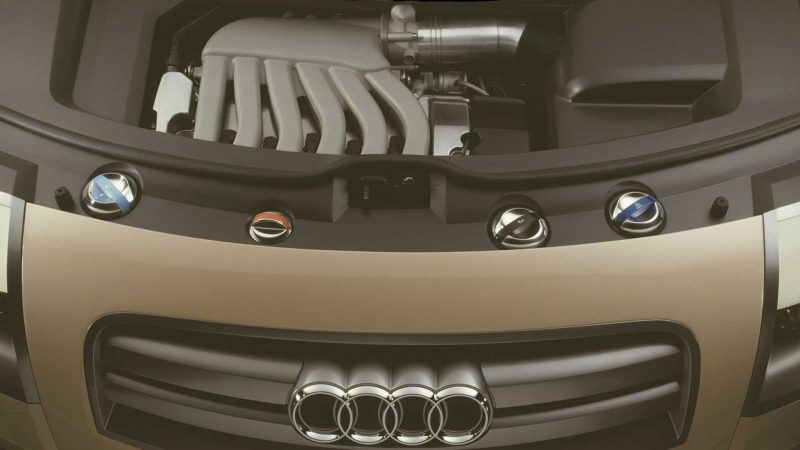 It’s not too often that automaker manages to find its figurative step when it comes to designing a concept car for the masses. But Audi managed to take things in an interesting direction when the new millennium arrived on the scene. The company that was typically known for making well buttoned luxury cars was keenly aware that not only were SUVs important, but that the very definition of what an SUV should be was also rapidly changing. Perhaps sensing that the wheels of change were grinding into motion, Audi commissioned the Steppenwolf concept car which aimed to answer what would happen if Audi made a utility offering.

Steppenwolf’s styling a change of tune for Audi 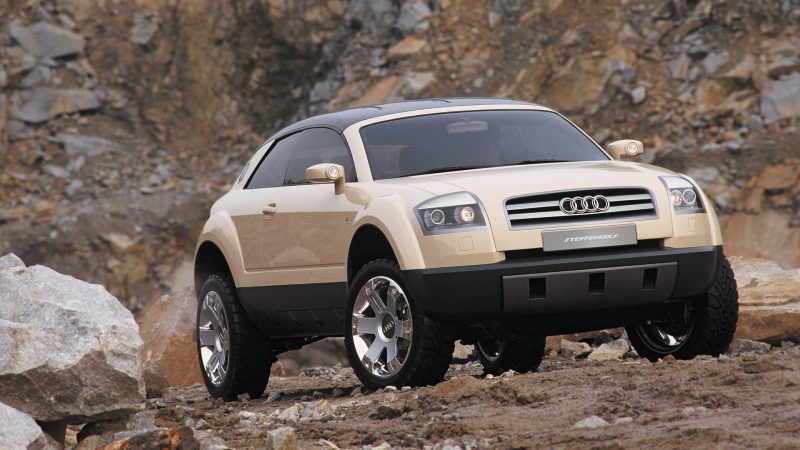 The exterior styling of the Steppenwolf (not to be confused with the iconic rock band of the same name) was derived from the first generation Audi TT and was supposed to answer the question of what would happen if the TT was morphed into a high riding off-roader. The front fascia of the Steppenwolf was a very interesting exercise with the lower front bumper actually being integrated into the contrasting cladding that adorned the lower half of the concept. The upper half featured a small front grille and TT inspired headlights and a sporty side profile that further served to highlight the large alloy wheels. The rear featured sporty looking taillights and the rear bumper housed a set of shiny dual exhaust tips.

The three door concept also housed some very clever engineering with the high rider being designed as a convertible. This was achieved by not only incorporating a carbon fiber hardtop but a separate manually removable soft-top as well. The rear fascia also hides some tricks of its own with a swing style tailgate being joined by a two tier rear shelf system that incorporated the spare tire in one shelf, and a toolkit in the other. 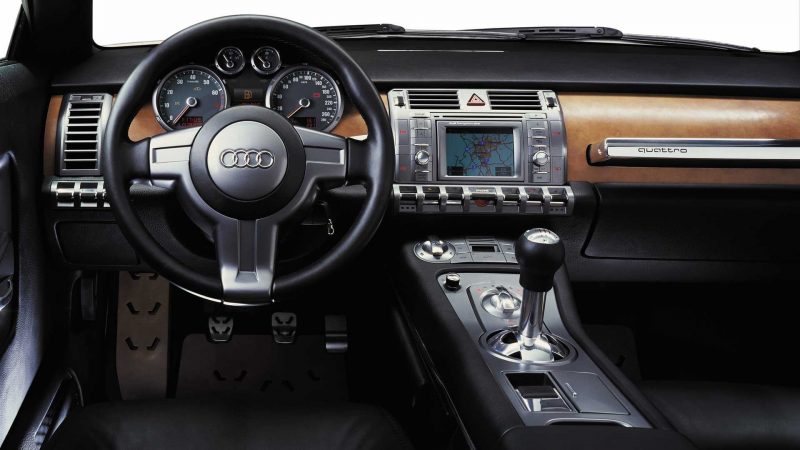 A key calling card of the Steppenwolf though was the interior. While it shared much of its core elements with the TT (especially the dashboard) the Steppenwolf embarks in its own direction in a number of ways. Lush wood trim is nicely accented by metal accents, and the center stack features a satellite navigation system. While navigation has filtered its way into mainstream car offerings, the system was a very novel concept back in 2000, and its inclusion on the Steppenwolf helped it stand out from the rest of the show car pack.

The instrument cluster is refreshingly analog, and leather sport seats help provide balanced amounts of support and comfort. The transmission tunnel effectively splits the cabin in half, with the end result being a true four seat environment for occupants. While this does result in losing the extra passenger a rear bench seat provides, the sporty look and feel it projects is a nice tradeoff. 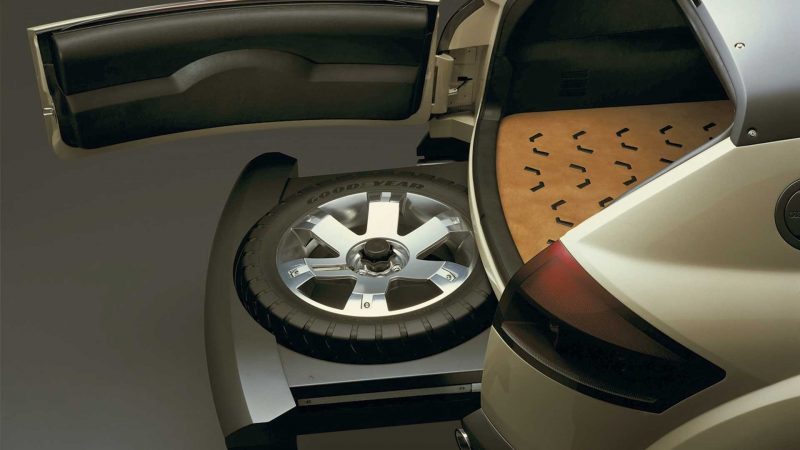 Performance for the Steppenwolf concept came from the “Born to be Wild” section of the firm’s parts bin with Audi’s familiar 3.2 liter V6 headlining the show produced 225 horsepower and 236 lb-ft of torque. All of this power was fed to all four wheels through a six speed manual transmission and the Quattro all-wheel drive system. This setup alone already allowed the Steppenwolf to be a potent off-roader but its proverbial trump card could be found under the show car inspired sheet metal where an advanced air suspension was located.

The trick suspension allowed the Steppenwolf to have a maximum ground clearance of 60 millimeters when fully raised and it also allowed three other levels of adjustment (an unheard of thing in an age where air suspension technology was still in its early teething stages.) The air suspension also helped the Steppenwolf to have a smooth ride and also enhanced aerodynamics when the Steppenwolf was lowered all the way down. That latter bit was often overlooked in an era where fuel prices were still cheap, and the notion of fuel saving technologies were not seriously pursued.

Did the Steppenwolf Concept spawn a production model?

Not on its own, but the Steppenwolf did serve as a proverbial seed for Audi’s broader idea of making a car based soft roader. After the concept completed its time on the show circuit, Audi would revive the core premise in 2014 when it unveiled the TT OffRoad concept. Like before this newest concept toyed with the idea of making an off-road focused TT crossover albeit with updated styling inside and out to reflect Audi’s current design language. This concept did not get approved for production either and it appears that the idea has gone dormant again.

As for the production portion of this question, the Steppenwolf does have a faint link to the Audi Q3. While that model was previewed by a separate concept that appeared in 2006, it used a few ideas from the Steppenwolf. That included the sporty side profile as well as a new generation version of the fabric folding convertible roof.