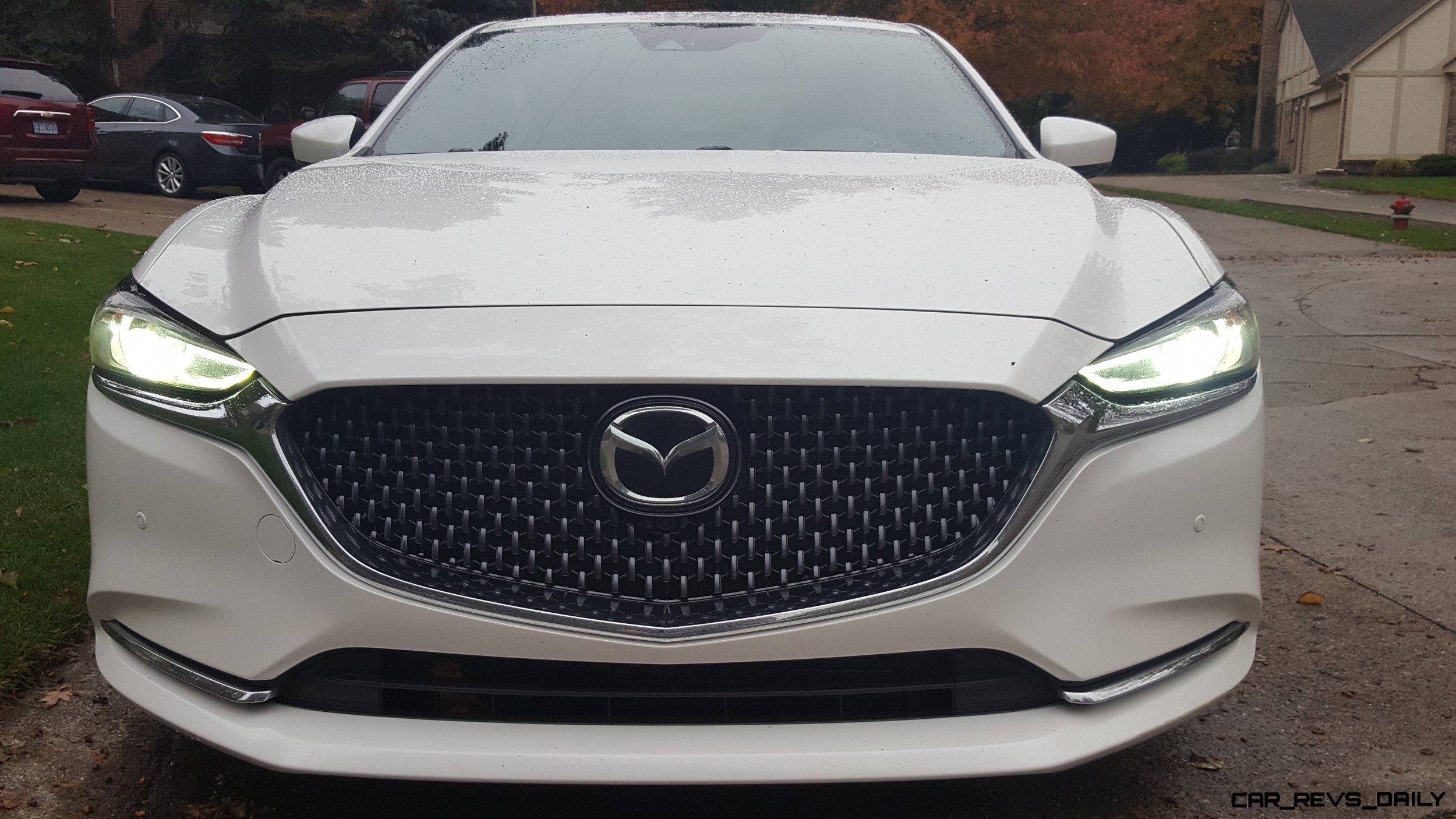 When an automotive enthusiast looks at the 2018 Mazda 6 Signature, quiet and refined may not be the first characteristics that come to mind. This is partially due to prior generation Mazda 6 models, which boasted commendable levels of performance, but with much more noise than many of its rivals.

The 2018 Mazda 6 aims to exorcise this image, but without ruining the basic delectable bits that lurked beyond the high decibel levels. But can the 2018 Mazda 6 pull off this trick? Or does it still fall short of being a true disrupter to mid-size sedan icons like the Honda Accord and the Toyota Camry?

More Polish and Subtlety Makes The World Go Round:

The first thing that potential Mazda 6 buyers will notice is just how much polish and form has been added to the styling.

Unlike other iterations of the 6 which looked decidedly cruder, and had no reservations about flaunting their design challenged exteriors. This version of the Mazda 6 finally hits the nail square in the head when it comes to exterior styling. The look is more reserved, but it also has a higher degree of elegance thanks to the car’s redesigned front end which features slick headlights, a decidedly wider stance, and an all new mesh style front grille that replaces the older iteration’s vertical slats. The sculpted lines and the bulging elements of this machine are still present and accounted for, and they really allow the Mazda 6 to retain some of its athletic undertones.

The rear end is arguably the blandest aspect of the car, but we do like the taillights back there, and the tidy chrome bar that links the two together. Arguably the lone blemish with our tester was its washing machine inspired Snowflake White Pearl paint which made it blend into the background more than it should of. If we were ordering a Mazda 6 for ourselves, we would actually opt for one of the darker hues on the color palate, which sync better with the exterior styling, and allow the Mazda 6 to have a much stronger presence when out on the open road.

Luxury and Serenity, Is This Really a Mazda?

That was the initial thought running through our heads when we first got acquainted with the interior of our Signature grade tester. When this generation of Mazda 6 was first unveiled several years ago, the Japanese firm was quick to point out all the time and effort that went into designing the interior, and this dedicated effort to detail truly makes itself known in a number of ways. Material quality in our tester was very impressive with soft plastics, supple leather accents, faux suede accents and real rosewood accents adding splashes of elegance to the interior.

These touches help push the cabin into BMW 3-Series and Audi A4 territory, but at a significant discount which is an impressive feat. A strong centerline divides the dashboard horizontally and even extends into the doors while slimmer HVAC controls clean up some of the button clutter. Lastly, the Mazda 6 retains the four knob layout that controls temperature, volume, and secondary infotainment controls which is a huge plus considering that some of its rivals are ditching this keep it simple philosophy for pure touch based operation.

Front passenger room in the 6 is pretty good with commendable amounts of front head and leg room. Rear passengers do suffer from tight head room due to the way the roof slopes, but it is still a relatively comfortable place to spend time in though we highly recommend leaving this particular space for children and cargo when the 6 is tasked with long road trips. Visibility is good for the most part, but the rear pillars do occasionally create blind spots during freeway driving. Serenity also defines the driving experience, and the cabin does a much better job hushing wind and tire noise.

Our one interior complaint centers around the I-Drive-esque control wheel that helps drivers navigate their way through the infotainment system. While the control wheel does fit easily into the hand, and is within relatively easy reach of the vehicle, the finer elements are still a bit too balky which include adding directions in the navigation system, as well as some of the radio controls, which require way too many inputs and steps for distraction free driving. The fore-mentioned navigation system is a very prominent offender in particular, and this resulted with us inputting directions while we had our tester parked versus on the move.

Hopefully, Mazda will eventually released an updated version of this setup that eliminates some of the extra steps, and adds more input speed to the overall tech package.

A key change for 2018 is the addition of the all new turbocharged 2.5 liter four cylinder to the 6’s engine lineup.

Borrowed from the CX-9, this engine shares the two power ratings that also define its service in the CX-9, with the turbocharged four pot producing either 227 horsepower on regular 87-octane fuel, or the full 250 horsepower when given a steady diet of 93-octane premium fuel. The lone caveat is that this engine is only available in the 6’s two highest trim levels with buyers having to opt for either the Grand Touring model (and its “Reserve” badged cousin,) or the range topping Signature trim like our test car.

The rest of the Mazda 6 range makes do with the 187 horsepower version of the 2.5 liter four cylinder, with Sport models being your only ticket into a manual transmission. All other Mazda 6’s (Signature included) get the excellent company built six-speed automatic transmission. Unlike the CX-9, all-wheel drive is not an option on the front-wheel drive 6, but that could change in the future, especially with the recent launch of the all-wheel drive equipped Mazda 3 model.

While the turbocharger does add a bit more zing to the Mazda 6’s muscle, the engine also does not have the noticeable low end torque delivery that other turbocharged engines employ (including the 2.0 liter in my 2013 Buick Verano Turbo.) Instead, the engine takes a more subdued approach, and the 310 lb-ft of torque on hand arrives in a refined but underwhelming manner with fewer upshifts being the most noticeable effect (we get more bang out of a half eaten bag of pop rocks than this engine.) Buyers looking for more urgency will have to either engage Sport mode, or shift the gears themselves with the shifter or the steering wheel mounted paddles. The lack of immediate punch is most noticeable in the 0 to 60 sprint, with our tester completing the task in 6.4 seconds.

This is slower than the 5.5 seconds posted by the Honda Accord 2.0t, and the 5.8 seconds that the V6 equipped Toyota Camry can do.

Handling in our tester was composed and secure in daily commuting, but the 200 lbs of extra flab that the 6 now carries does make itself noticeable in spirited driving, with our tester lacking some of the sharpness that we liked in the 2016 version. This was especially evident in a separate encounter in Wisconsin where we had the opportunity to take a second Mazda 6 for a lap around Road America raceway in Wisconsin. The extra weight did produce more understeer on sharp corners, and there were instances where we had to adjust our braking points to help the otherwise confident 6 weave its way through the track. Back in Metro Detroit, the 6 rose to the occasion as a good backroad carver, and its revamped suspension hardware allows it to occasionally show a freeway on ramp who is boss when pushed hard.

Braking in our tester was secure, though there is a bit more nose dive than what we were expecting in a Mazda product, which is again partially due to the extra weight that it is lugging around. That said, it is a bit more confident in this arena than both the Honda Accord and the Toyota Camry which should please buyers that want a balanced family hauler that can still moonlight as a weekend guilty pleasure. These buyers will also love the ride which is more comfortable than the firmer CX-5, and works hand in hand with its laser accurate steering rack to produce a communicative driving experience.

As mentioned earlier in this piece, value is a very strong trait of the 2018 Mazda 6, with the base Sport model starting at $22,840. Our range topping Signature tester had a base price of $34,750, with a sprinkling of options and fees helping to push the final price to $36,040. While it is hard to ignore the fact that this is a $4,000 bump over last year’s flagship Grand Touring model, it is important to note that this is a $36,000 car with real Sen wood trim, Nappa Leather seats, and other luxury goodies.

Replicate this in a base BMW 3-Series for example, and be prepared to pay over $40,000, with the base trim only being $2,000 less than the range topping Mazda. Meanwhile, Mercedes-Benz will ask for just over $41,000 outright for a base 2.0 liter C-Class, with options making the already lofty price balloon even higher. Both have rear-wheel drive, but that isn’t enough to hide the fact that the Mazda has them beat in providing a strong suite of content for the money.

When placed back in its home segment, the Mazda 6 takes swipes at the Accord and Camry, as well as the Chevrolet Malibu. While the 6 lacks some of the polish, tech savviness, and fuel economy that defines its rivals. It makes up for it by exuding a unique character that in a way reminds us of the artist formerly known as Saab.

Whereas the defunct Swedish brand had an affinity for listening to the beat of its own drum, turbocharged engines, and an obsession with center mounted ignition switches. Mazda focuses on delivering a fun driving experience that adds spice to the daily commute, which is sadly missing from many family focused mid-size sedans.

There is a lot to love with the 2018 Mazda 6 Signature, and we are big fans of its impressive list of standard equipment, sleek styling, and its high quality cabin. We wish Mazda will cram more Red Bull into the turbocharged engine eventually to help truly make this car a disrupter in the mid-size sedan segment and a guaranteed entry into our dream garage.