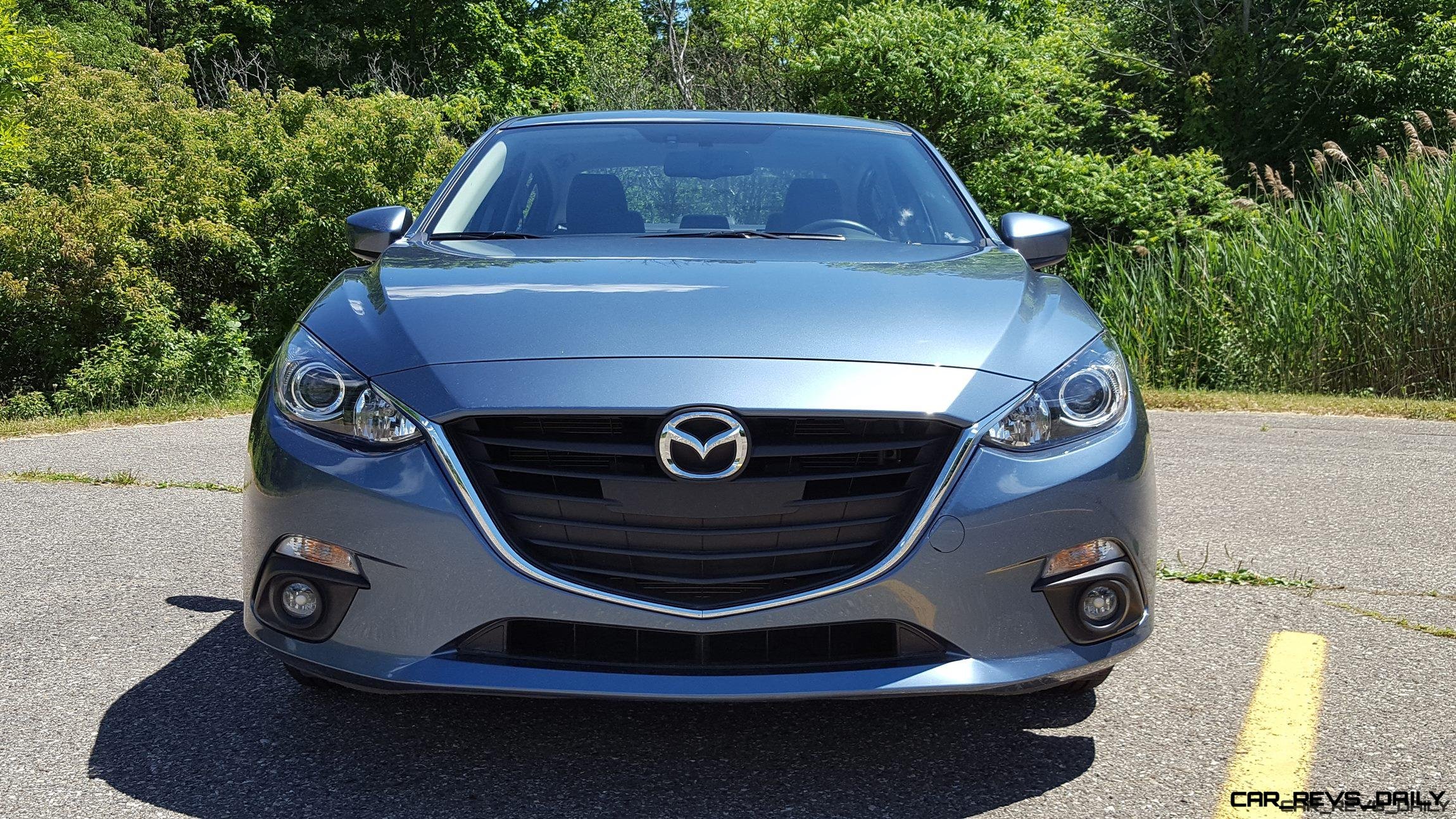 With the recent surge in CUV sales, it is easy to forget that the compact car segment is still one of the hottest segments in the automotive market. From the Ford Focus to the venerable Toyota Corolla and Nissan Sentra, the segment has a wide range of talent to choose from. Bucking the trend is the 2016 Mazda3 which has always offered buyers a spirited driving experience in a sensibly priced package. But has its stellar road manners blunted the 3’s ability to rise above established compact car benchmarks?

Looking at its exterior styling, it appears that the 3 is off to a good start. The front fascia is a bold and aggressive exercise in flair and is much improved over the smiley face look that once defined the 3. The headlights in particular embody the performance infused spirit that was first showcased in several of their recent concept cars including 2010’s Shinari concept. The rear fascia features updated taillights and does a nice job balancing out the 3’s stylish suit of clothes. This should please younger buyers that want good looks at a value oriented price, while also allowing it to stand out against blander rivals including the Corolla and Sentra.

The interior of our tester (like other recent Mazdas) also embodies the company’s recent commitment to improving interior quality. My Grand Touring spec tester featured high quality materials, and comfortable leather seats. As is the case with its brand mate the CX-3, the faux carbon fiber trim doesn’t quite cut it as a substitute to the real thing, and feels cheap to the touch. The prominent tachometer however is a welcome feature in this car, and brings a welcome dash of performance to the cabin. Mazda’s 7-inch touchscreen infotainment system was also present in my tester, and it still did an excellent job delivering sharp image quality with inputs done via the I-drive style control wheel.

However, the Mazda 3’s trump card is its spirited performance which is a trait that is not often found in its segment. Buyers can choose from two different four cylinder engines with my tester having the base 2.0 liter naturally aspirated four cylinder engine. Good for 155 horsepower, this is the same unit that also sees duty in the Mazda Miata roadster, and rewards the driver with impressive levels of spunk and tenacity. An optional 184 horsepower 2.5 liter engine is also available, but I recommend sticking with the lighter and slightly more fuel efficient base engine. This is especially true when hooked up to the standard six speed manual transmission. Unlike the 6-speed in the Toyota Corolla I recently tested, this one is perhaps the slickest gearbox I have ever experienced. Boasting smooth and crisp shifts, this transmission was very rewarding to operate, and had a very logical gear layout. The lone gripe I had with this otherwise stellar setup is the narrow spacing between 3rd and 5th gear which lead to an occasional accidental shift into 3rd when moving from 4th to 5th gear.

While the 2.0 liter’s performance figures ensures that it will never be a straight line screamer, it is on winding back roads where the 3 feels truly at home. The suspension does a good job soaking up bumps, but is still communicative enough to make sure that the 3 goes where it is pointed at with minimal body roll and excellent feedback from the steering wheel. There is some understeer, and the occasional chirp of the tires reminds you of the 3’s limits, but it is not alarming, and allows the 3 to be one of the best fun for value choices in the segment.

Pricing for the 2016 Mazda 3 starts at $18,895 for the base i Sport model with Grand Touring models starting at $23,595. My Blue Reflex Mica hued tester had a final price of $23,435 partly due to its relative lack of optional equipment with a $70 rear cargo mat being the only notable extra equipped to it. This bargain price makes it a compelling cross shop with the $23,225 Ford Focus Titanium sedan, while also allowing the car to cost less than the range topping $23,995 2016 Chevrolet Cruze Premier. It’s also important to remember that both of these trims do not offer a manual transmission, and that can give the Mazda an edge in luring young tech savvy enthusiasts to the sporty Mazda3.