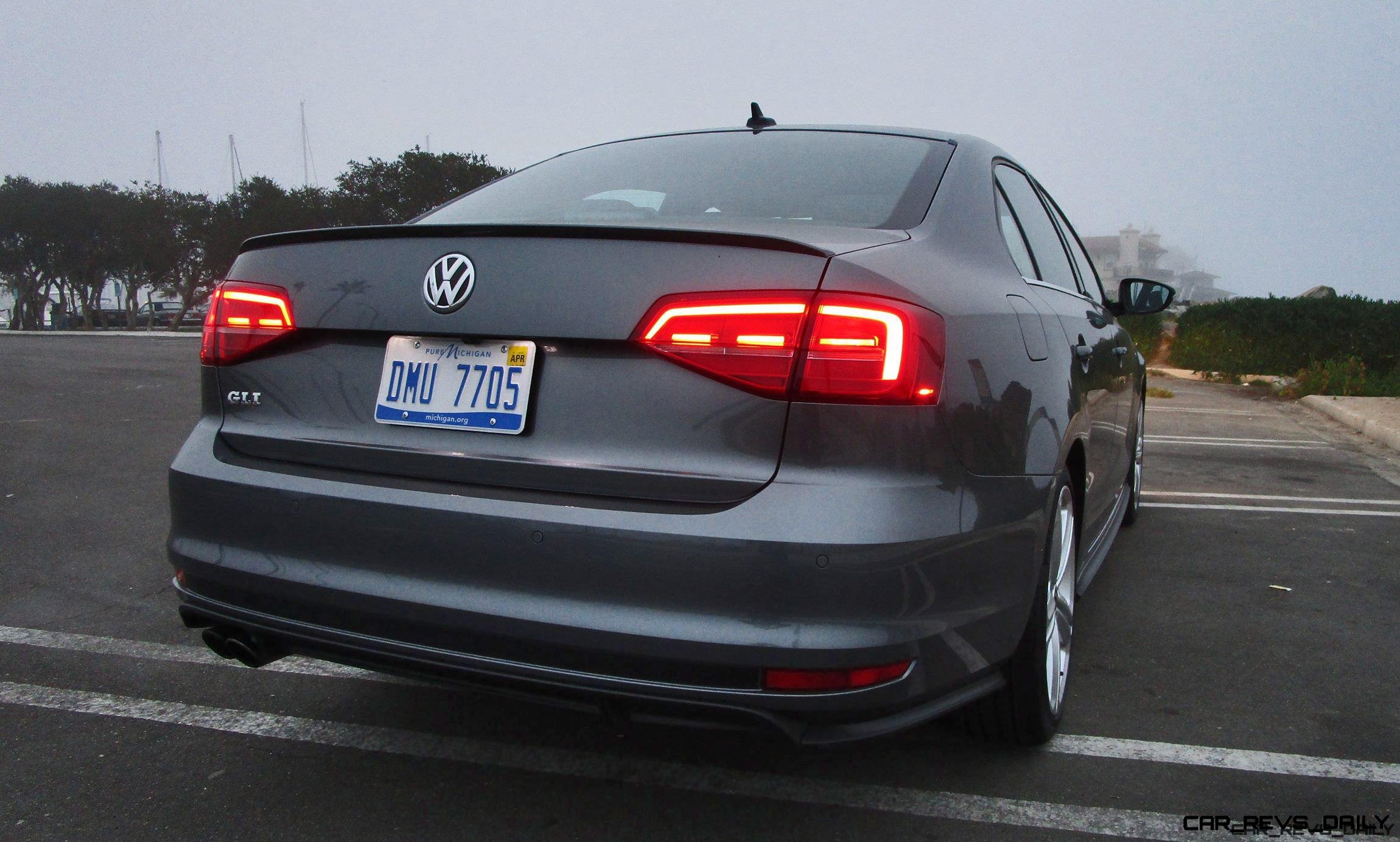 Crave the delectable deliciousness of a German Sport Sedan, but don’t have the coin for an Audi, BMW or Benz? We’ve got a solution for you.

Yes, a Jetta. With all the heavy-duty incentive, low-low financing, come-on-down-to-your friendly V-Dub dealer ads for garden variety Jettas, you might have forgotten VW’s love letter to the Sport Sedan.

And it’s a tough world for sedans these days. With the heat for crossovers and the newfound interest in hatchbacks, the pickings for the discerning sedan driver on a budget are few. In the spectrum of things, there’s the hard-edged WRX – torched by many enthusiasts when they stopped bringing in the hatchback – and on the softer side, the sporty Sentra NISMO we recently enjoyed. But neither have that European road feel, and once you’ve sampled it, you notice its absence.

That unique Germanity starts with tasteful exterior design. Baked to perfection over several years, we think the 2017 version GLI is the best yet. The sharp, crisp lines remain, but the details like the halogen headlights with LED running lights, black mesh upper and lower grilles with tasteful red accent stripe, LED taillights, rear diffuser, and subtle lip spoiler give tasty hints of sport.

VW has simplified the GLI lineup this year – there’s only one model – so the wheel you get is the 18” split-spoke Mallory, and that’s ok with us, since it’s handsome and fills out the wheel wells. Our tester even had a very Teutonic color, Platinum Gray Metallic, looking expensive and suiting the chiseled lines extremely well. Other restrained offerings include Pure White, Deep Black Pearl, White Silver – and for the extrovert, Tornado Red.

Inside, the theme of sport with refinement continues. VW interiors always look like expensive, and the GLI continues. By going to a single model, you’ll have to do without leather, but the Titan Black V-Tex Sport Leatherette is as nice as you’ll find in any BMW, and the subtle red stitching perks things up a bit. Soft touch materials in the cabin comfy up the GLI over lesser Jettas as well.

The front seats are very German – firm and supportive – and while they might feel a little hard at first sit, they’re supremely comfortable on longer hauls. Heated for chilly mornings, and power adjustable for anytime.

Rear seats feature plenty of space, even for adults – noticeably more than the GTI hatchback. If you’re schussing the slopes, you can use the center armrest and pass-through, or take advantage of the split-folding rear seats for larger items. It’s not a full-on hatchback, but there is plenty of room.

The driver gets a nice leather-wrapped sport wheel with a D-shaped bottom and multi-function controls, while a large tach and speedo dominate the instrument panel and flank a large, color multi-function trip computer display. Springing forward recently meant changing the GLI’s clock, and the display’s intuitive design made it a snap.

VW updated the info-tainment system last year, and now it’s one of the best. Standard on the GLI is a 400-watt, Fender Premium Audio system with nine speakers and a trunk-mounted subwoofer that sounds fantastic. Adding to that is a 6.3-inch touchscreen display with Apple CarPlay, Navigation with one-shot voice destination entry. It even predicts possible destinations based on often-used routes. Between that and using the Maps on your iPhone, if you get lost or run late, don’t blame the car.

Well actually, you can blame the car, because it’s such a good drive, you might not want to stop. The GLI has always had to play a bit of the plain sister to the GTI hatchback, and that still continues here. If you’re after ultimate performance, a GTI or Golf R is the way to go. Along with that ultimate performance, however, will come lots of attention from anybody driving any other hot car, and the local law enforcement community.

We’ll take the low-key GLI, thanks. Under the hood is a powerful 2.0-liter, turbo 4-cylinder that kicks out 210 horses and max torque of 207 lb.-ft. at just 1700 rpm – barely off idle. Combine that with a feelsome clutch that’s neither too light nor heavy, and a direct 6-speed manual gear box, and you have strong power anywhere you want it.

It’s an especially interesting drive, as the motor for all the world, sounds like the old Audi 5-cylinder, with a gruff warble that adds some nice texture to an engine that’s happy to rev.

Through it into a turn, and you find the steering has nice heft and feel, making it easy to place where you want. The GLI’s suspension is a nice blend of firm and supple – proving the point that if a system is well designed, you don’t need a bunch of electronically adjustable modes.

That said, the GTI Performance Package limited slip would be awesome here, instead you get the electronically controlled version that does an admirable job up to about 7-8 tenths, and then starts dialing it back.

But that actually is ideal for the GLI. This is a car that you want to drive quickly, comfortably, to take on a good twisty road. You don’t feel the need to wring out its neck and flog it mercilessly. It’s rapid, refined, transport that’s great for the driver and comfortable for passengers. Pure Sport Sedan.

So while the world may be going hatch and crossover crazy, we’re still huge fans of the 4-door sedan. Especially when it’s a wonderfully put together, great to drive, handsome, and sensibly priced European sport sedan, like the VW Jetta GLI.