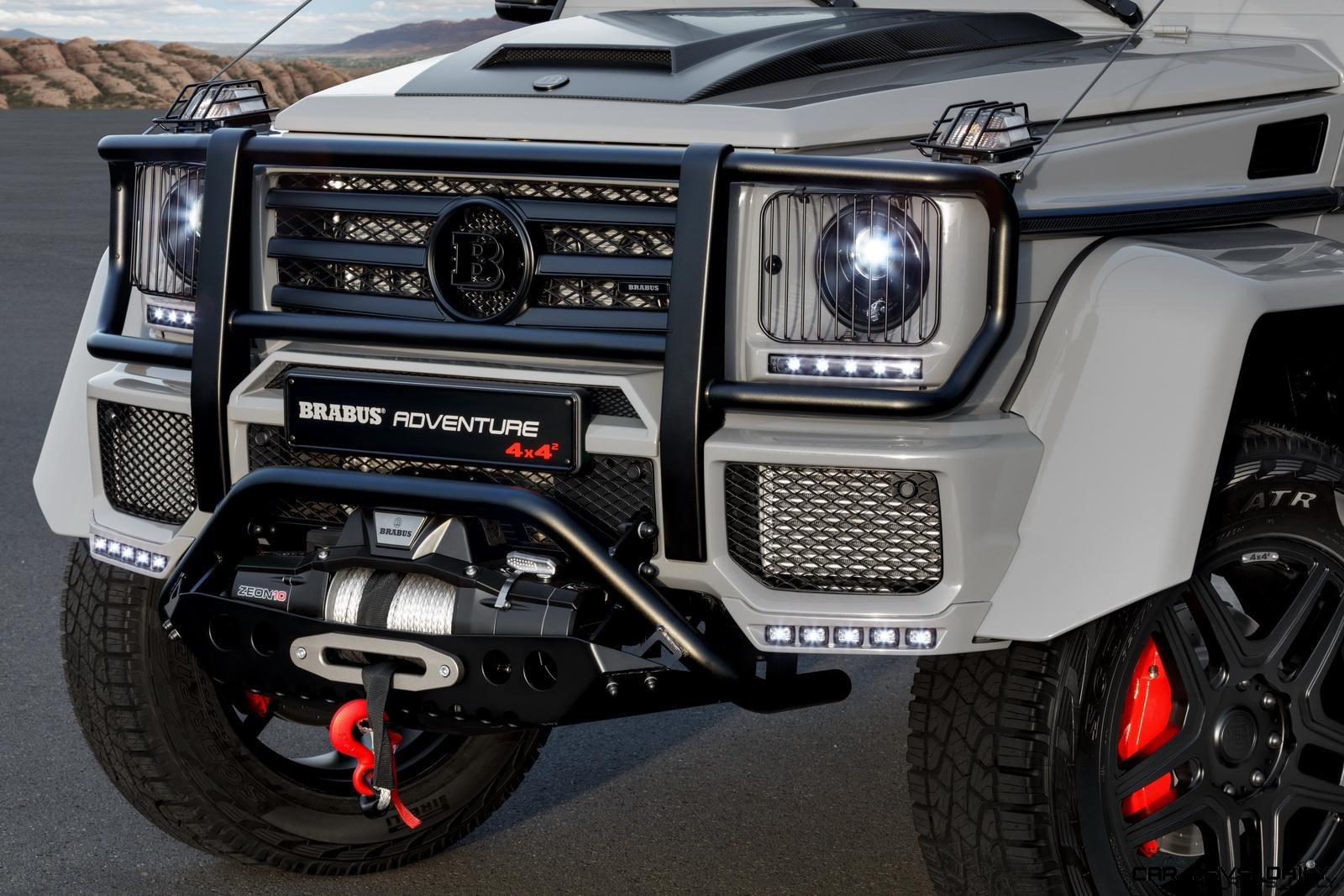 Brabus starts with G550 4×4-squared mod with one of the most pumped-up factory trucks of all time: the G-Class 4×4.  This widebody, lifted offroad special now has a huge bump in power, sound and jungle capability.  Brabus sells the complete vehicle — which is convenient one-stop shopping for the world’s millionaire travelers!

This is guaranteed not solely by the super powerful V-8 engine, which accelerates the tremendously high-riding off-roader from rest to 100 km/h (62 mph) in just 6.7 seconds. Due to the aggressive off-road tires, the top speed is limited electronically to 210 km/h (130 mph).

The interior is refined with an exclusive BRABUS fine leather Mastik leather/Alcantara interior, whose choice of colors follows the paint finish of the BRABUS 550 ADVENTURE 4×4².

When a cross-country vehicle has “ADVENTURE” in its name, off-road capabilities are of course at the very top of the performance specifications for the engineers. The BRABUS engineers and designers consequently chose the Mercedes G 500 4×4² as the perfect basis for the most off-road-capable BRABUS supercar ever, the BRABUS 550 ADVENTURE 4×4². To give the off-roader with extreme ground clearance an even more spectacular appearance while giving it even more off-road prowess for driving far off paved roads, they developed an extensive package of BRABUS ADVENTURE equipment. Of course, the individual components are also available separately for any other current Mercedes G-Class model.

Immediately striking at the front is the combination of front bumper guard, underride guard and winch. Robust wire mesh protects the black-tinted BRABUS xenon headlights and the turn indicators on the fender. In concert with the daytime running lights, which are mounted using special front bumper attachments, the newly designed lamps replace the production lighting components at the front.

In addition, the face of the ADVENTURE is characterized by an additional panel below the matte black radiator grille with integrated BRABUS logo. The BRABUS hood scoop is made from matte naked carbon, and adds another distinctive highlight.

Brush guards running from the grille guards to the roof rack are also part of the heavy-duty off-road concept of this supercar, as is the additional lighting unit on the black roof rack of the BRABUS 550 ADVENTURE 4×4². To the front, the naked carbon module turns night into day with two powerful LED modules when the driver switches to high beams or operates the headlight flashers. At the rear, the two corners of the roof are fitted with power-adjustable LED searchlights, which can be rotated and panned by remote control. The taillights are likewise protected by robust wire mesh.

The pivoting spare tire carrier with carbon cover and 4×4² logo holds a complete wheel of the same size as the four wheels on the car, which is also a safety factor not to be underestimated. Due to the high entry, BRABUS offers special power-retractable steps that make climbing in and getting out of the cross-country vehicle easier and safer.

The BRABUS bodywork conversion also includes a striking rear bumper with integrated fog and backup lamps as well as a central deflector. Carbon covers with a matte finish for the door mirrors round off the martial appearance of the extreme off-roader.

To give the BRABUS 550 ADVENTURE 4×42 even more off-road prowess, BRABUS custom-developed the electronically adjustable BRABUS special suspension, which is controlled by the driver with the BRABUS Touch Control Panel in the cockpit. It uses height-adjustable struts made from high-strength aluminum, which reduce unsprung masses and optimize heat dissipation. The individual setting of the ride height at the front and rear axle allows dialing in the wheel loads precisely. The design features an expansion chamber at each strut, resulting in a 15 percent higher damper fluid volume and thereby tremendous reserves even under maximum loads.

The BRABUS Touch Control Panel also operates the winch and the lighting module on the roof. In addition, it also features a so-called “black-out switch,” which turns off all the vehicle lights a single tap of a finger.

The twin-turbo four-liter eight-cylinder engine of the Mercedes G 500 4×4² is rated at 310 kW / 422 HP (415 bhp) ex-factory and is thus an excellent basis for the new BRABUS B40-550 PowerXtra performance upgrade. Two high-performance turbochargers with larger compressor unit and a special core assembly with reinforced axial bearings produce a higher boost pressure. Also included is the matching plug-and-play BRABUS PowerXtra auxiliary control unit, which is adapted to the electronic engine control unit and provides modified boost pressure control and optimized mapping for injection and ignition.

The result of these modifications fully lives up to the spectacular appearance of the off-roader: an added 94 kW / 128 HP (126 bhp) of peak power and 190 Nm (140 lb-ft) more torque make the cross-country vehicle tipping the scales at more than three tons significantly more agile.

The rated power output of 404 kW / 550 HP (542 bhp) at 5,600 rpm and the powerful peak torque of 800 Nm (590 lb-ft), on tap constantly between 2,250 and 4,750 rpm, harmonize perfectly with the automatic transmission, whose seven gears can also be shifted manually with the ergonomically shaped BRABUS aluminum paddle shifters on the steering wheel.

Of course, like all other BRABUS components, this performance upgrade is backed by the three-year, 100,000-kilometer/62,000-mile BRABUS Tuning Warranty (see BRABUS Warranty Terms and Conditions, updated July 2013), which is unique in the industry. BRABUS exclusively uses hi-tech lubricants from technology partner Motul.

Sound, performance and longevity are the outstanding traits of the BRABUS stainless sport exhaust system with actively controlled exhaust flaps. It allows drivers to choose between a subtle “Coming Home” mode and a decidedly powerful engine sound in the corresponding “Sport” position at the touch of a button in the cockpit. The BRABUS exhaust system also adds some thrilling visual highlights with two black chromed tailpipes in an unusual sidepipe design on the driver’s side.  For this reason, the running board on the left side of the vehicle deploys only below the driver’s door. The two exhaust pipes on the passenger side remain obscured by the running board deploying under both doors.

Of course, the BRABUS 550 ADVENTURE 4×4² on display at the Geneva Auto Show 2017 was fitted with an exclusive BRABUS fine leather interior with individual power rear seats in the company upholstery shop. The especially soft and breathable Mastik leather was precisely color-coordinated with the outer skin of the off-roader. The black perforated leather on the center sections of the seats and the inner sections of the door panels is finished with the same masterful artistry as the light slate grey leather surfaces quilted with pinpoint accuracy on the seat bolsters. For contrast, red piping was incorporated in various places. Aluminum components such as BRABUS pedals and door-lock pins add markedly sporty highlights.

The BRABUS center console for the rear compartment of the Mercedes G-Class was developed as an equally practical and stylishly integrated feature. The new interior component provides an elegant separation between the two individual rear seats. It incorporates a BRABUS Touch Control Panel with 4.3-inch screen, whose homepage displays a clock with analog display. All seat functions including the memory feature and the integrated seat ventilation and heating are controlled with this panel.

In addition, this control also adjusts the volume of the standard COMAND system and turns the gimballed LED reading lights above the individual rear seats on and off. Another useful feature is the USB multimedia port, which allows connecting a smartphone or tablet with the COMAND system, and charging them at the same time. There are also two cup holders that can keep drinks cool or warm as desired. For added practicality, the BRABUS console also has an integrated secure compartment to protect valuables. It opens electronically controlled after entering the code on the touch control panel.

The BRABUS 550 ADVENTURE 4×4² is available as a complete vehicle. Vehicles already in customer hands can be converted all at once or in stages.