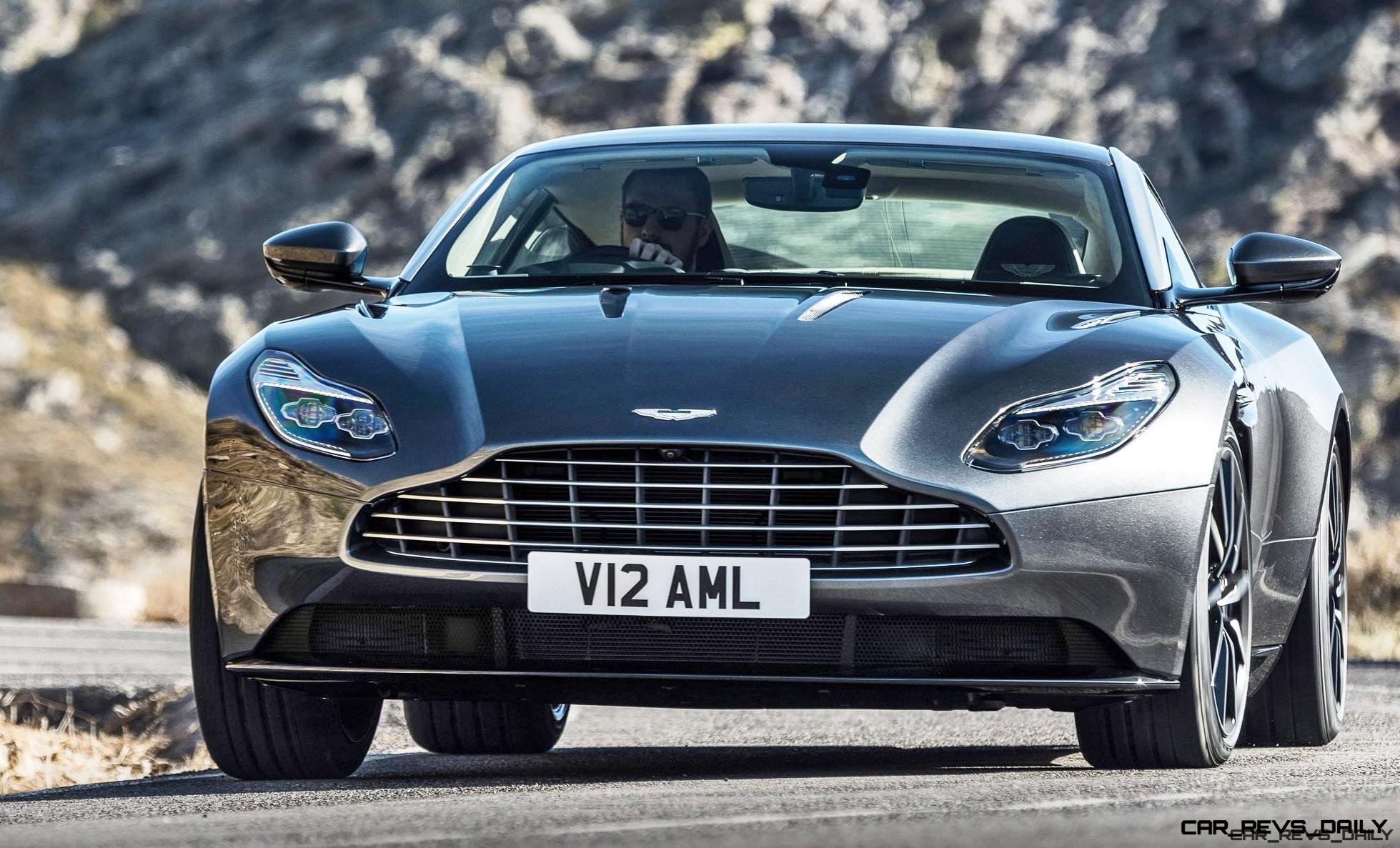 The huge news is of course the DB11 design outside — which is a radical advancement over the similar-looking models in DB9 era.   A new floating roof and C-pillar forms a functional aeroblade in the back of the roofline — in very sexy fashion.  A wider, deeper Aston single-frame grille is more true to the original DB shapes from the 1960s, and is deeply modern and elegant.  And more crucially: brand-new from even 100 paces!

THe brand-new details continue under the skin and inside the car: an all-new 5.2-liter V12 — this time featuring twin turbochargers!

Power output is a round 600HP, while sprint pace is down at least a half-second versus the quickest Vanquish today — into the mid 3s.

ASTON MARTIN UNVEILS THE DB11: THE LATEST IN AN ILLUSTRIOUS BLOODLINE

1 March 2016, Geneva: A new chapter in Aston Martin’s history began at the 86th International Geneva Motor Show with the unveiling of the DB11. The first product launched under the company’s ‘Second Century’ plan, DB11 is the bold new figurehead of the illustrious ‘DB’ bloodline and an authentic, dynamic sporting GT in the finest Aston Martin tradition.The DB11 showcases a fresh and distinctive design language, pioneering aerodynamics and is powered by a potent new in-house designed 5.2-litre twin-turbocharged V12 engine. Built upon a new lighter, stronger, and more space efficient bonded aluminium structure, DB11 is the most powerful, most efficient and most dynamically gifted DB model in Aston Martin’s history. As such, it is the most significant new Aston Martin since the introduction of the DB9 in 2003.

Aston Martin Chief Executive Officer, Dr Andy Palmer said: “We aspire to make the most beautiful cars in the world.  DB11 is the absolute embodiment of what an Aston Martin should be and we have worked tirelessly to ensure that DB11 combines both exceptional design with the latest technology throughout. A brand new bonded aluminium platform, clever aerodynamics, a new characterful twin-turbo V12 and class-leading infotainment systems are just a few aspects which make this the sports car that will proudly spearhead Aston Martin’s second century plan.”

Heralding a new design era for Aston Martin, DB11 is the latest landmark in a remarkable aesthetic journey; one that gave us icons such as the DB2/4, DB5 and, most recently, the DB10 developed specifically for James Bond. DB11 re-imagines the relationship between form and function with a series of fresh design signatures. Foremost amongst these are the front-hinging clamshell bonnet, distinctive LED headlights and accentuated lines of the iconic Aston Martin grille. The profile is equally dramatic, thanks to the roof strakes that flow uninterrupted from A-pillar to C-pillar. The clean lines continue at the rear, with a sloping decklid that smoothly blends into boldly sculpted tail-lights to create a new and unmistakable graphic.

Innovative aerodynamics play their part in this aesthetic revolution with clever management of airflow both over and through the bodywork aiding stability while preserving the DB11’s uncluttered surfaces. Front-end lift is reduced by the gill-like Curlicue which releases high-pressure air from inside the wheel arch via a concealed vent within the redesigned side-strake. Meanwhile, rear-end lift is reduced by the Aston Martin AeroBladeTM; a virtual spoiler fed by discreet air intakes located at the base of each C-pillar. Air is ducted through the bodywork, before venting as a jet of air from the aperture in the rear decklid.

Like every Aston Martin, the heart of the DB11 is found beneath the bonnet, though unlike any Aston Martin before it, the DB11’s heart is a 5.2-litre twin-turbocharged V12. Designed in-house this new engine develops 608PS1 (600BHP1) and 700Nm1 of torque, making DB11 the most powerful production DB model ever. Naturally, it’s the most dynamic and most accelerative too, with a top speed of 200mph1 and a 0-62mph time of just 3.9sec1. Thanks to intelligent bank activation and stop-start technology that potency is matched by greatly improved efficiency.

To exploit the advantages of its new body structure and harness the immense performance of the new twin-turbo V12 engine, the DB11’s chassis, suspension, steering and electronics have been re-imagined  and key new technologies embraced. Multiple driver-selectable dynamic modes – GT, Sport and Sport Plus – progressively intensify the response of the engine, 8-speed automatic ZF transmission together with the new electric power steering and Torque Vectoring by braking while increasing the firmness of the adaptive damping for a greater sense of agility. The result is a driving experience that combines exemplary ride comfort and true sports car agility, for an extraordinary breadth of dynamic capability.

With wider door apertures, significantly increased occupant space – especially head and legroom in the rear – fully integrated rear ISOFIX mounting points for a pair of child seats plus a luggage compartment large enough to accommodate two large holdalls plus carry-on baggage, the DB11 is a genuine Grand Tourer. Thanks to an inspiring palette of colours and a vast array of detailing options, its interior can be perfectly in-tune with your unique personal style. From calming, carefully co-ordinated tones to sharp contrasts in hue and texture, your choices are virtually limitless. Nexus quilting and Celestial perforation add layers of beautiful complexity and intrigue, while ornate leatherwork, such as intricate brogue detailing, creates areas of visual and tactile delight.

Dr Andy Palmer said: ““This is not only the most important car that Aston Martin has launched in recent history, but also in its 103-year existence. The DB11 rightfully places Aston Martin once again as a leading brand in the luxury automotive market”.