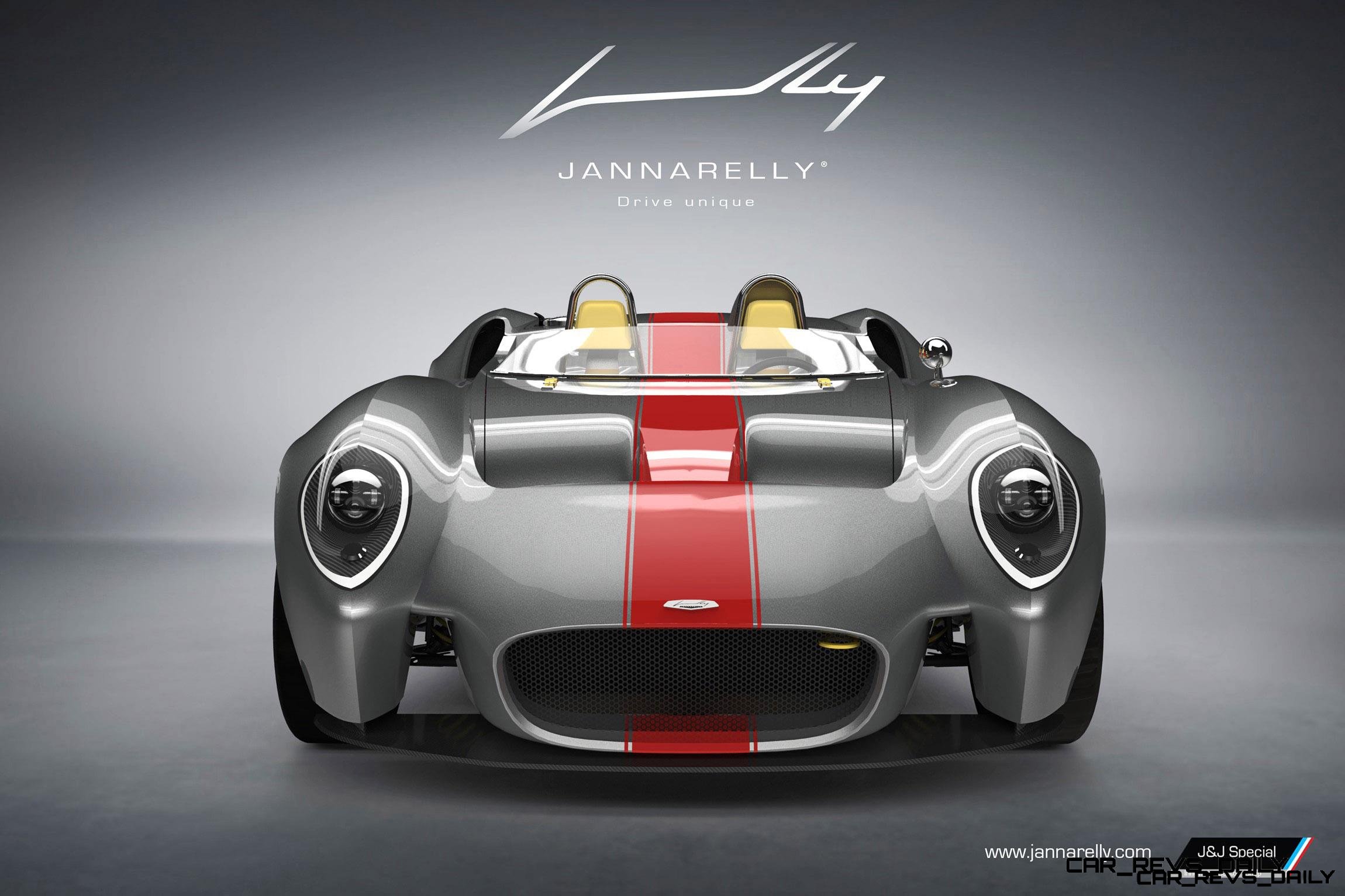 WHat happens when two of the most skilled talents in bespoke supercars come together?  Fusing design vision, carbon-fiber production and a bit of marketing magic?

The JD1 from Jannarelly Design!

This is a fantastic bit of absolutely breaking news: Anthony Jannarelly is a clear favorite of ours since obsessing over his crisp, layered aesthetic as seen on the W Motors Lykan and Fenyr, plus the recently-revealed Zarooq SandRacer.

This new venture pairs Jannarelly with Frederic Juillot, lead at Equation Composite, to make their own supercar vision a reality.

A look behind the curtain of the two Frenchmen’s lives shows that their skills are much more than contract design or fabrication work.  And their passions?  Trackday DRIVING.

They know how to design an entirely bespoke Mig-Welded chromoly spaceframe like the world’s best racecars, and how to produce the bodywork in ultra-light aluminum.  CNC milling for the suspension and subframes?  Yep.  Now we will find out…. Do they know how to take it to market?

The JD1, after this long and gushing intro, clearly has a charmed entry into the hypercar world. Its absolutely heavenly design details, proportions and futuristic style are a major step forward in the world of Dubai-based auto startups.

The best thing?  This is not just a fantasy set of renders. The car is one the way to its debut in early 2016, with first orders arriving to buyers around August of 2016 as a 2017 model-year.  The best part?  Entry pricing from just $55k!

Let’s break out the JD1 details in two sections below, Design and Performance.

The design of the JD1 is absolutely unlike anything seen so far from W Motors or Zarooq, but is somehow just as fresh and futuristic. This is a huge achievement considering the deeply retro ethos and mood of the roofless roadster design.  There are elements of iconic supercars like the Shelby Cobra around the rear fenders, but nothing overt and all re-expressed for the 2020 and beyond.  This Shelby comparison is slightly apt for the long and deeply convex hoodlines too:   there is major flow and smoothness to the curves wrapping a powerdome hood and fendertops.  There is retro flow in profile, yes, but look closer.

The nose is carved-out with the front fenders actually free-standing wing elements, separate from the deep air channels beside the bumper on both sides of the front grille.

And the aero sexiness of the carved nose planes from here go ultra-modern: the hood is carved with deep reverse hood scoops to pipe out hot vent air up and over the machine.  No air will be trapped in the balloon wheel-wells either: deeply carved lower fenders behind the front axle jet the air back past a rising hockey-stick of rising sill and out to the sides of the car.  Tall sidewalls of the JD1’s tires and fairly compact wheels have a nicely retro charm — causing the euphoric dissonance we love so much about Jannarelly’s style.

There is a flat plane of sill on horizontal carbon-fiber running the length of the machine below the cabin, but breaking the solid surface again with a sexy lower air vent ahead of the rear axle. Feeding cool air to the brakes?

But there is also a giant intake scoop on both sides of those Shelby-sexy rear fenders?

Here is the real genius of the JD1 — the car is rear-engined!

We had to triple-check the tech specs, but yes. Despite its gorgeous, Caterham and Donkevoort-like overall proportions, the JD1 mounts its powerplant in the mid-rear. Behind the cockpit!  Thrilled barely describes the smile on my face as I type this.

Also smile-inducing?  Buyers can customize the look of the machine: windshields, rollbars, trunk detailing and other elements can be tailored to individual preferences.

Our favorite:  the long-tail model with full ground-effect carbon and speedster windshield, but skipping the roll bar!  All are exquisite though.

The JD1’s shocking design beauty and magnetism skews retro at first, then modern, and finally something right out of the future sketchbooks of our dreams.

And not just a static display.  Far from it.  This is a SIDEWAYS action thriller!

The powerplant’s mid-mounted location ensures outstanding performance and thrilling handling, even without a massive W16TTTT like the new Chiron.

In fact, just 304-horsepower is enough to rocket the JD1 to 60-mph in 4.0-seconds.  How?  A curb weight of just 1600-pounds!  Every component and detail on the tech specs below points to joyful track handling and laugh-out-loud playfulness at every turn of the ultra-quick racing steering rack.

Power is via a 3.5-liter V6 through a six-speed manual and LSD to the back wheels.  We speculated previously that this same-size engine in the Zarooq Sandracer is sourced from the Infiniti G35, but do not know for certain.  (Update: Jannarelly confirms the JD1 will launch with the Nissan VQ35 crate engine, with others possible for a big price premium.)

An exciting next step for the Jannarelly Design-1 launch model?   An even more powerful version with forced induction!  Zarooq has promised 400- and 500HP variants of its somewhat-similar rear-engine layout — pointing to the possibility here as well.

That is assuming the motoring world is as keen on Jannarelly as we are.  But all evidence — and Fast/Furious 7 making the Lykan Hypersport its hero at the center of the plot — points to broad appeal for these next-gen supercars out of the UAE.

Bottomless investable resources, a huge home market for performance cars, and reach to tap into high-net-worth people worldwide via Dubai and Abu Dhabi!?

The best part of all: plans to sell the car in strict markets like the US and Europe eventually.

The initial rollout will let the JD1 be street legal in the Middle East and Asia, but a track-only (technically) machine for the US at this point.

Even so, for the $55k entry price, the JD1 elicits passion and thrills missing from the $75k Boxster and Elise.

A retro daydream… reborn for the future…. and available TODAY?

A unique, high-performance, customizable sports car you can’t wait to play with. Track ready, lightweight, involving and rewarding to drive.

Dubai, December 16, 2015 – Anthony Jannarelly, designer of the W Motors Supercars and Frederic Juillot, owner of Equation Composite, a company specialized in carbon fiber parts, announced that they combined their skills and talent to create a new sports car called the Jannarelly Design-1.

Both passionate and owners of a Caterham and a Donkervoort respectively, they show a great admiration for classic car design with timeless lines as well as the essence of the 60’s motoring era.

The new brand, centered on automotive emotions is all about self-expression and creativity. Its whole purpose is to allow a great freedom in self-customization and pure performance. The first model takes inspiration from the universe of Petrolicious, Jay Leno’s garage and Magnus Walker.

The pair began with a straightforward concept: A really simple and mechanical car with state-of-the-art components, that can be customized until it reflects its owner, in a pure outlaw spirit similar to the projects created by Porsche fans.  Speaking of which, Ferdinand Porsche’s famous quote “I couldn’t find the sports car of my dreams so I built it myself” couldn’t be more apt for the duo. Both the Jannarelly’s lines and its simple and flexible mechanical approach pay a reverential tribute to the golden age of the sports car, when design and technology were in perfect sync, generating organic, feminine lines, naturally modeled.

The result is fresh and stunning.

The Jannarelly Design-1 brings together the best of two worlds: it is a keen mash-up of vintage lines, simple mechanics and modern materials that blend into a “car with a soul” as expressed by Anthony. As a designer car, the Jannarelly is all about style, creativity and self-expression. A cool mechanical beauty that allows personalization and features simple lines celebrating the 50’s and 60’s but with modern reliability and regulations compliance on top.

The Jannarelly isn’t a car that will underline your status but one that will also reflect what you look like on the inside.

As for customization, “you can play with body parts, add a windscreen, change the back side, add a hard top and aerodynamic elements… possibilities are endless’ Frederic says.  The more you play with it, the more you’ll express your personality. It is a car that you know from the start you will end up bonding with emotionally because of the time, care, creative effort and love you will put into it.”

The Jannarelly Design-1 is a rear wheel drive 2-seater roadster with a steel tubular frame and structural aluminium panels for the chassis. It is fitted with a mid-rear V6 DOHC 24-valve engine. Most of the body is made out of fiberglass and carbon fiber.

The two Frenchman are currently putting the finishing touches to the first prototype that will be ready in early February in Dubai, where the friends reside, although they are looking to distributing it in Europe and the US.

They are also working on a line of beautiful design objects inspired by automotive emotions, dedicated to car enthusiasts and fine connoisseurs. The first cars will be delivered during summer 2016 for our early clients.

The Special Launching Edition limited to 30 cars is priced at 55,000 USD

We invite you to contact us for any query at info@jannarelly.com