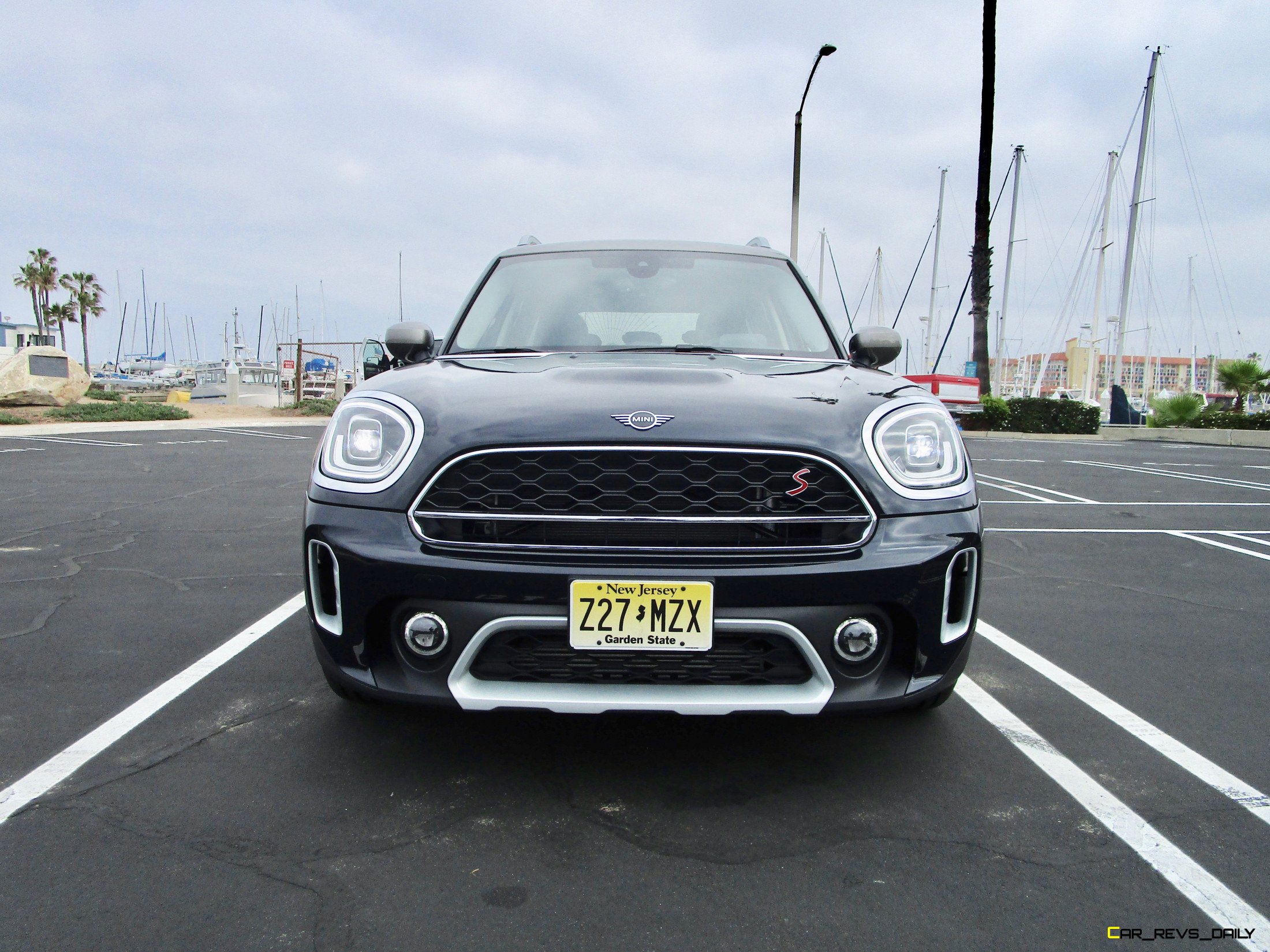 There have always been a percentage of people out there who love the MINI Cooper’s bulldog looks, cheeky attitude and British persona (although BMW has owned them since 2003)  but just found the diminutive hatch a little too small.

And MINI has been busy bringing in a variety of models, including the Clubman – longer and wider – and the Countryman – taller and wider. We’ve always liked the Countryman, it adds just enough usability to function like a small SUV, but still has that MINI charm. MINI points out that it’s the first model with an exterior length of 13 feet. And size matters – in the US, the Countryman accounts for close to 49% of all MINI’s sold.

For 2021, the model adds a fresh look and new tech to keep it competitive. So, is the largest MINI still a big deal? Let’s take a look!

Ok, every MINI makes us smile, but there’s some visual excitement on the 2021 that deserves a 2nd glance. While the Countryman is the largest MINI, in the grand scheme of things, it’s not a large vehicle. We think it’s just right. Good size for usability, but still living the MINI ethos.

The front end looks more rugged with a new grille design featuring a hexagonal motif and standard LED headlights and fogs on all models.

The profile retains the chunky ‘n cheerful tall hatchback look, made even better with our tester’s optional silver roof. New design 19-inch alloy wheels really give a capable look and add a bunch of visual pop.

The rear also gets LED rear lights, but with a touch of MINI whimsy, the taillights feature a Union Jack design that’s veddy British and very cool. We also loved the metal-look lower fascia and sporty dual exhaust pipes. The finishing touch, our tester’s Enigmatic Black gave it an added bit of menace.

Inside, there’s a nice blend of old and new. There’s the familiar personal-pizza-sized display in the center of the dash that in previous generations held a giant speedometer that was great fun to watch.

Gauges have migrated over the years to be behind the steering wheel, so the center stack is now your info-tainment center. Our tester had the optional 8.8-inch touchscreen (6.5-inch is standard), and that adds in Apple CarPlay and Navigation. It’s easy to use – it’s a touchscreen, or you can use the circular infotainment control on the console, ala BMW. And like its parent Bavarian company, the system is intuitive, all there are a lot of menus to scroll through.

Also familiar are the climate control with a cool row of toggle switches below, including a large red Start/Stop toggle for the engine. Call us geeks, but we love starting the engine with that.

The new part has a very interesting digital display for gauges, that looks suspiciously like a giant smartphone tilted on its side. With a cool matte finish, it works exceptionally well, and is easy to see day or night. And as you might remember, MINI gauges behind the wheel have never been all that large, anyway.

The Countryman must rank as the most comfortable of all the MINIs, with a taller height making for easier entrance, and upright seating that gives good visibility combined with excellent, supportive front seats. Those in back enjoy slide and recline rear seats, making this the most comfortable rear seat in any MINI as well. With a power rear hatch and easy folding of those rear seats, you’ve got a good sized cargo hold as well.

All in all, this is a useful package, with a nice blend of luxury, tech and comfort, all with that delightful MINI design.

A while ago, we tested the MINI JCW Countryman with a raucous rally-car attitude and a smile-inducing 301 horsepower. We knew our Countryman S wasn’t going to be another giant slayer, but hey, it’s a MINI, so we were sure it would be fun.

And it is! Under the hood is MINI’s familiar 2.0-liter, turbo 4-cylinder, here producing 189 horsepower and a fat 207 lb.-ft of torque at just 1,350 rpm. The 8-speed automatic is a gem, with smooth behavior in eco mode, but a sharp kick between gears in Sport mode. Put the MINI’s dynamic overall setting to Sport and you have a lot of fun with quick response and a  throaty snarl as it revs.

With ALL4 all-wheel drive, you can throw the big MINI around with confidence, and you feel that there’s plenty of grip. It definitely feels heavier than a front-drive MINI 3-door, but that is the compromise you’re going to make for a larger vehicle. Outside of the go-kart antics of the MINI, and maybe a Miata, you’ll find the Countryman small, agile and sporty, and it goads you on to zip around traffic and have lots of fun.

But, the Country is big enough that you can be comfortable for longer freeway trips and with a 31 mpg highway rating, you can be pretty efficient as you go about. Drive like a Miniac though, and your fuel economy will not be as stellar. But we love the turbo rush!

Well, let’s consider this is a premium brand, ok? If you’re enamored with the looks, but don’t need the more powerful S or ALL4 AWD, you can get into a Countryman for $29,100, you’ll be driving a turbo 3-cylinder with 134 horsepower, and it’s a surprisingly spirited little motor and also a fuel sipper though.

Stepping up to a Countryman S ALL4 is actually quite reasonable, with our tester starting at $33,900. Like it’s big brother BMW, how expensive you get depends on how deep you want to wade into the options. Our tester was pretty darn deep, starting with the Iconic Trim Package ($8,000), and a couple of small items including Silver Roof and Mirror Caps ($100) and Privacy Glass ($500). Add in $850 for Destination, and we range the bell at $45,850. Like we said, premium.

We were totally won over by the charming 2021 MINI Countryman S ALL4. Quick, capable, and with that unique MINI style and personality, it’s a one-of-a-kind SUV that just makes you smile!