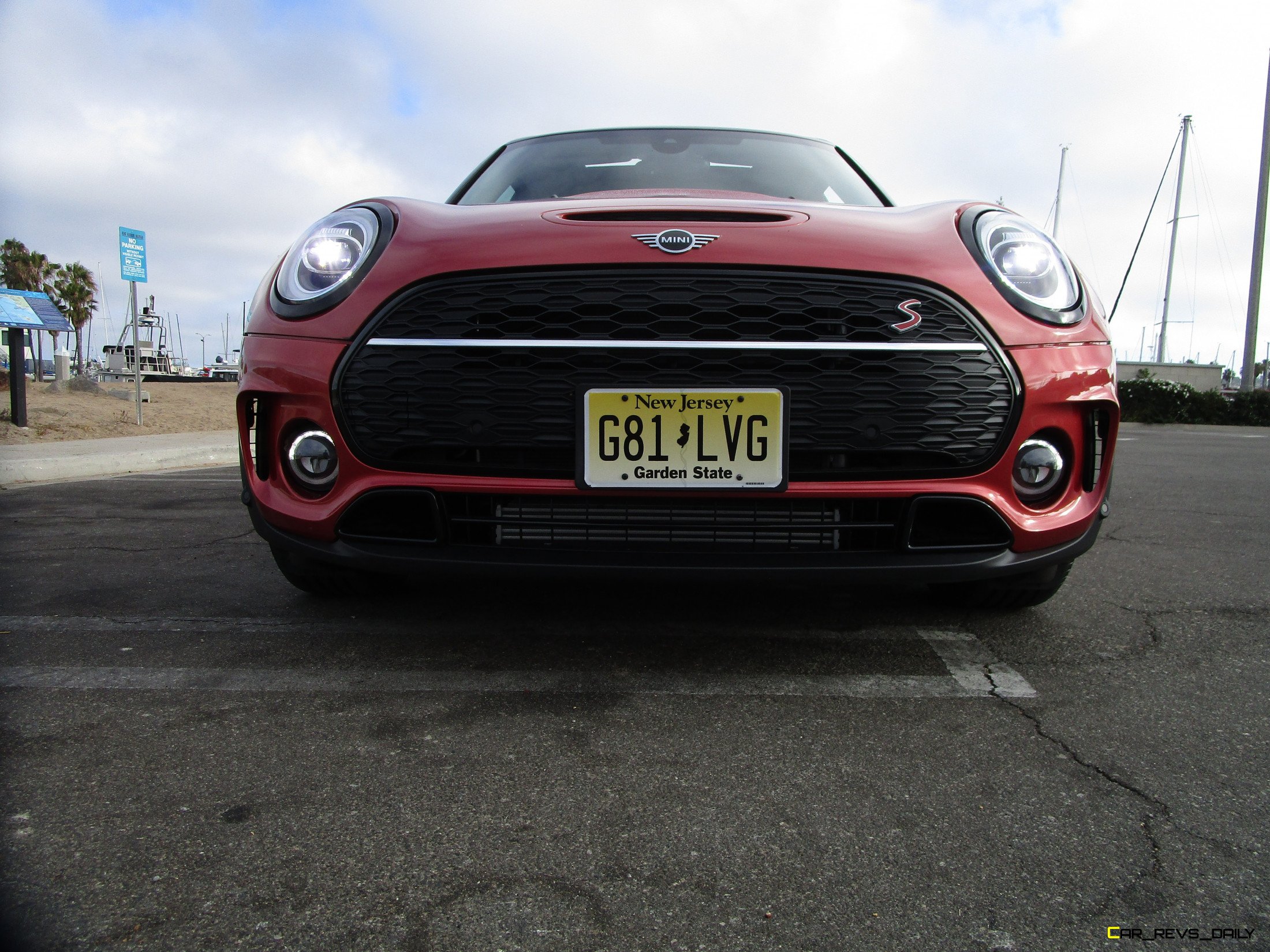 Is there anybody that still thinks MINI is a British company? Well, the truth is, it’s been part of BMW for a long time. In fact, many of the current BMW’s – like the X1 SUV – share MINI running gear. But that’s no reason to cry into your warm beer, as MINI is the best of both worlds.

While the stylists who surround the MINI product make grand efforts to keep the bulldog-style, the fun and whimsical vibe, the knowledgeable folks at BMW continue to massage and refine the product. Ever year, there’s lots of little improvements.

So, we were pretty excited to test the 2020 Clubman S. We recently tested the gonzo JCW Countryman, with an incredibly powerful 301 horsepower turbo four cylinder that gave it amazing performance in a small reasonable-looking package. Great, great fun.

This time, we are not in the JCW trim (darn!), but we have to say, even in S trim, the Clubman is a ball to drive. In some ways better even than that Countryman.

Let’s start with the back first for a change. The split rear doors have been a bone of contention for some since the modern Clubman was introduced. On the plus side, the shorter doors don’t take a lot of room up when they’re opened, and they give good access. The big problem is when they are closed, they put a large pillar in the middle in the line of sight of your rear view mirror. We would say we got used to it, but never really liked it.

What we did like was the re-do of the rear lights with a Union Jack design. Clever!

Up front, the changes are notable for 2020 with a redesigned grill, headlights and fog lights. Piano black exterior trim gives nice contrast. There’s a very unified sense of design now – all the parts flow together in a mature design that looks premium. The Clubman’s wide track is readily apparent too – the Clubby looks low, wide, and dare we say, a bit mean.

The profile has that long look compared to the 2-door MINI, but it’s well balanced and pleasing to the eye. New design 18-inch Multiray Spoke 2-tone alloy wheels look sporty and give some visual heft to the design. Our tester was finished off in a new color, Coral Red Metallic that’s a light, strawberry smoothie tone that looks upscale. If you’re not into strawberry, there’s also a new MINI Yours Enigmatic Black Metallic.

Inside brings you the unique style that you’d expect from MINI, but over the years, they’ve been massaged into good ergonomic design. An example – MINI used to put the power window controls on the toggle switches in the center console, but thankfully, they’re now mounted on the doors where most owners would expect them.

There’s still a giant circular display in the middle of the dash that used to house a giant speedometer, but is now used for a state of the art info-tainment system. All the goodies like Apple CarPlay are there, and it’s activated by a BMW-like circular knob and pushbuttons that falls easily to hand on the behind the shift lever.

Beneath the display is a climate control system, with buttons underneath, plus the traditional MINI toggle switches, assigned to useful things like parking warning, on/off for engine Auto Stop, traction control and Sport/Eco model. In the middle of the toggles is a larger bright red engine start/stop button that we love – you feel like you’re starting up your own WWII fighter plane every time you kick it over. Great fun!

A nicely-sized speedometer with a semi-circular tach are behind the front wheel. Which in our teseter was a very sporty leather-wrapped John Cooper Works steering wheel. Which brings us to another thing about MINI – you can custom order your trim and features to an amazing degree. Our tester made it simple however with the Iconic Trim package – which included power front seats, auto climate control, Harmon Kardon Audio system, and the touchscreen navigation package.

It works beautifully with Cooper S sport seats which are superbly comfy, finished in a light Satellite Grey color with dark piping and elegant-quilted inset panels that nicely offset piano black trim. The extra length of the Clubman over a standard MINI is immediately noticeable in a rear seat that can comfortably fit adults.  With the rear seats up there is a good amount of cargo space, and with them folded you have a nice size cargo hold. It’s actually about the same as the taller MINI Countryman – a nice surprise. But this is still a MINI, the compact overall dimensions make it one of the smaller vehicles for carrying cargo – but it pays the dividends elsewhere.

And those dividends are in your name as soon as you start up the Clubman S. Starting up the 2.0-liter turbo four cylinder brings a nice “whump” and the throaty exhaust settles into a nice burble.

After time in our recent JCW Countryman with 301 horsepower we thought we might be spoiled, but not the case – with 189 hp and 207 lb.-ft of torque, the Clubman S is extremely quick and powerful. Part of this has to do with our tester being front wheel drive, (AWD is available) that saves weight, and the 7-speed dual-clutch auto transmission that loves to play – especially in Sport Mode.

Where our JCW Countryman was a rocket, it was so fast you quickly ran out room – and speed limits – to enjoy it. The engine note is not too loud, but easily heard, adding to the fun. The Clubman is right in that perfect zone where it is certainly quick, but you can still wind it out and enjoy it without calling too much attention to yourself.

Also, power is only part of the equation – like all MINI’s the Clubman S is an adept handler. In fact, with the longer wheelbase and wider stance, it feels more stable in the turns, while still having the agility that lets you slice, dice and julienne fry traffic on your commute.

The steering has a nice heft and excellent feel (better than many of the BMW products right now!), and it’s easy to place the Clubby where you want it on the road. Damper Dynamic Control serves up a firm, well-controlled ride when you’re zipping around, and a surprisingly supple experience when you’re kicking back. We really didn’t kick back muc,h but still enjoyed 28 mpg combined during our time with the Clubman.

It all adds up to the kind of vehicle that you’re always looking for an excuse to drive – run to the store? Drop mail off at the post office? Sunday cruise. Yes, yes, yes!

Well, just like BMW, that depends on how friendly you decide to get with the option sheet. Our Clubman S started at $30,000, which is pretty great value for a slick European performer with great unique style. Our tester had the Driver Assist Package ($850) which includes Park Distance Control, Active Cruise Control, Heads-up Display and Parking Assistant. Good Value.

We also had the Iconic Trim which gives you loads of unique design, info-tainment and comfort features plus the Touchscreen Navigation package. It’s loads of features, but it’s also $8,000. Add in $850 for destination, and we rang the bell at $40,600. Consider our tester extremely loaded, and you could pick and choose features separately and keep it in the low the 30’s, which we’d consider a bargain.

It’s hard to consider anything a real competitor for the MINI Clubman – maybe a VW GTI which would come in at $38,215, or BMW’s own X1, which comparably-equipped came in at $41,200 similar drivetrain, larger more usable, but less unique and stylish, and probably less fun on the whole.