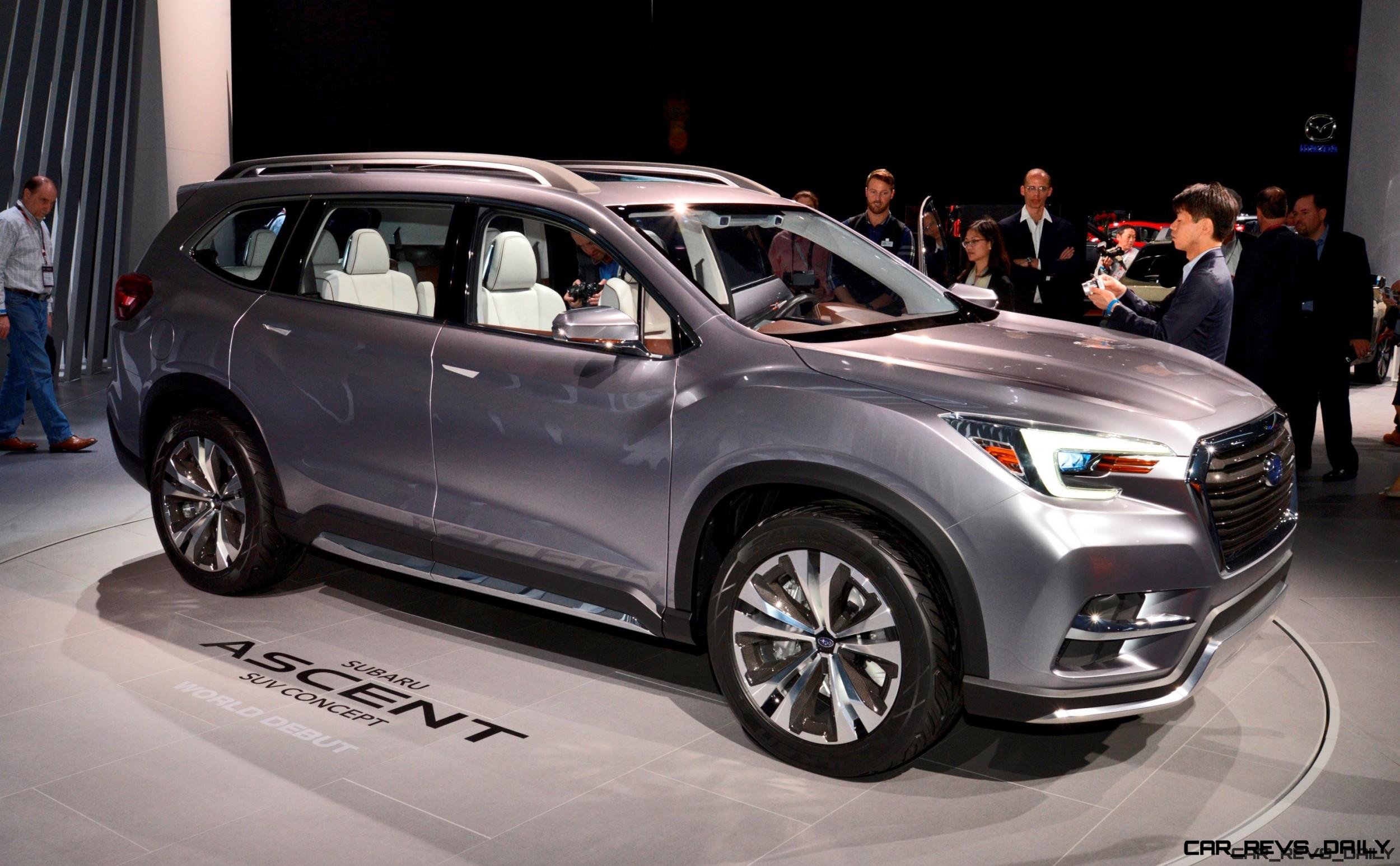 Subaru has been hinting and teasing its 3-row intentions for years now.  Since the Tribeca bowed out gracefully, in fact, we’ve seen VIZIV concepts galore.  We lost track. Maybe six concepts on that Viziv badge.  Refining what a seven-seat Subaru might be.

A new approach was needed, and we now have a 98-percent look at the finished, production product.  The high roofline adds nearly a half-foot of air inside the cabin versus the 5-seat Outback.   An all-new platform drops the floor dramatically in the second row too, giving what looks like amble wayback access and big captains chairs for the first two rows.

The Ascent looks like it will stick with four-cylinder turbo power instead of the 3.0-liter flat six that made the Tribeca so thirsty but also pretty slow.

Subaru only confirms that the Ascent will run an all-new turbo DI boxer engine and that it will be built in Indiana starting in calendar 2018.

The Ascent concept’s design is inoffensive and actually pretty fresh from all sides.  Key rivals for the Ascent will be the posh new Mazda CX-9 and VW Atlas, along with Explorers and Highlanders galore.  The 117-inch wheelbase on this Ascent proves scale will not be a problem – this is a big truck!

Subaru’s legion of devoted owners have been clamoring for this model as long as Fuji’s product planners.  May it arrive pronto looking just like this!

NEW YORK –  Subaru of America, Inc., which this month posted its 64th consecutive month of record-breaking sales, today made the world debut of the Subaru Ascent SUV Concept. The styling concept also confirms the name Ascent for the upcoming Subaru 3-row SUV. Both the design concept and the production Ascent will feature an all-new turbocharged direct injection boxer engine.

The exterior design of the concept follows Subaru’s “Dynamic x Solid” theme with powerful fender flares representing Subaru’s all-wheel drive system and a large, bluff grille denoting a true SUV look. The interior of the concept features a flowing dashboard design and a 7-passenger configuration with center captain’s chairs.
The Ascent production model will be based on a modified version of the Subaru Global Platform that debuted last year. The model will be built at Subaru of Indiana, Inc. in Lafayette, Indiana and will be sold exclusively in the North American market starting in 2018.