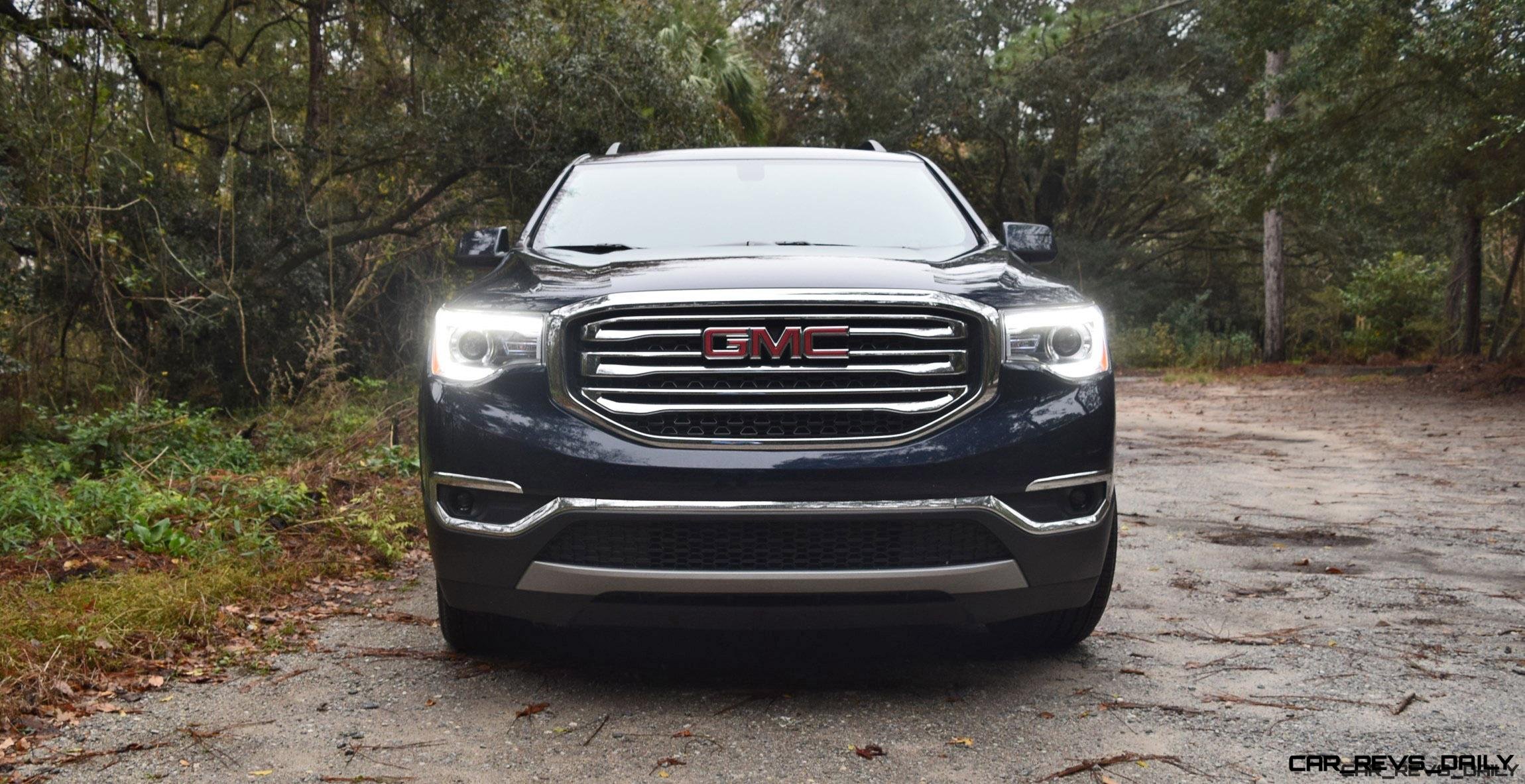 You know the shorthand details on the all-new 2017 Acadia from GMC:  it is 700-pounds lighter and overall far more carlike than its predecessor. While still seating six or seven with its three-row seating.

Another few changes slipped out of the big news, though: the Acadia is gorgeous now, and runs a gorgeous 26-mpg highway via its standard front-drive, four-cylinder power.

This is pretty huge news versus the Acadia’s at the top of the range with their big V6 engine and ubiquiotus AWD and huge wheels.  A rarity in the car-reviews business, then.

We have ourselves an entry-level model to test out!  The one that most people will end up buying, in other words.

A week in the new Acadia 2.5-liter SLT proves this new platform and design is at the top of the segment for driver ease, interior tech/comfort and value.

HD Drive video also includes a walk-around and cabin overview near the back half of the video.

It has been many years since the Acadia’s design really set your eyes alight.  Long a large, imposing block of metal — the Acadia in this generation loses all hints of mini-van.  A long, flat hood upfront is perhaps the single biggest change to the car’s proportions.  This replaces the short hood from before with a pretty elegant, cab-backward look. The new Acadia’s nose is also rather trucklike in its large, horizonal grille and pulled LED daytime running lights at the very edge of the hood.  Far less overhang than before, too.

The proportion changes around the side and three-quarter are just as radical.  A much lower roof and lower ride height in general are carlike touches that, somehow, blend nicely with the real-truck look of the nose.  In all, the new Acadia looks both more like a real truck and much more like a low-riding car — at the same time.

The big change in the rear of the Acadia is the new chrome window-outline.  This excludes the third-row windows, visually, and really works at turning a practical shape sexy.

No other SUV has this look yet — but the Acadia is likely to be the first of many to de-emphasize its third row of seats and mommy-ready capabilities.

Hey, even the most mom-tastic parent doesn’t always need to broadcast that fact.  If they were cool with that, they would be in a minivan, right?

The detail upgrades for the Acadia design are just as fresh as the wholesale re-do of its proportions and packaging.

In front, the new LEDs are certainly a highlight.  They actually look just as bright and crisp from 100 yards as they do from up close.  Enhancing and upgrading the style of the car 10X is easier-said-than-done.  But the Acadia really scores here, with fresher style than even the new Audi Q7.  A car whose LED design the previous Acadia borrowed from Audi years ago.  Cool to leapfrog a big, aspirational rival.

Also fantastic to have LEDs front and rear across the Acadia range, and not just for the top AllTerrain V6 AWDs.  Even so, the halogen low/high/fog beams are where costs come into play: our tester does not have these goodies.

The chrome levels on the Acadia are slightly muter versus before, even while capping the grille and lower intakes up front.  On this SLT-1 FWD tester, we were pretty impressed to have dark graphite-painted alloys — an on-trend and cool touch.  Only gripe on the SLT-1 is that much of the lower bodywork is scratch-resistant plastic instead of painted to match the Dark Sapphire Blue of the upper bodywork.

Clean LED running lights in back are a chic touch, even with the single exhaust pipe and cheap-looking rear diffuser/bumper protector in silver.  Regular bulbs for the actual brake element of the lights is a nice price-compromise to keep LED style back there somehow.

Describing the Acadia SLT as a base model is hard to comprehend from the inside.  The car is seriously plush and seriously well-equipped — even without the Denali badges on the side.

In fact, the Acadia regularly drew nods of appreciation for its tech and luxury – without making you hunt/peck through the options list.  Examples?

Leather cabin, cooled seats, remote start, power seats and trizone AC are all standard, as is a big touchscreen audio system that is the same size as the $495 nav upgrade.  Apple carplay/Android auto, SXM, wifi… the list goes on and on!

We also like the backup camera, blindspot and rear sonar sensors as standard on the SLT1.

Perhaps better than the equipment roster is the new drive position.  Is it as low and cool as the Durango-like exterior shape of the Acadia?  Yes!!

Finally, a mid-size crossover from GMC whose steering wheel comes out far enough, and seats go low enough, to assume the sportiest drive spot.  Of course, you can sit up high very easily too — and enjoy a good view outside too thanks to thin pillars all around.

Worth mentioning: the great comfort and wide-console front seats.  Fairly classy leatherette wraps the dashboard versus real hide on the snappy new steering wheel.  New solumn stalks are better than before but never feel as high-quality as the best in the industry.  Slight dings in perceived quality are extra apparent because overall comfort, refinement are so, so good.

Where the new Acadia really works its magic is in the back seats.

The seating position and second row seats are deeply comfy.  They are wide captains chairs that recline like a dream and make the most of the ultra-low and flat floor.  So you sit with your knees bent fully and feet down versus out.  It feels huge but also safe and ensconced in the second row.  A bit more so in the third row, accessed through the slide/tilt of the captains chairs or through the usable-for-adults middle walkway.  Same miracle back here:  a flat floor with actual foot room!  Seating for just two in the third row– making this a six-seater — is also one of the best we’ve tried.  Huge armrests.. decent knee-room and even recline-able back there, too.

Extremely impressive space?  Yes!  So much so that the whole chassis/platform redesign starts to make damn good sense.

This Acadia 2.5-liter four has some quirks, however, versus the V6 models.  First off, the automatic stop/start system comes on every time you drive and there is no button to disable it.  So you soon adapt, and respect how fast it fires back up when you move your foot on the brake a bit, or turn the wheel.  You cannot catch the system out: give it gas right from a stoplight and you are rolling instantly.  The benefits of super-silence at red lights also starts to appeal.

Even so, some folks would strongly prefer at least the ability to disable the gas-saving system.

Similar for the Acadia’s drive mode selector, which did not appear to work on our test truck.

But how is it, overall?  Very nice.  Lightweight helm and lightness from the nose of this front-driver at all times.  The Acadia drives smaller than it looks, with nimble moves around corners.  Solid traight-line stability and calm cruising are nice elements to report.  The six-speed auto is well-tuned to max out the 194 ponies available under the hood.

Pace is decent with just a few people inside, but will suffer in the mountains or when hauling.  For our tastes, the V6 would be a no-brainer upgrade for less than $2k extra.  But then again, this entry model drives as friendly and speedy-feeling as a Highlander V6 anyway.  21-city 26-highway are good scores for any three-row crossover, even if not quite eyepopping on paper.

That trailer hitch is terrific value, too, for a full factory installation that can cost thousands on other SUVs.

The Acadia with its entry engine is fantastic value and space for pricing under $40k.  It looks cool and trendy from the outside and is huge, wide and modern inside.

We especially love the Acadia for how well it balances all the factors in a family crossover.  The vehicle you didn’t know you needed?  Yes.  Especially when you see its huge seats and modest sticker price.