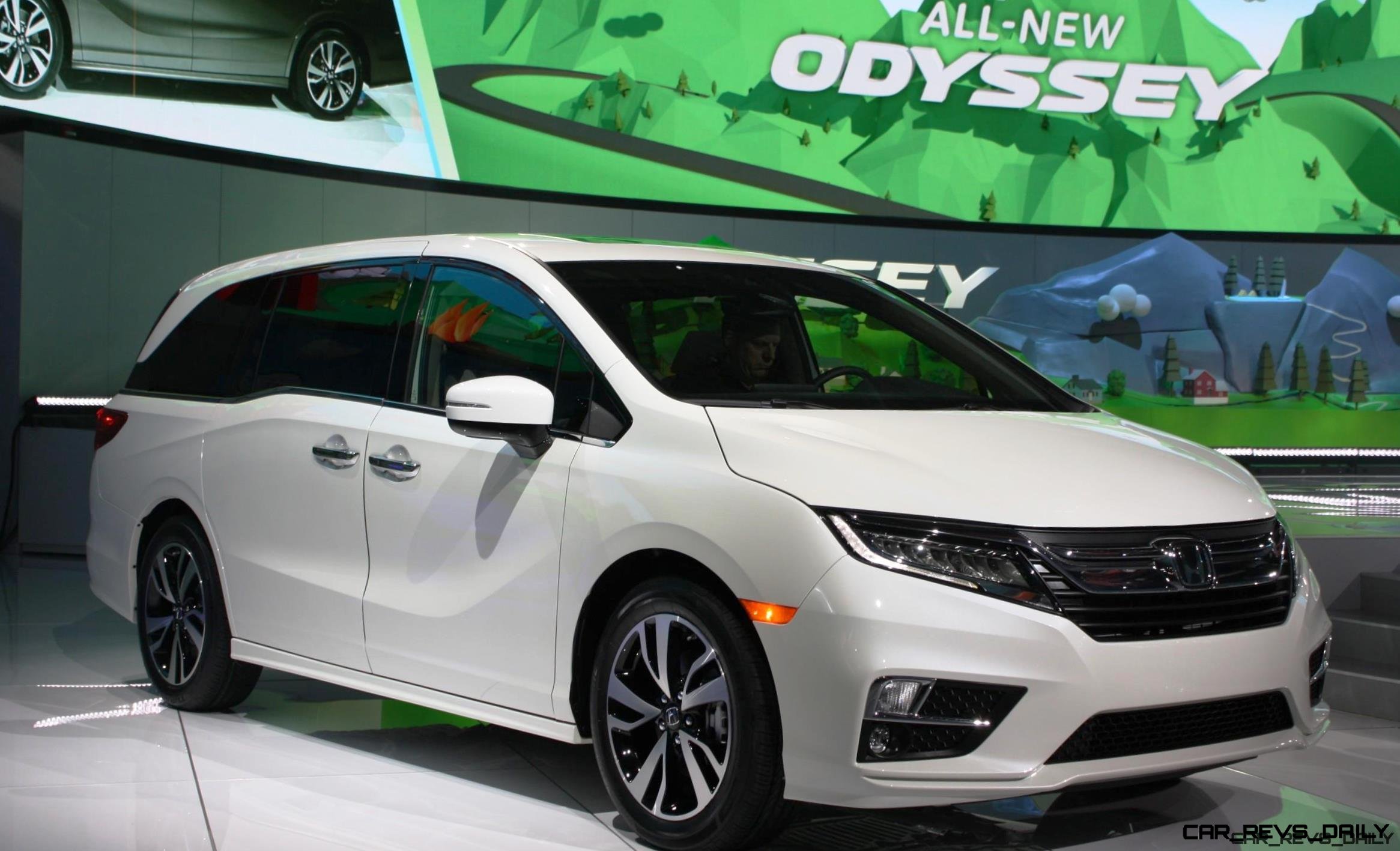 Honda has formally taken the wraps off of the 2018 Honda Odyssey at the 2017 North American International Auto Show in a bold effort to not only steal sales from the recently unveiled and highly popular Chrysler Pacifica minivan, but also allow it to stand out against the Nissan Quest and the Toyota Sienna.

The exterior styling of the 2018 Odyssey is a tasteful evolution of the traits that made the previous generation Odyssey a hit with buyers. The bland front fascia that defined the old model has been pitched, and the 2018 version puts a renewed effort on embracing the sportier cues that has defined other Honda models. There is a strong resemblance to the current generation Civic in the front fascia especially with its flying wing style front grille and the bold LED headlights that accent it. Honda designers also thoughtfully retained the trademark “lightning bolt belt line” and actually used it to hide the sliding door tracks that are housed in the lower half of the rear windows. The rear fascia features LED tail lights, and the Odyssey catches up to rivals, and adds a hands free liftgate with foot activated sensor to its list of tricks for the new model year.

The interior of the 2018 Odyssey was also overhauled, and incorporates a number of new features to make it more distinct in the minivan segment. A key feature is the all new Magic Slide seat that allows buyers to add even more flexibility to passenger hauling duties. This is thanks to seats that not only move forward and back, but also sideways which helps add a new dimension to the Odyssey’s seating layout. This higher degree of movement allows occupants easier access to the third row, and also helps make exiting easier for taller passengers. As a bonus, the seats feature a “Separation Mode” that aims to eliminate sibling squabbles by removing the center seat, and also sliding the two outer seats to the furthest position which creates a central walkway in the process.

In addition to the revamped rear passenger space, front occupants also benefit from a revamped instrument cluster that features a 7-inch full-color TFT display, while the center dash can be equipped with an optional 8-inch high resolution touchscreen infotainment system. Higher grade Odysseys feature first and second row leather seats as well as black seat belts and carpet which were all designed to conceal stains (a common companion for young children) while a grooveless tambour lid on the center console was designed to mitigate crumb and debris build up.

The 2018 Honda Odyssey also reflects Honda’s new vision for products that offer new levels of “family connectivity.” In the case of the Odyssey this means having the quietest cabin in the minivan segment while also boasting several new technologies that further enhance this effect. Two key ones are CabinWatch and CabinTalk that allow parents to keep tabs on second and third row passengers via the 8-inch infotainment screen, as well as speak to them through either the sound system or the wireless headphones. Meanwhile, CabinControl works in conjunction with a downloadable app and allows users to control the rear entertainment and climate control systems as well as transmit navigation data to the Odyssey’s navigation system.

Performance for the 2018 Odyssey comes from the familiar 3.5 liter direct injected V6 engine that also sees duty in the Honda Pilot and the Honda Ridgeline. Good for 280 horsepower, this engine allows the van to make 32 more horsepower than before, and should help the Odyssey retain the smooth yet confident performance that many buyers expect. However, the game changer here is the transmission choices with the 2018 model taking clear aim at the Chrysler Pacifica. Base Odyssey models will feature a 9-speed automatic transmission with higher trims upping the ante with a 10-speed auto. The latter offering is the first time that a 10-speed automatic has been offered in a minivan, and it also makes the 2018 Odyssey the fourth consumer vehicle offering in the marketplace with a 10-speed automatic (the others being the Lexus LC500 luxury coupe, the recently unveiled 2018 LS500, and the 2018 Ford F-150.)

In addition to its performance hardware, Honda engineers also made significant revisions to its platform and body construction with the end result being an Odyssey that is lighter and more rigid than its predecessor, which should help the van boast better handling characteristics as well as higher fuel economy figures. A potent example of this diet is the 96 lbs of excess flab that engineers cleaved off of its flanks with the help of lightweight materials such as aluminum, magnesium, and ultra high strength steel. Handling is also improved thanks to Dual Pinion Electric Power Steering, and while the Odyssey will never be mistaken for a sports car, its new moves could allow it to outshine the Pacifica as well as the Nissan Quest and the Toyota Sienna.

Honda did not release pricing information or a formal launch schedule for the 2018 Odyssey, but look for more information to be revealed closer to its official launch to dealerships.