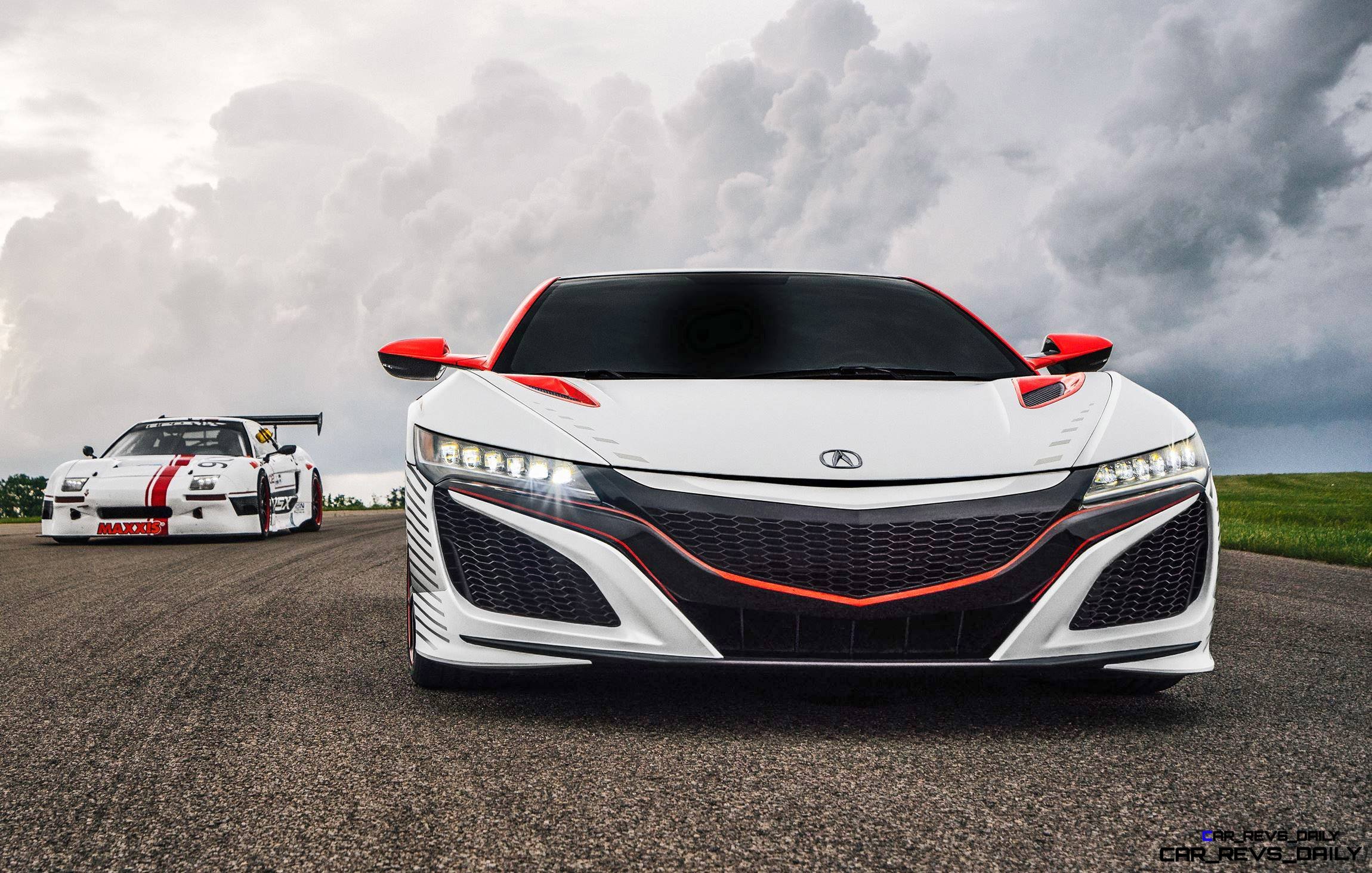 Honda and Acura have continued their title sponsorship of the Pikes Peak Hillclimb in 2015 with a variety of cool tech innovations on and off the 14,000-foot mountain of a racetrack.

Climbing 1000 feet a minute while hitting 180-degree corners every few hundred yards is no small achievement for any car — and Pikes Peak in recent years has become true global racing highlight for many brands. Knocking seconds off the climb times is increasingly challenging and requires ultra-high-performance machinery to achieve.

Peugeot nailed a track record last year, and Honda was aiming for quickest-ever glory in 2015 with its LMP2 car. Latest rumors suggest the June 28 race will not include the Honda ARX-04b LMP2 racecar as planned after some mechanical issues in testing this week.

A darn shame, especially with the Honda and Acura track investment.

Two dozen new track cameras will record more action than ever before, while car-mounted video and stills also promise more of the sensory mountain thrills to a global audience. New safety fencing was bankrolled by Honda for 2015 as part of the race sponsorship, but still leaves unspoiled views for 1000-miles from all sides of the summit. .

Honda’s dozen entries for 2015 include a 100-percent EV CR-Z with SH-AWD and the new NSX as an official pace car. So no LMP2 record attempt, but still a Honda-palooza outside Colorado Springs this weekend.

Watch this space for the multimedia immersion in video and photos after the Sunday race.

The next-generation Acura NSX supercar will serve as the official pace car in the 93rd running of the Broadmoor Pikes Peak International Hill Climb on June 28. With a custom racing-inspired livery, the twin-turbo charged NSX pace car will lead the field of 140 entrants to the top of the 14,110-foot Colorado mountain.

“The Acura NSX is the ultimate performance vehicle and a novel way to promote its capabilities is the iconic race up Pikes Peak,” said Mike Accavitti, senior vice president and general manager of the Acura Division. “As the pace car, the beast that is NSX will not be fully let of its cage, but fans and drivers will still get a first glimpse of the unique character, performance and handling of the NSX in a one-of-a-kind racing environment.”

Powering the NSX through the 12.4-mile, 156-turn course is a bespoke 75-degree twin-turbo V6 engine mated to a 9-speed dual clutch transmission and three motor Sport Hybrid Super Handling All-Wheel Drive (SH-AWD) system, which delivers ‘on the rails’ cornering capability essential to conquering the demanding mountain course. The pace car was specially prepared for the race by Honda R&D Americas, Inc., which is also leading the global development of the NSX. The supercar will be driven by Sage Marie, senior manager of American Honda Public Relations, a two-time Pikes Peak competitor and road racer. Marie won the first Pirelli World Challenge B-Spec race in 2012 and has raced in several other major motorsports events, including the 2013 and 2014 Pikes Peak International Hill Climb.

In a Pikes Peak first, Acura will install 24 cameras along the course to capture the NSX’s historic run as the official pace car with a 360-degree series of images of supercar. Fans can head to Acura’s social media channels – Instagram, Twitter, Facebook, Google+ and YouTube – where the images will be transformed into to an exclusive video, after the NSX heads to the top of the mountain at 7:40 a.m. MDT. Additionally, the run will be covered live on Acura social media channels.

For those able to attend Pikes Peak in person, the NSX will be available for viewing at a number of pre-race activities including the event’s media day and VIP reception in Colorado Springs on Thursday, June 25, and at the popular Fan Fest in downtown Colorado Springs, 5–10 p.m. MDT on Friday, June 26.

The NSX is one of four Acura models making the Pikes Peak run, which also includes the Acura ILX and TLX sports sedans and a previous generation NSX.

For More Information
Consumer information is available at www.acura.com. To join the Acura community on Facebook, visit facebook.com/Acura. Additional media information including pricing, features and high-resolution photography is available at acuranews.com/channels/acura-automobiles.

In their most ambitious assault ever on the Pikes Peak International Hill Climb, Honda Performance Development and Honda Research and Development associates are fielding 13 vehicles in 11 different classes for the June 28 race up the 14,110-foot Colorado mountain.

The list of vehicles scheduled to compete in the 93rd running of the event ranges from exotic to practical and features something for fans of all types of racing.

Japanese Super GT stalwart Tetsuya Yamano will pilot an all-electric vehicle that features the Super Handling All-Wheel-Drive technology found in Acura products, mated with a sleek Honda CR-Z chassis.  Acura TLX, ILX and a highly modified, first-generation NSX will compete, as will a Honda Fit EV and the Honda Fit B-spec machine that has been a consistent frontrunner in Rally America events during the last two years. The B-spec Fit will be in the hands of former Indy Lights champion and Indy 500 top-five finisher Alex Lloyd for the event.

“Honda has a unique opportunity to showcase its diversity of product by racing at the Pikes Peak International Hill Climb,’ said James Robinson, principal engineer for Honda R&D Americas. “No other mobility company on the planet can come to Pikes Peak and compete in almost every race category, while simultaneously supporting all the crews and sanctioning body through the usage of our Side by Sides and our generators. Truly, the Pikes Peak International Hill Climb is best race in the world to deliver that message.”

Honda-powered vehicles have taken at least one class victory at the legendary event in each of the last 13 years, and have captured 48 wins in all, including the overall championship last year, as Romain Dumas used a Honda engine in his Norma sports prototype chassis to beat everyone competing on the 12.42-mile, 156-turn course.

In addition to the entered automobiles, Honda associates will be running in the ATV and UTV classes, as well as in four different motorcycle classes. Riders will compete on the CRF250R as well as CBR 300, 600 and 1000 models.

Extending its event support beyond the race track, American Honda Motor Co., Inc., will serve as a corporate sponsor of the Hill Climb for the third consecutive year. In addition, Honda Powersports will continue as the official ATV/UTV of the race, showcasing its latest products in support of the event.

About Honda
Honda established operations in America in 1959 and now employs more than 39,000 associates in its North American sales, R&D and manufacturing operations, with total capital investment in North America exceeding $22 billion.

Eight Honda auto plants in the region, including four in the U.S., have the capacity to produce 1.92 million automobiles each year. In 2014, more than 97 percent of the Honda and Acura automobiles sold in the U.S. were produced in North America. Those plants today manufacture 11 different models, including four passenger cars and seven light trucks, using domestic and globally sourced parts. A fifth U.S. auto plant, the Performance Manufacturing Center, is under construction in Marysville, Ohio, and in 2015 will become the exclusive global production location for the next generation NSX supercar.

Honda also operates 16 major research and development centers in the U.S. with the capacity to fully design, develop and engineer many of the products Honda produces in North America.

About Honda Performance Development
HPD was founded in 1993 to spearhead Honda’s entry into Indy car racing. No other manufacturer has matched Honda’s success in Indy cars, which includes 213 race victories, 15 drivers’ championships, six manufacturers’ championships and 10 Indianapolis 500 victories, including the 2014 event, won by Ryan Hunter-Reay of Andretti Autosport.

About Team Honda Research
Founded in 1996 and based in Ohio and Los Angeles, THR has a record of success racing Honda and Acura products in Sports Car Club of America (SCCA), NASA, and Rally America competition, with more than 50 race victories in a variety of classes.