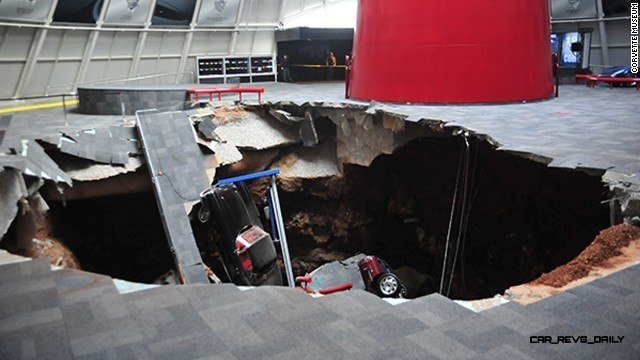 As if the world were not scary enough — It seems even our cherished Corvette Museum in Bowling Green, Kentucky is facing a huge disaster today. A sinkhole in the grand pavilion appears to have swallowed a number of Corvettes whole. I guess we know what the Devil’s sports car choice is? Our thoughts are with the Corvette Museum team. We will rebuild. Stronger, better, faster – like all next-gen Corvettes. The Zora spirit still shines brightly on Bowling Green. Image: CNN Official details from the Corvette Museum below. Sinkhole Collapses at National Corvette Museum We received a call at …

Mustang mania is building up! The reveal promises to be one of the most exciting from Ford in years, and the anticipation is palpable! One last hurrah for this generation of Mustangs comes in the 2014 Official Pace Car, which led the NASCAR Miami Homestead race earlier in the month before jetting west for SEMA and the LA Show. Quite a stunner, with huge fender flares that are far better integrated than most Mustang wide-body chops.