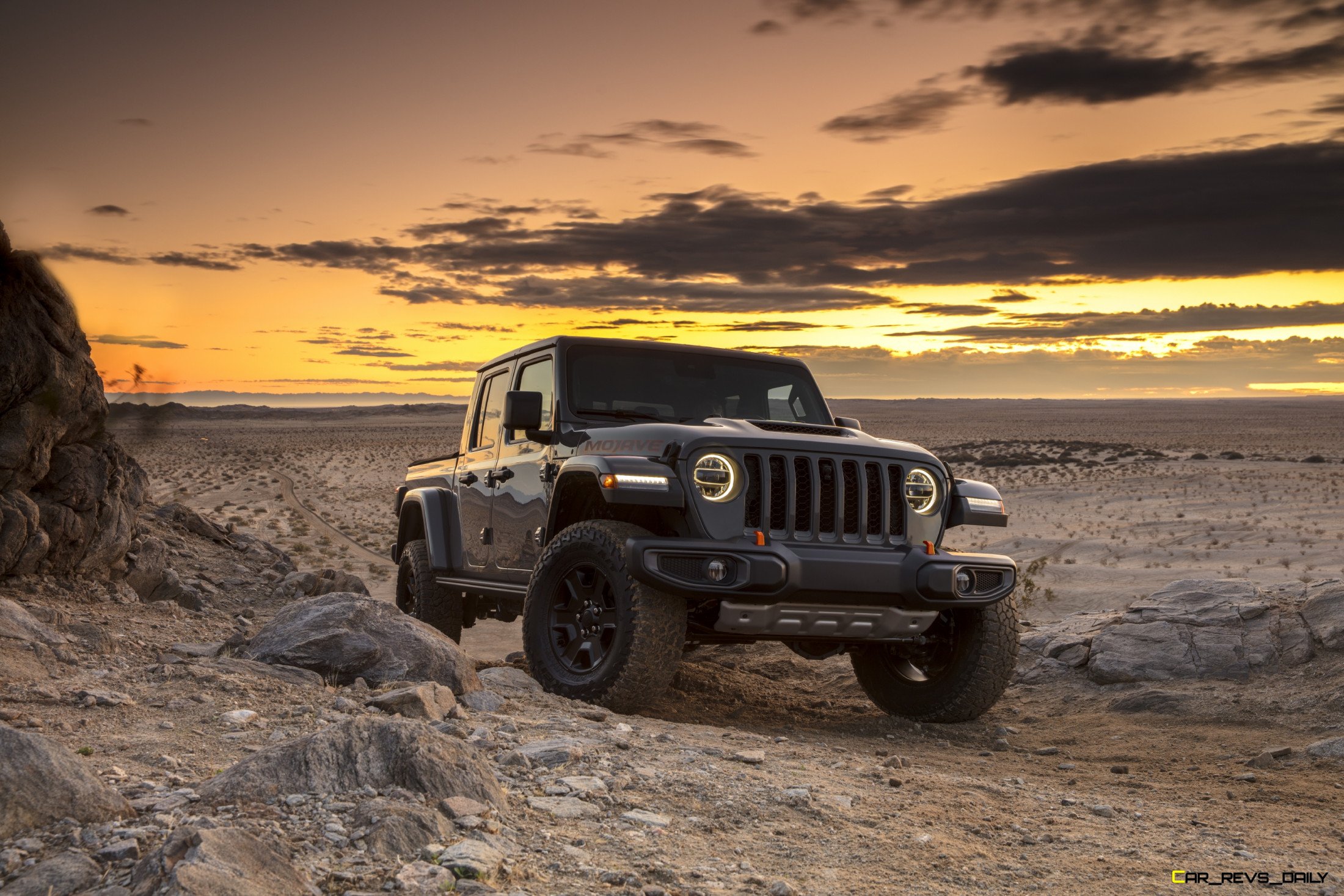 Jeep aimed to make a splash at the 2020 Chicago Auto Show, and brought a trio of debuts to wow the crowds in the Windy City with their blend of style and rugged functionality.

Before we get into the custom side of things, we might as well get into the show stealer of Jeep’s conference, the Gladiator Mojave edition. The Mojave is Jeep’s answer to requests from loyalists that needed a more capable tool in desert driving situations, and comes equipped with a number of modifications that help it be better suited for this role. The exterior styling of the Mojave retains its core styling roots, but Jeep engineers have given the Mojave an all new steel hood that features a hood scoop, and a good helping of orange accents including the badging, front and rear hooks, select interior items, as well as the all new Desert Rated badge. This badge is a clever play on the traditional Trail Rated badge, and indicates that the Mojave has lived up to the unique parameters that are often associated with desert driving.

The bulk of the performance upgrades are found in the Mojave’s platform, with Jeep engineers adding a suite of improvements to help make the Gladiator ready for punishing desert driving conditions. These include 2.5 inch Fox internal bypass shocks with external reservoirs and an extra inch of ride height for an improved 11.6 inches of total ground clearance. Fox also supplied front hydraulic jounce bumpers tat also function as secondary shocks for extra damping properties when the springs are fully compressed. The track is a half inch wider for better stability, and the frame and axles all get beefed up components to help the truck endure the punishment often associated with desert driving especially the enhanced wear and tear generated by coarse sand and heat. All Mojave’s come equipped with Jeep’s familiar 3.6 liter Pentastar V6 that makes 285 horsepower and 260 lb-ft of torque. A six speed manual is standard, but buyers that prefer to shift the gears themselves can equip the rig with an optional eight speed automatic. Four wheel drive is bundled in as standard, and is enhanced with a two speed transfer case and a locking rear differential. The truck rides on standard 17-inch wheels with 33-inch Falken Wildpeak all-terrain tires as standard. However, this rubber can be swapped out for Falken’s Mud Terrain tires which offer better amounts of grip especially in muddier sections of the desert.

The interior is also ready for desert duty, and has been equipped with materials that can withstand the harsh sunlight and heat. Buyers can choose from a black or steel gray interior with the front seats featuring larger bolsters, and orange accent stitching is used throughout the cabin. Jeep adds an Off-Road Plus mode to the Mojave that tweaks the throttle response, shift points, and traction control for driving high speeds through the sand or slowly crawling over rock obstacles. The system even allows buyers to lock the rear differential at high speeds in 4-Hi which is the first time such a capability has ever been available on the Gladiator.

But while the Mojave is arguably the most functionally capable one of the bunch, Jeep also wanted to try and reach out to buyers that like to have a custom identity to their Wrangler or Gladiator purchase, and has extended its High Altitude designation to both of these models. Like other High Altitude Jeeps, styling is the dominant force here, with Jeep designers giving both the Gladiator and the Wrangler body color accents including the front and rear bumpers, mirror caps, and even the removable tops. LED headlights and fog lights are part of the package, and for the first time ever on both of them a set of 20-inch high gloss black wheels are equipped to help unify the new look while also adding a dash of sport to them at the same time. Running boards help make access to the cabin a bit easier which should please shorter occupants.

Meanwhile, the interior of these two benefits from an extra dose of luxury with leather upholstery covering the seats, doors, dashboard, and center console. The seats get buttery soft Nappa leather while the Uconnect 8.4 inch touchscreen infotainment system is standard equipment. A drivers assistance suite is also on board and it pairs blind spot monitoring and rear cross traffic alert together to help keep occupants protected from a wide range of angles.