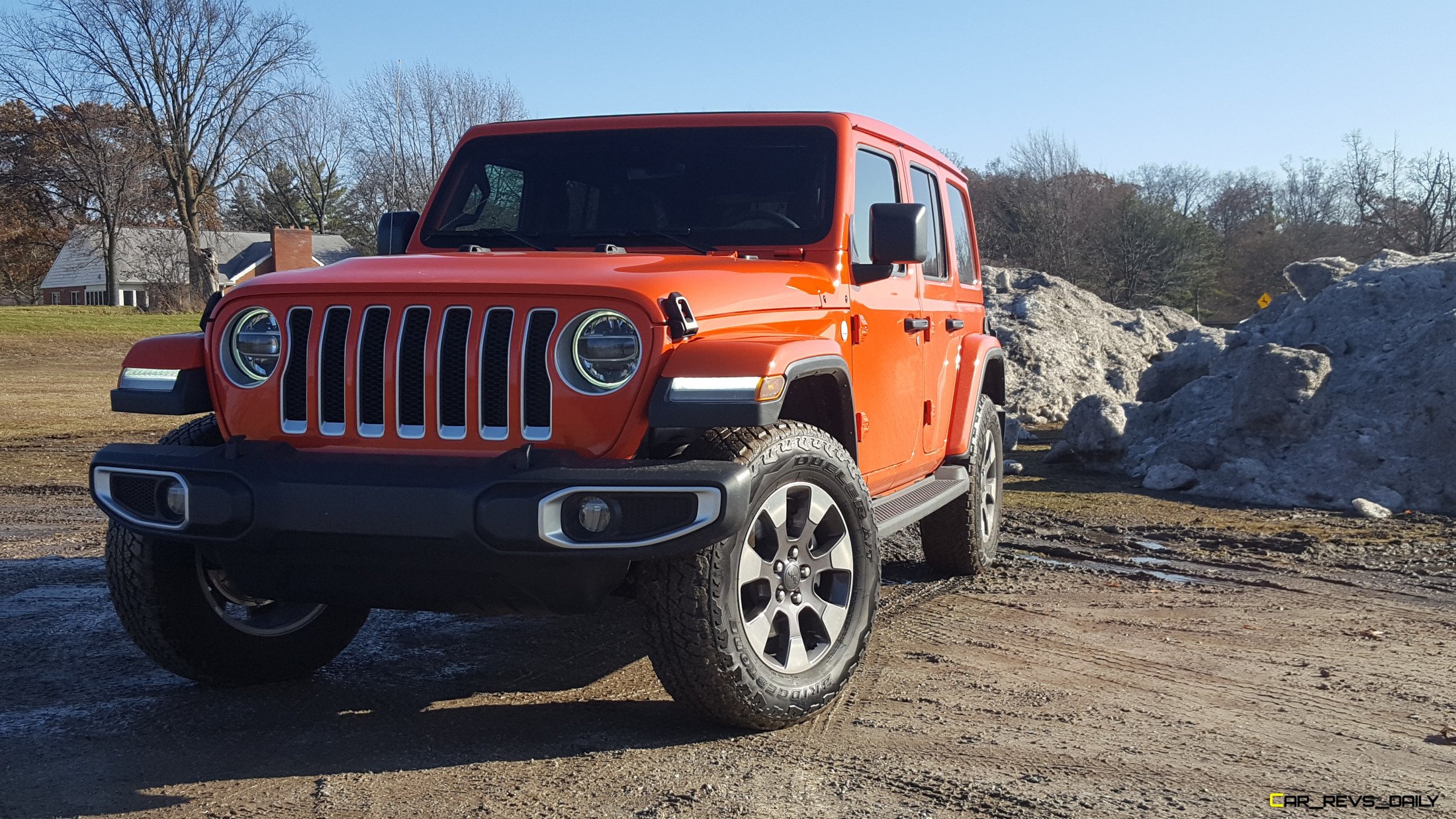 When it comes to bearing the weight of the world on ones shoulders, few can match the burden carried by the legendary Jeep Wrangler. Sharing roots with the Willys Jeep that played a key role in turning the tide for the Allied Forces during World War II, the Wrangler has made a name for itself for offering buyers amazing off-road capability in a package that has still retained much of its core values over the years, while also resisting the urge to outright abandon its functional design cues. But with a new decade now upon us, the iconic Wrangler has a new host of rivals to compete against in the quest for off-road SUV sales supremacy. Can it still be the benchmark SUV that others strive to top? Or is it time for the Wrangler to pass the torch? We were eager to find out.

The Wrangler has undergone some changes over the past few years, with Jeep revising the trim ladder, adding an optional diesel engine, and even revised gasoline engines with optional mild hybrid capability. In our case, we were paired up with a Sahara Unlimited model slathered in bold “Punk’n Metallic” orange paint. The Wrangler benefitted from a styling refresh back in 2018, and as a result, the bulk of the basic motif carries over unchanged. This includes the trademark seven slat front grille, bold headlights, as well as the traditional and much expected front hood with exterior hold down clasps. The Unlimited version features a bigger side profile, but this added size looks natural (versus being a tacked on afterthought) and leads out to the rear fascia which is pure Jeep right down to the spare tire mounted on the rear tailgate. We also like the new square shaped LED taillights, and how they help add a distinctive punch to the Jeep’s nighttime profile. This obsession with the past allows the Wrangler to be just as distinct of an offering as some of its more modern looking counterparts including the Toyota 4Runner, though when the Ford Bronco eventually appears, it could give the Jeep a worthy challenge in the art of drawing the most stares.

The interior of the 2020 Wrangler may not be quite as spacious or as luxurious as other SUVs, but Jeep designers certainly went above and beyond to try and bring in splashes of refinement and modern materials into the Wrangler’s cabin. Our tester featured soft leather accents for the steering wheel, doors, and other components, as well as buttons and switches that felt high quality. The view up front is wide, with a strong commanding view of obstacles ahead, but the view of the rear is blocked by thick pillars, roll bars, and various grab handles. The remedy of course is to remove the roof and pop off the doors, but winter weather prevented us from undertaking this task. Instead, we chose to indulge in the optional Sky One-Touch power top that came equipped with our tester. This $3,995 extra transforms the top into a massive retractable sunroof that can be opened or closed with just one touch of a button. The amount of sky that reveals itself to occupants is impressive, and the unit itself is very quiet in operation. The lone catch is that while the novel sunroof can still be removed with the rest of the roof like all of the other top configurations for the Wrangler, there are a few extra steps that need to be completed in order to remove it correctly.

The rest of the cabin features a very functional themed layout, with the driver and front passenger facing a very narrow upright dashboard that features round air vents chunky controls for various functions (including the power windows, as well as the optional uConnect 8.4 infotainment system which features a crisp and vibrant 8.4 inch touchscreen. When it comes to hauling cargo or running errands, the Wrangler is a commendable steed. The rear seats don’t fold flush with the floor however, and as a result, there is a noticeable hump that does make itself felt when loading bulkier items. Headroom for rear passengers is a bit tight due to the Sky roof, but the Unlimited makes up for it by offering passengers good amounts of rear leg room to stretch out in when going on long jaunts. Sahara models bring heated leather seats and other minor luxury touches to the party, but at the end of the day, it is still a Wrangler, which means plenty of tire and wind noise that enters the cabin at freeway speeds.

Jeep is making major updates to the Wrangler’s performance hardware for 2020, with several new engines making there way under the hood. While the Wrangler can be equipped with either a 2.0 liter 270 horsepower four cylinder, or the recently launched diesel that makes 260 horsepower and an impressive 442 lb-ft of torque. Our tester arrived with the aging Pentastar V6 that was carried over from the previous generation Wrangler. Good for 285 horsepower (the most of the trio) this V6 did a good job delivering reasonable amounts of performance. Like other iterations of this engine, the Pentastar is happiest in the higher reaches of the rev band, versus being in the low end of the spectrum, which does force the driver to wind it up a bit to get the most out of it. This is especially true in freeway driving to help the Wrangler make lane change maneuvers with reasonable confidence.

The V6 can be paired with either a standard six speed manual gearbox, or an eight speed automatic which was what our tester arrived with. The eight speed did a good job delivering smooth shifts, and it also allowed our tester to make the sprint to 60 mph in 6.8 seconds. Equipping the V6 with the six speed manual (which allows the driver to have better control of the rev band) does make things slightly quicker, with the Jeep doing the same deed in a brisker 6.1 seconds. The JL Wrangler is a decidedly improved iteration of the breed when compared with older Wranglers, but even the fresh bones in its underpinnings cannot hide the fact that it is still has front and rear solid axles. While this helped our tester stand out in the off-road driving we threw at it, it also translates into rather clumsy handling out on the pavement. This manifested itself in copious amounts of body roll, and vague steering that could do a better job of communicating to the driver. Braking also left a lot to be desired, with the soft brake pedal not generating much feedback during hard stops. While this is roughly on par with some of the 4-Runners we have tested, the upcoming Ford Bronco could give the Jeep a run for its money in some of these metrics, especially if rumors about it having a fully independent suspension do bear fruit.

Pricing for the 2020 Jeep Wrangler is just as diverse as some of the special edition models that dot the model lineup, with the base Sport model starting at $31,795. The Willys Sport wields a slightly higher $33,493 and brings several exterior adornments and minor equipment differences to help add some sizzle to the barebones Sport model. Sahara models like our tester occupy the middle of the ladder, and are the most luxury centric of the Wrangler family. That also translates into a higher $38,645 base MSRP, with our tester having an eye watering final sticker of $55,785. This was due to the long laundry list of options that our tester arrived with. Highlights include the $2,000 eight speed automatic, the $3,995 Sky One-Touch sliding roof, and the $1,000 needed to upgrade to the V6.

This myriad of customization is a Wrangler trademark, but it can also cause the price to rapidly ascend past $50,000 if one fully options out a Wrangler. This is mitigated to a degree by careful selection of options and model choice, with this procedure helping to mitigate some of the sticker shock. The Wrangler has been a very formidable benchmark during the bulk of its production run, and as a result, it boasts a limited range of rivals. In addition to the Toyota 4-runner, the Wrangler also faces a challenge from the Chevrolet Colorado ZR2 which trumps the Wrangler’s old school suspension tech with its novel DSSV suspension system, and also boasts a Bison model to truly bring the fight to Rubicon models. Finally, the revival of the Ford Bronco will for the first time bring serious competition to the Wrangler, and it will be interesting to see how this rivalry shapes up once the Bronco makes its way to production.

With a myriad of customization, capability, and heritage the 2020 Wrangler is still a benchmark entry in the off-road segment. While its aging suspension technology does give it obvious handicaps in on-road driving, it is still one of the best choices that buyers can rely on when out on the trail, and with the off-road segment kicking into a higher gear with the impending arrival of the Bronco, it will be very interesting to see if the Jeep can still hang on to its throne in the near future.