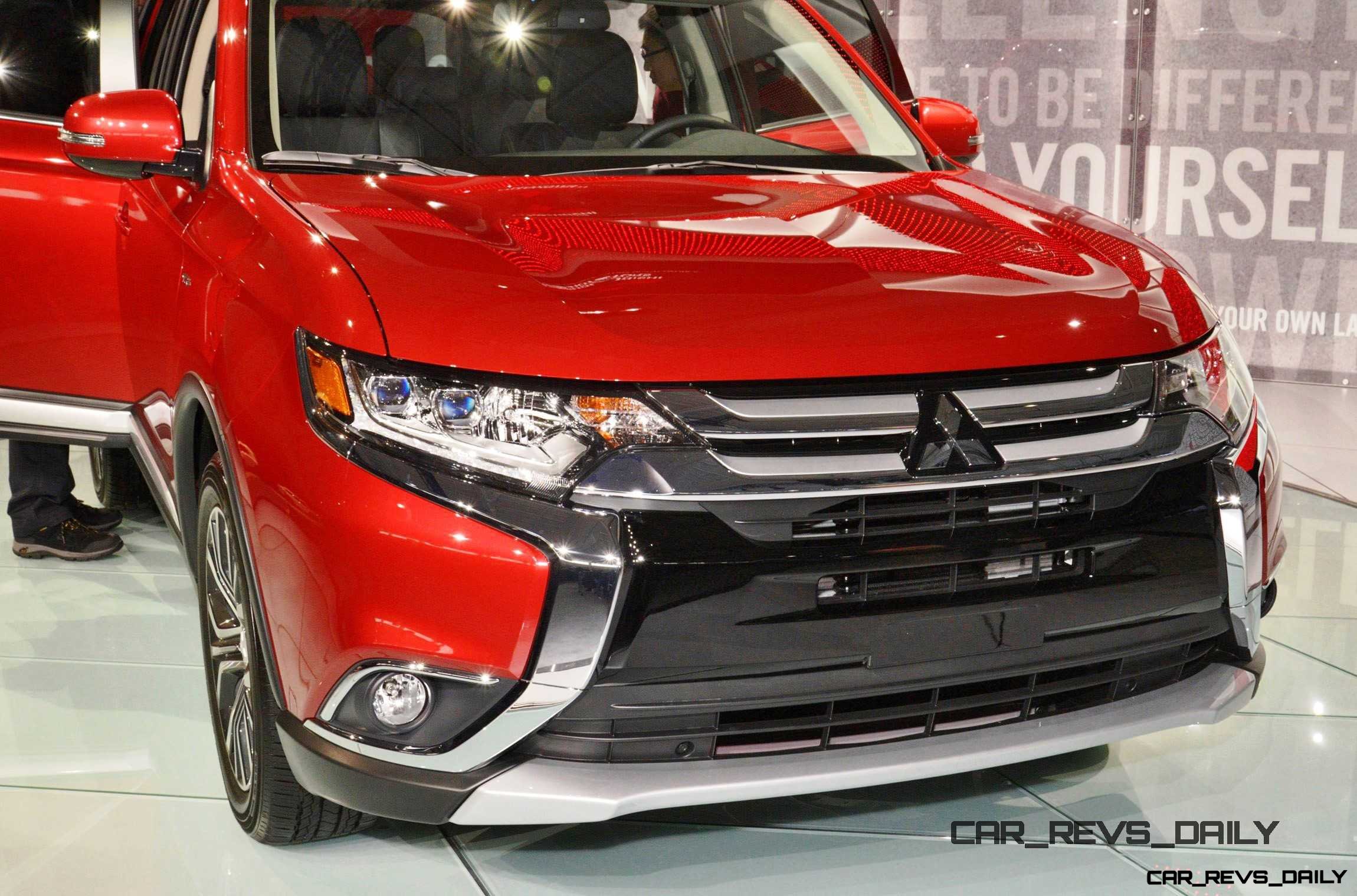 Mitsubishi is adamant that this 2016 Outlander revamp is deeper than a simple facelift. They have a point: the new Outlander is virtually unrecognizable as the current model!

There is a really chic and butch feel to the new nose, with its wide swath of chrome flowing down around the new LED DRLs and LED lowbeams. This chrome frames a gloss-black central grille and intake area in a fresh, unique and semi-premium way. Mitsu calls this the Dynamic Shield look for the nose, and it is likely to feature on future crossovers and SUVs from the fast-growing brand.

The Outlander is still one of the most affordable entries to the seven-seat crossover club. Larger than the RAV4 and Nissan Rogue, but much nimbler than cars like the Honda Pilot — the Outlander is worth a drive for folks looking for a high-quality and high-style crossover.

Pricing should be similar to the current model with the base four-cylinder ES and SE trims starting from just above $24,000, and the GT V6 starting from about $28,000. The very-desirable Touring pack adds a few G’s to the price, but adds the all the latest new tech features and the LED low-beams that are not present on the base trims. All 2016 Outlanders do feature new 18-inch wheels and the cool LED brake lights. CYPRESS, Calif. April 2, 2015 – Mitsubishi Motors North America, Inc. (MMNA) today unveiled the new 2016 Mitsubishi Outlander seven-passenger crossover at the 2015 New York International Auto Show. The 2016 Outlander is the first Mitsubishi production vehicle to showcase the brand’s new design language.  The 2016 Outlander is not just a cosmetic “refreshing,” however, and features an unprecedented number of important engineering and design improvements that increase the level of refinement and overall driving experience. The 2016 Outlander is a segment-leading vehicle that will appeal to buyers wanting value, quality and safety.

“The 2016 Outlander has an eye-catching new design aesthetic inside and out, and with its long list of engineering upgrades, the new Outlander literally looks, drives and feels like an entirely new vehicle, making it an even  more compelling value than before,” said MMNA Executive Vice President, Don Swearingen. “Mitsubishi’s outstanding sales momentum is carrying into the new-year and with the arrival of the 2016 Outlander crossover we are well positioned to sustain our growth.”

The 2016 Outlander features Mitsubishi’s new front design concept, “Dynamic Shield.” This feature is inherited from the bumper side protection seen on generations of the Montero, providing unique protection for both the people and car.

Mitsubishi Motors finished 2014 with vehicle sales up 24.8 percent over 2013 – among the highest sales growth in the U.S. auto industry. That sales momentum is carrying over through the first quarter of 2015, with continued year-over-year sales growth.

A REDESIGNED AND REENGINEERED CROSSOVER VALUE

Much more than a traditional mid-cycle design “refreshing” that consists of minor aesthetic updates, the new 2016 Mitsubishi Outlander has been redesigned and reengineered to stand out in the competitive small crossover segment with its powerful and dynamic appearance and refined driving experience. Combined with Mitsubishi’s reliability and safety standards, the 2016 Outlander is an unmatched value.

The new 2016 Mitsubishi Outlander features a bold new exterior design, an eloquent yet functional interior space, and over 100 engineering and design improvements to the platform for better structural rigidity, ride quality and reduced noise, vibration and harshness (NVH).

The 2016 Mitsubishi Outlander comes equipped with the following standard features:

The 2016 Outlander features Mitsubishi’s new front design concept, “Dynamic Shield.” This feature is inherited from the bumper side protection seen on generations of the Montero, providing unique protection for both the people and car.

The 2016 receives a fresh design update to the interior incorporating soft touch features that also includes a redesigned steering wheel, a new Mitsubishi Multi Communication System(MMCS) navigation and display audio system and accent trim for the doors and dashboard, along with improved seating surfaces and headliner (all models) and an auto-dimming rearview mirror with Homelink® (GT model). Additional improvements include a newly redesigned folding rear seat for easier operation.