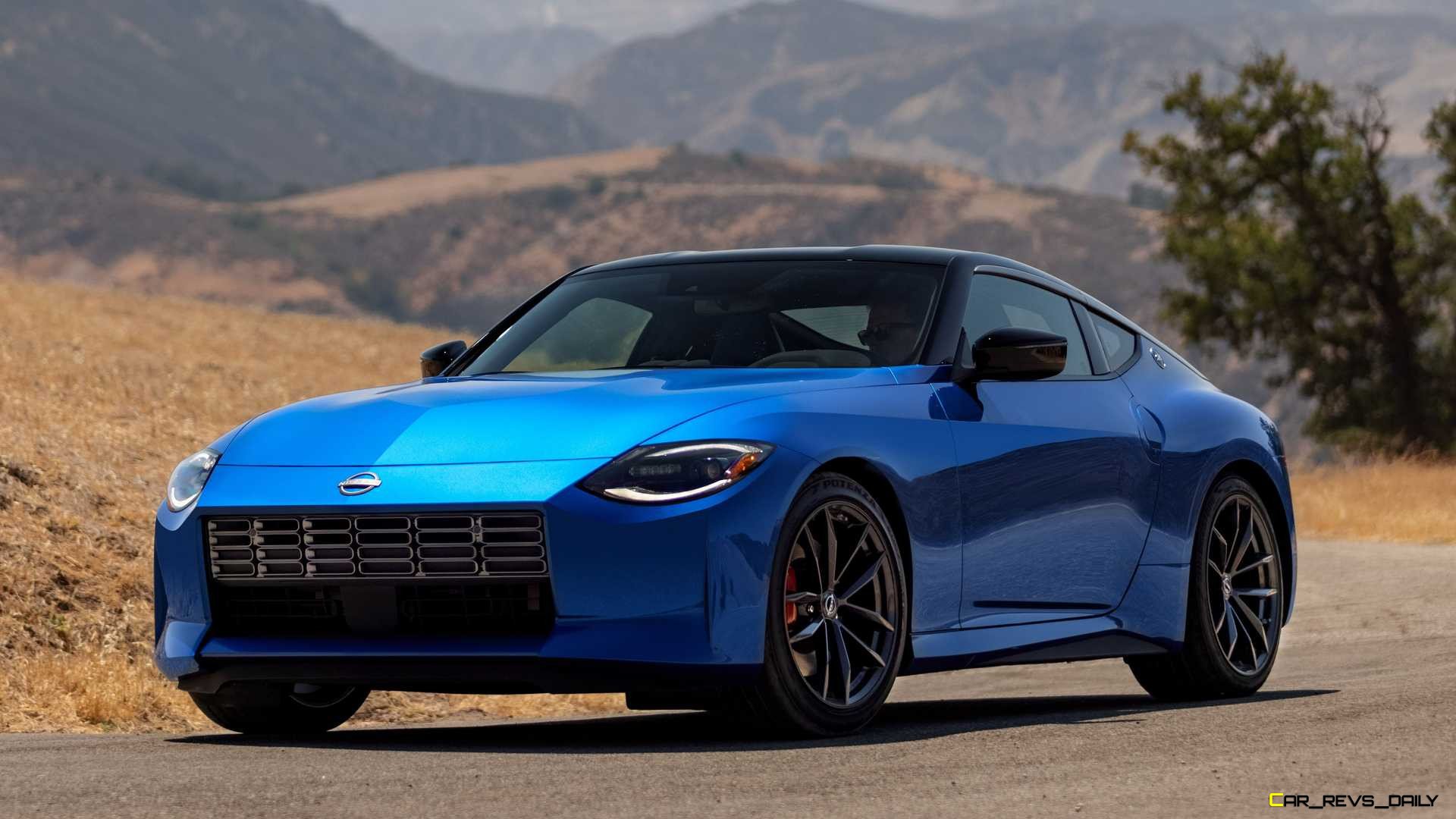 The Nissan 370Z first arrived on the scene a decade ago. While that chapter of Z was initially seen as a significant chapter in the history of the Z moniker, it subsequently became a relic over the years. It still had its fans, ut father time, and the evolution of the segment was not kind to it. Nissan has ended this era of stagnation with the debut of the 2023 Nissan Z, which rockets the car back into relevancy. 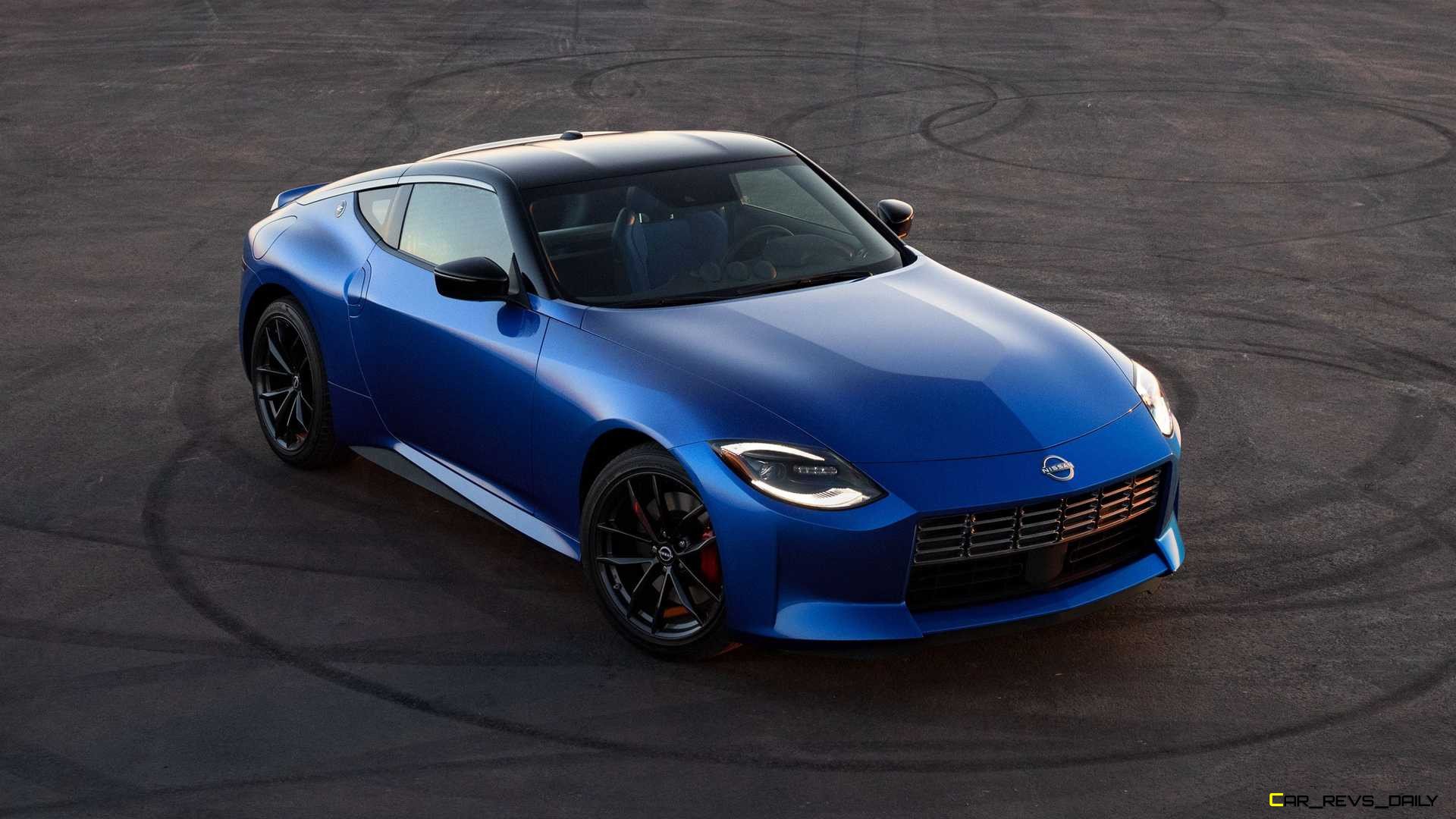 Before we get into all the new things that make the 2023 Nissan Z a hot to trot offering, we might as well address the one thing that it carries over from the past, the platform. While the underpinnings are pretty much carried over from the old car, Nissan claims that it made some improvements to help it stay modern. That includes a tweaked suspension, increased structural rigidity, and an electronic steering rack. The company claims that the new rack offers a more “mechanical feel” than the old unit and can deliver the goods where it counts. But we’ll wait until we have the chance to drive the car ourselves to see if that holds true or not.

With that out of the way, we might as well talk about the slick bodywork that adorns this latest iteration of Z. Nissan designers were clearly influenced by the original Z car, and they also managed to carry over the bulk of the cues from the original Z Proto concept. That includes the squared-off front grille, which blends with the pointed nose and the simpler profile to create an organic appearance. The rear features a blacked-out area that houses the LEd taillights, and the rear bumper also houses a new set of exhaust tips. When the Z makes its way to dealerships, it will arrive in two flavors (Sport and Performance), with Nissan even throwing in a special “Proto Spec” package to please fans of the original concept.

The base Sport model is the perfect reflection of a budget sports car, with that model coming equipped with 18-inch wheels and a nod towards simplicity. The Performance model is where buyers will need to go for more aggressive undertones with bigger 19-inch wheels, a subtle rear spoiler, and wilder colors being offered. Regarding colors, Nissan will offer nine different hues on launch models, with six of them being two-tone colors that offer contrasting black roofs (Brilliant Silver, Boulder Gray, Seiran Blue, Ikazuchi Yellow, Passion Red, and Everest White.) 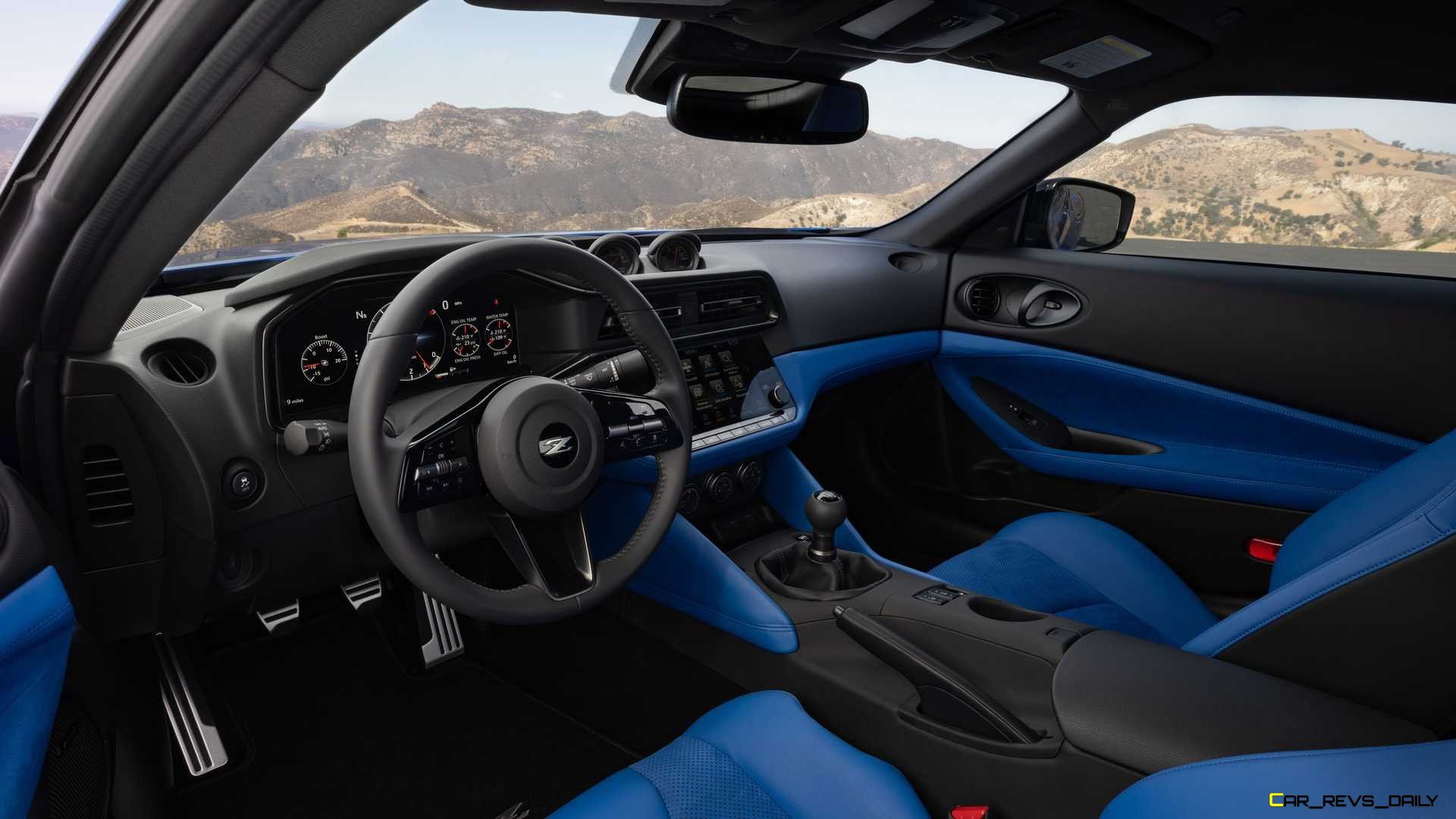 Slip inside the Nissan Z, and you might think you made a wrong turn and ended up in the Nissan GT-R. The cloth or leather bucket seats do a pretty good job mimicking the ones found in the GT-R, and the rest of the cabin is a tasteful blend of modern and classic sports car tropes. A dash-mounted cluster of analog gauges is a nod to the 240Z’s while the digital instrument cluster is clearly aimed at Gen Z buyers. An 8.0-inch touchscreen infotainment system is standard on the Sport, but it can be swapped out for a bigger 9.0-inch unit that comes with baked-in navigation and WiFi capability.

The interior also stands out with some of the vivid hues offered on it, with Nissan revealing that buyers can get an all-blue interior or even an all-red interior. Performance buyers that opt for the Proto Spec package get a few exterior tweaks, but the interior is where it all meshes together with those cars getting yellow accents, Proto Spec leather, and splashes of suede inserts. These models will be rare, though with Nissan only making 240 examples of the Proto Spec (another nod to Z cars of the past.)

Performance Gets A Boost Thanks To New V6 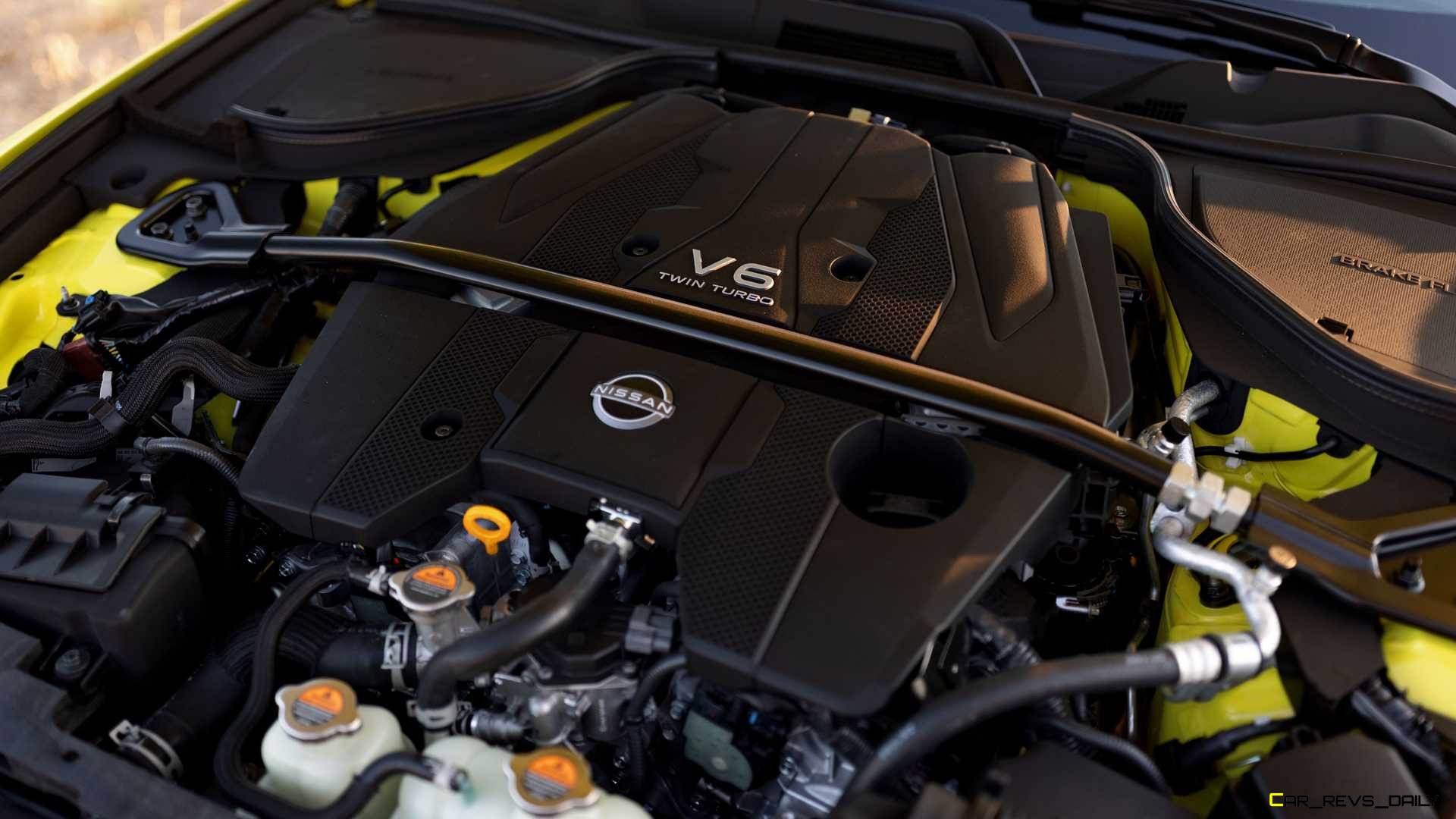 The key ingredient of any Z car is the performance hardware that lurks underneath the hood. In the case of the new Z, the ancient 3.7 liter V6 gets kicked to the curb and is replaced with an all new 4.0 liter twin-turbocharged V6 which makes 400 hp and 350 lb-ft of torque with all of this power going to the rear wheels only (no AWD will be offered.) Drivers will notice the 68 hp improvement over the outgoing Z. While Nissan chose not to reveal official 0 to 60 times, the company did claim that the new Z will be 15 percent quicker than before, which would put the Z somewhere in the 4.0-second range for the sprint to 60 mph. However, we will have to wait until Nissan releases that information to pin that figure down accurately.

A six-speed manual transmission is the base transmission on hand, with Nissan engineers equipping it with a launch control system, rev-matching software, and a high-performance clutch. Choose the optional nine-speed automatic, and the launch control and rev-matching technology get carried along with it. Performance models go one step further and add aluminum steering-wheel-mounted paddle shifters, which help enhance the look, and are also lifted from the GT-R.

In addition to the formal performance upgrades, Nissan engineers also improved the Z’s safety game and have added some welcome additions that aim to help keep drivers safe with notable items such as adaptive cruise control, blind-spot monitoring, and even rear cross-traffic alert.

Nissan did not reveal official pricing or final availability of the 2023 Z, but with the outgoing model firmly nestled in the mid $30,000 range, we suspect that some early predictions of a $40,000 base price are not that far off the mark. The car is expected to gon sale early next year. When it does, it will undoubtedly be a welcome breath of fresh air to Nissan showrooms not only with its group of buyers but also those that might be drawn to it when they first walk in but might leave later with a different Nissan product.

Nissan is in the middle of a broader product renaissance, with models like the newly redesigned Frontier and the Pathfinder being revamped to help bring more buyers to showrooms. The Nissan Z will be the figurative cherry on top for now, at least until the rumored next-gen GT-R appears.