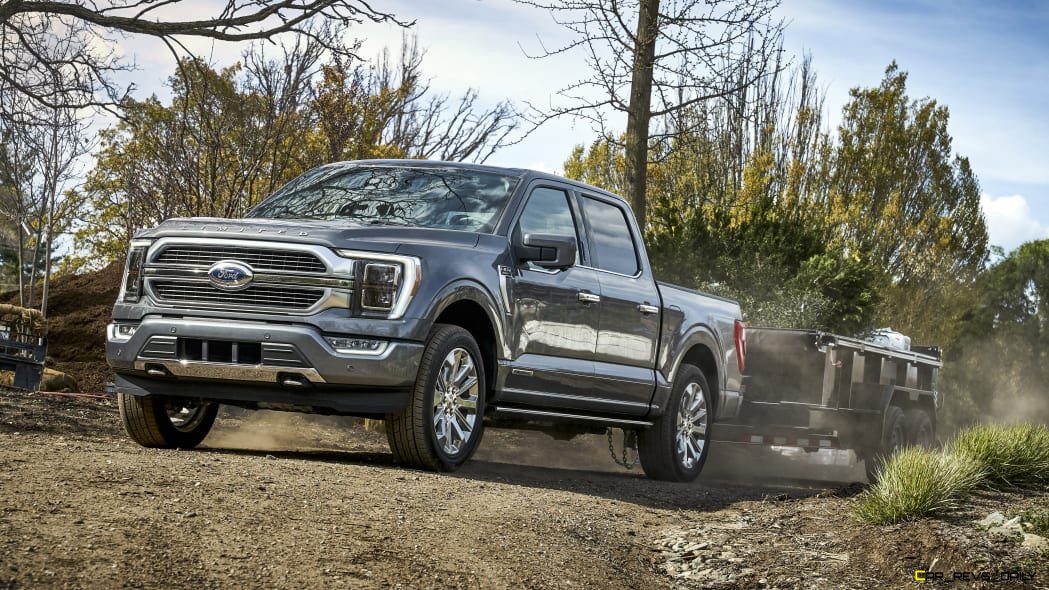 The 2021 Ford F-150 has rapidly become a worthy successor to the outgoing model thanks to reworked styling inside and out and the clever solutions that it brings to various aspects of the job site. But like all of us, an automobile can occasionally learn a new trick or two while on duty, and Ford has revealed that the F-150 will be getting some new technology aimed at making towing easier for buyers.

A big change that owners will notice is what Ford calls the “Onboard Scales” system. The way it works is a two-part affair, but when you put a load into the bed, the truck will actually display the approximate weight of the items in a menu on the infotainment screen as well as through Ford’s familiar FordPass app. The system can also be zeroed out when adding new items to the bed, with owners putting the feature into “scales mode.” While this might seem like a minor gimmick initially, it plays a key role in safety, with the truck showing owners weight tolerances to help prevent dangerous overloading.

In addition to these forms of communication, the system also gets a bit creative and uses a small section of the taillights to serve as a secondary measurement tool. Called “Smart Taillamps,” the system uses four small LED bars in the taillight assembly to help display weight. Each of the four bars represents a percentage of weight, with all four illuminated bars indicating that the bed is fully loaded. Go beyond that, though, and the bars will begin to blink rapidly. Each F-150 will also automatically know its limits which helps eliminate some of the guesswork that goes into estimating how much you can formally put in the bed.

The 2021 F-150 is already a very potent towing instrument, but we’ll always welcome any new feature that can help make this process even better. In this instance, it’s the introduction of Ford’s Smart Hitch system. This novel piece of software takes a few pages out of the Smart Scales playbook but applies it in a slightly different way. Instead of focusing on hauling, Smart Hitch is all about towing with the system measuring the tongue weight of a trailer that’s hooked up to the truck.

After it crunches the numbers, the system will provide information on optimal weight distribution and warnings in the event it senses the hitch is overloaded. The Smart Taillight feature is also used as an external source of measurement, with the bars retaining their prior function. Safety is the main theme here as well, and we’re sure that family buyers will be pleased to see that Ford is adding another layer of confidence and security to the F-150, especially when towing a large RV.

The third and final change is the lone performance-focused change here, with the F-150 being the latest recipient of Ford’s continuously variable dampening technology. The Expedition and the Navigator already have the system, and it operates on the F-150 largely in the same way. A computer analyzes readings from various sensors, which then transmits this data to the suspension dampers. The dampers offer near-instant levels of adjustment, and the idea here is to improve the F-150’s ride quality over rough roads.

This also helps the truck survive impacts from potholes, with the computer telling the dampers to firm up as the tire is entering the hole to help it not go as deeply into the hole as it normally would. This helps reduce the risk of a blowout and allows the suspension to avoid some of the broader collateral damage resulting from entering a pothole.

In addition to hitting the path less traveled, the novel dampers also have a special tow mode exclusive to the F-150. When buyers witch on tow/haul mode, this activates a special pre-programmed tune that promotes smoother towing and hauling behavior by better preparing the truck and trailer for poor road conditions.

When Will We See These Features Arrive?

Ford reps stopped far short of confirming final pricing for all three of these features but did confirm that they will be available for customers to order in June, with deliveries of equipped trucks starting in the latter half of summer. Hopefully, we will have a better idea of pricing by the time that happens, especially if the company has managed to make all three of them a good value play for long-haul customers.