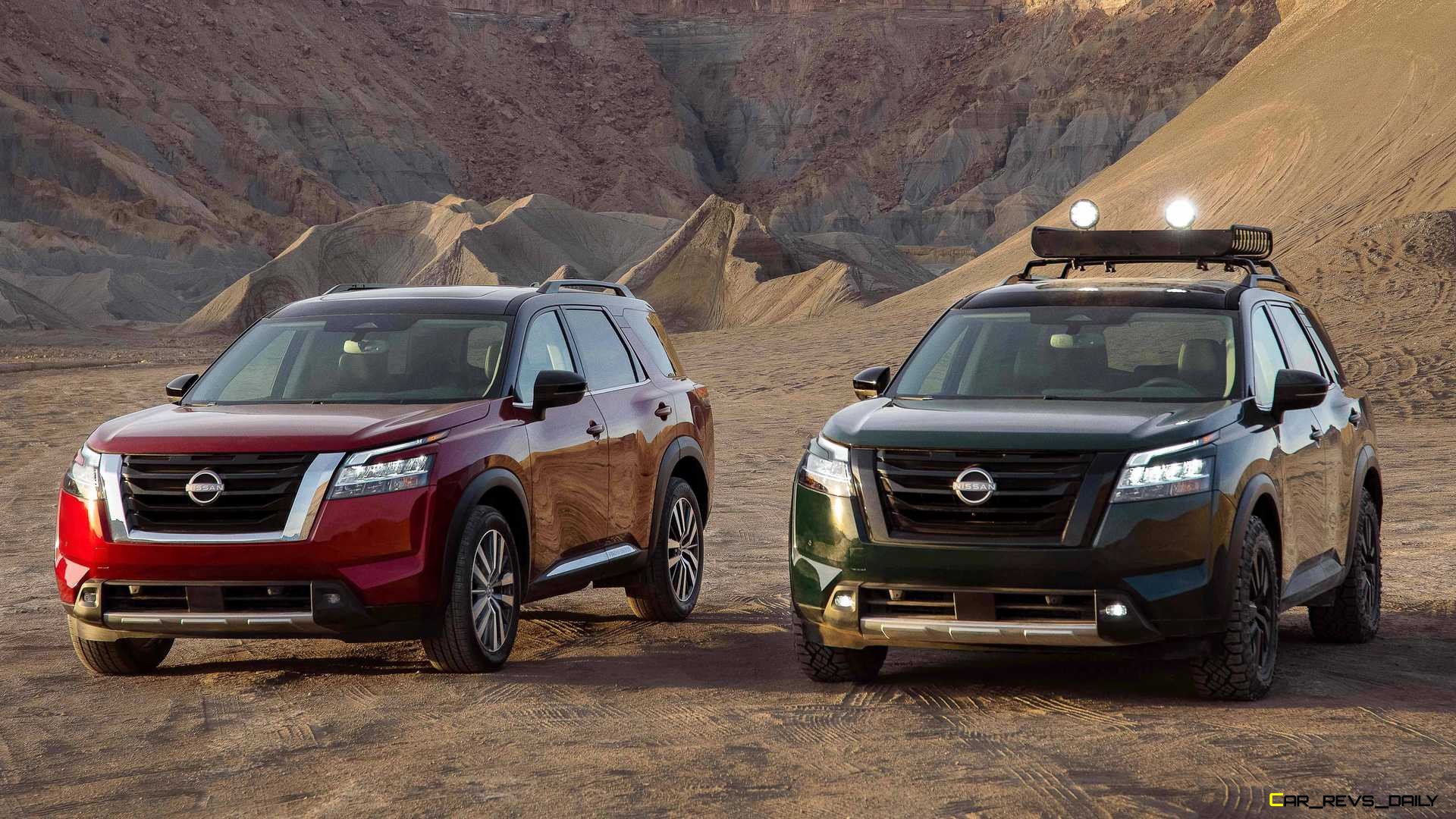 The Nissan Pathfinder has always been a reliable soldier for Nissan when it came to competing in the mid-size utility segment. The Pathfinder is one of Nissan’s strongest sellers. Still, it was also one of the oldest models in its arsenal, with the Pathfinder only bested in that dubious distinction by the outgoing Nissan Frontier pickup. Nissan is keen to keep the Pathfinder viable and has unveiled the updated 2022 Pathfinder to the digital masses.

What’s Wrong With Being Confident?

Much like the hit song by music artist Demi Lovato, Nissan aimed to make the Pathfinder look much more confident for the 2022 model year. A newfound sense of edginess dominates the Pathfinder’s design, with the front fascia now featuring new headlights with turn signal eyebrows, a V-Motion styled front grille, and a flatter hood that helps the Pathfinder look a bit sportier. The rear of the Pathfinder features slender LED taillights for more elegance as well as a reworked bumper. Nissan claims that the bold PATHFINDER script and the liftgate’s convex shape are supposed to be a subtle tribute to the first-generation model, but we don’t see the resemblance.

A second Pathfinder features a slick coat of green paint and a roof rack, mounted lighting system for off-roading. It will be interesting to see if the lighting system will make its way into the accessories pool, but Nissan has so far not stated whether that’s indeed the case or not.

In the world of utility-focused family vehicles, the interior can ultimately be the one item that can either make or break an offering in buyers’ minds, and Nissan wanted to make sure that it put families first. The 2022 Nissan Pathfinder seems poised to make a good first impression thanks to some of the new technology that will make its way into the three-row offering. A 12.3-inch digital instrument display and a 10.8-inch heads up display are just some of the new technologies that will be making their way to the Pathfinder.

An 8.0-inch touchscreen infotainment system with Apple CarPlay and Android Auto is standard, but buyers can go for a bigger 9.0-inch unit if they want a bigger screen. We suspect that the upgrade will require you to climb the trim ladder slightly and mirror that of the smaller Rouge, with the bigger screen being available in the SL and Platinum trims. The driver will also notice that Nissan opted for a sportier control setup on the Pathfinder this time around, with many of the controls being canted towards the driver. Nissan revealed that its offering three different seating materials for the Pathfinder, with the standard woven cloth seats being supplanted by traditional leather appointments and a special semi-aniline quilted leather material. Look for the Quilted leather to be a staple of Platinum models, but we won’t judge if you stick with the cloth seats, especially since some recent Nissan models have had very comfortable cloth seats.

Families looking to haul passengers will be pleased to hear that the Pathfinder has transformed from a seven-passenger offering to an eight-passenger beast of burden for 2022. Nissan claims that this was achieved with an all-new three-position bench seat that allowed Nissan stylists to cram in the extra passenger. Buyers willing to lose one seat can opt for seven-passenger second-row captain’s chairs. Nissan did not reveal any figures related to passenger space but did disclose final cargo measurements. The room behind the third row, for example, measures 16.6 cubic feet, which is a meager 0.4-inch improvement over last year’s model. Fold all the seats down, and buyers have 80.5 cubic feet of space. That’s enough for a family road trip or to accommodate a 4×8 sheet of plywood when you make the trip to Home Depot. Storage space is abundant in other ways, with the Pathfinder coming equipped with plenty of storage nooks and cubbies. That includes a center console-mounted space that was opened up with the new electronic shifter.

Performance for the 2022 Pathfinder is like looking at two sides of a coin. Power comes from a carryover 3.5 liter V6 that’s good for 284 horsepower and 259 lb-ft of torque. The big change here is what’s hooked up to it with the CVT being put out to pasture. In its place is an all-new nine-speed automatic that promises to deliver better performance and fuel economy. Nissan also claims that the Pathfinder has a class-leading 6,000 lb towing limit. But that figure comes with an asterisk since it appears Nissan took a page from iconic boxer Canelo Alvarez’s playbook and cherry-picked an opponent or two.

A case in point is how Nissan chose to conveniently place the Dodge Durango into a different weight class, with the company using a V6 powered variant as a comparison tool. While a Durango equipped this way does outshine the Pathfinder by a mere 200 lbs, that’s nothing compared to volume-focused V8 models, which can tow up to 8,700 lbs. That aside, the Pathfinder still manages to swing above its weight class, with the revamped Nissan easily beating stalwarts like the Ford Explorer, Kia Telluride, and the Toyota Highlander.

Safety For The Masses

Nissan’s commitment to safety has never been disputed, and the company is using 2022 to help make safety available for everyone, with Nissan’s Safety Shield 360 being available on all trims. Even the base S model gets in on the act, which means goodies such as automatic emergency braking, blind-spot monitoring, automatic high beams, lane departure warning, and automatic rear emergency braking.

The digital safety net expands when you climb the trim ladder with SV and SL models adding ProPilot Assist as an optional extra. Check that box off, and you’ll gain adaptive cruise control and lane centering. As expected, the Platinum gets all of the fore-mentioned things standard and adds Navi-Link, which uses data from the navigation system to predictively slow the utility down for bends, interchanges, and even freeway exits. Nissan even took time to mention the Pathfinder benefits from some noise reduction, but we will have to wait until we get a chance behind the wheel to see if that’s indeed the case or not.

Nissan did not release formal pricing for the 2022 Pathfinder but confirmed the first examples will make their way to dealerships this summer. Every trim will be available with either front or all-wheel drive. We’re confident that Pathfinder pricing will not deviate too much from the figures that we already see on the current generation Pathfinder.

The 2022 Pathfinder’s launch will also play a broader role in Nissan’s plan to its image in the U.S. market. The Pathfinder will join other refreshed models like the Rogue, Kicks, and the Armada on dealer lots. Many of these businesses are hoping that this impressive level of freshness will allow Nissan to make big strides in the minds of consumers. The Rogue is already proving to be a very successful model for Nissan. The Pathfinder could become a very supportive cast member once it has a chance to formally establish itself in the marketplace.