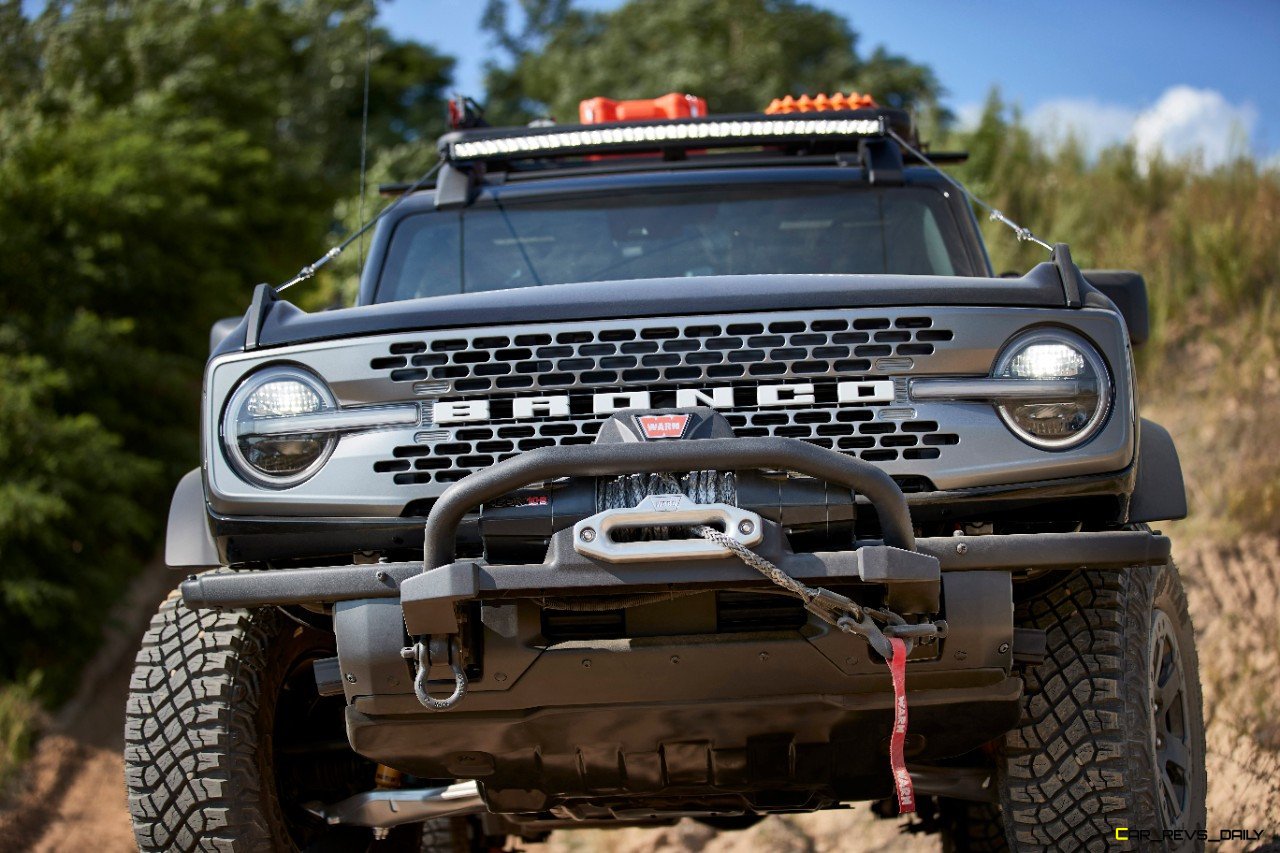 With it’s record setting debut in the books, Ford shifted gears, and took the time to celebrate the Bronco’s 55th birthday this week with a whole lineup of “adventure concepts” that not only showcased the Bronco’s impressive ability to meet the needs of lifestyle focused buyers, but also the sheer number of accessories that can be fitted to it.

The first of the five is called the Outer Banks Fishing Guide which is obviously tuned to the needs of anglers. Ford revealed that the front bumper, safari bar, and off-road lights are all parts from the Ford accessories bin. The lone exception is the first soft top insert for the roof which is actually sourced from the folks at BeStop. Other goodies include a Yakima platform roof rack, a front mounted fishing rod holder, as well as a slide out tailgate with Ford claiming that last item will be an available option on Bronco in the 2021 model year.

The next two concepts use the smaller Bronco Sport as a canvas, with the Bronco Sport Tow RZR showcasing a configuration for those that need to haul smaller ORVS. As the name implies, the Tow RZR (“tow razor”) is hauling a Polaris RZR XP Turbo 1000 ORV with the Bronco Sport in question being equipped with a Class II trailer package to tackle the challenge. Other goodies include a Yakima roof rack and basket to allow for extra cargo to be placed on the roof. A more potent suite of upgrades was outfitted to the Bronco Sport Trail Rig concept, with the SUV getting a 1-inch lift from an unnamed aftermarket vendor for more ground clearance. The front nudge bar and the BFG off-road tires are also not factory issue, but this particular exercise does show that when equipped with the right blend of aftermarket parts and accessories, the Sport can be a formidable off-road offering.

The Bronco Trail Rig concept returns to the bigger Bronco, and it shows what can be done to make the standard Bronco trail ready. Unlike the Bronco Sport Trail Rig, this one is purely a Ford Performance concept, with Ford claiming that virtually everything on the concept (minus the roof rack) was made by Ford in house as part of an effort to reduce development costs. The winch, tube doors, bumper, light bar, recovery boards, and the recovery kit as a whole were all created by Ford themselves, with the limb risers also being custom created. With the Trail Rig moniker being used on both models, it does make us wonder if it could be the basis for a future package, or perhaps even a special edition offering (only time will tell on that front of course.)

The fifth and final concept serves a very different purpose, and actually serves as a visual teaser for Ford’s Off-Roadeo events. Dubbed the Bronco Sport Adventure Patrol, this particular vehicle is an example of what the crew vehicles for the Off-Roadeo would look like. The crew vehicles start life as Bronco Sports, and are equipped with a number of features to help rescue off-roaders in the event they get in over their heads. A novel feature that caught our attention is the drone that accompanied this particular example. The drone helps in location and recon work, and even has a small landing area setup on the hood for the drone to rest in when it is not in use. Speaking of those events, Ford also used the opportunity to reveal that the first Off-Roadeo event will take place in Austin, Texas which is known for its hilly terrain as well as a strong youth buyer market.

“Getting into the wild is at the core of Bronco brand, and our first Bronco Off-Roadeo location in Austin, Texas, will help fuel Bronco fans’ quests for outdoor adventure,” said Mark Grueber, Bronco brand marketing manager. “At each of our four Bronco Off-Roadeo locations, we want owners and enthusiasts – even those who are off-road novices – to have as much fun as off-road pros and we want to provide them with knowledge and experience to make their future Bronco adventures even greater.”