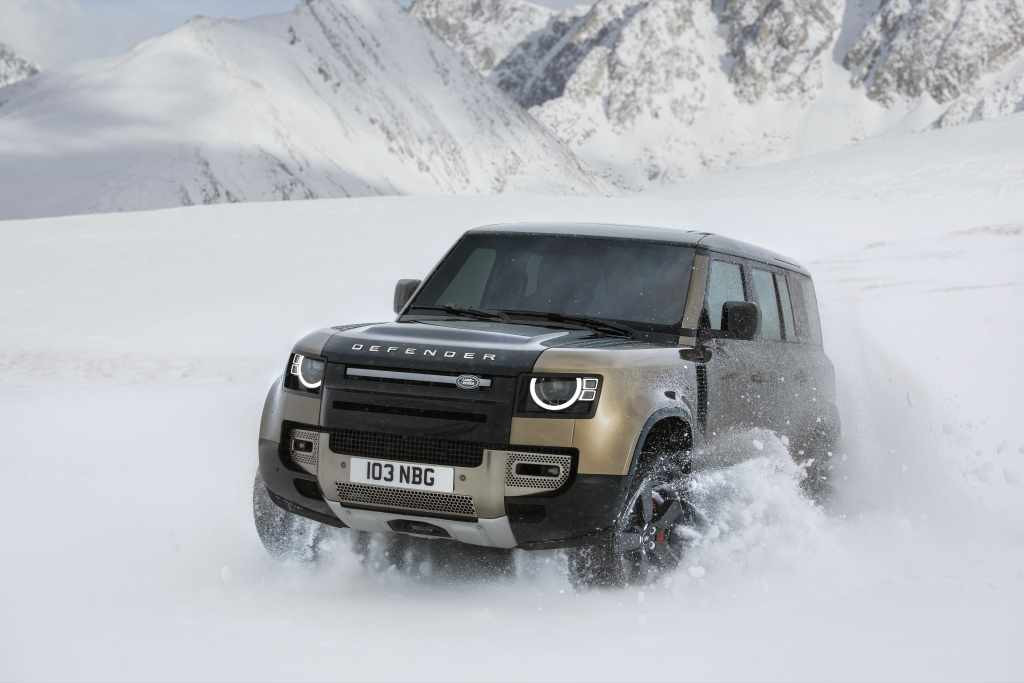 When The Defender ended production in 2016, it signaled the end of an era where brute ruggedness and world class off-road capability were enough to stand out from the rest of the SUV ranks. Indeed, the Defender came packed with capability, and it also had a very impressive bloodline that traced its roots back to some of the first Land Rovers ever produced. But while European buyers were without their fix for only a few years, U.S. fans had a much longer wait, with our version of the Defender leaving our shores back in 1997. But at long last, a new king has emerged for 2020 to not only unite all of these global markets, but to also rewrite the Defender’s reputation for rugged dependability.

The exterior styling of the 2020 Defender is a very tasteful yet modern interpretation of some of the functional cues that once defined its iconic predecessor. There has been a noticeable nip and tuck here and there, but we like what Land Rover designers have done with the basic motif. The front fascia for example has a distinctively blocky appearance, but features slick LED headlights that are enclosed in a square shaped enclosure, as well as a simple one piece front grille that further embodies its purpose in life. The side profile leads to the short rear fascia that features LED taillights, and the welcome addition of the rear gate mounted spare tire. This new look will certainly please buyers, and it also serves as a very potent blank canvas for certain buyers that want to customize their ride.

This is especially apparent when one looks at all 170 accessories that are available for the Defender, with Land Rover reps obviously targeting the Jeep Wrangler, and its equally impressive arsenal of custom features. This move might seem relatively new to U.S buyers, but over in Europe, the Defender and the Wrangler have always been in a rivalry of sorts, and both are popular choices for off-road enthusiasts in that part of the world. While many of the accessories are catered towards pleasing the aesthetic side of things, there are some key ones that certainly catch our attention. These include items such as a raised intake snorkel, a front mounted winch for pulling the Defender out of trouble, as well as a novel pressure rinse system to help keep the Defender looking nice and clean when it is time to get back into the urban jungle.

Lastly, the Defender also takes its design flexibility to new heights, and actually one ups the Wrangler by offering four different design packs that serve as an incremental ladder to reach the pinnacle of its capabilities. At the bottom of the ladder is the Urban Pack which is designed for those that consider trips to shopping mall and other aspects of the urban jungle to be their adventure. This pack adds a cover for the spare tire, metal accented pedals, as well as other minor bits of bright work to help enhance its street cred. Meanwhile the Country and Adventure packs are where the Defender begins to take its off-roading duties much more seriously, and these two packs add goodies such as an external gear carrier, an internal air compressor, a power rinse system, as well interior storage partitions among other off-road goodies. Lastly, the Explorer pack is at the top, and it goes all out in transforming the Defender into a safari ready entry. This is due to the lightweight roof rack that is added to the top of the SUV, as well as novel side gear carriers that adorn the sides like massive saddlebags. A raised intake and trim exclusive decals round out the look, and do a good job of making the Defender stand out on expeditions.

Like the exterior, the interior also embodies the Defender’s utility focused mission in life, and while it gives up some elegance to its corporate cousins, it still manages to achieve its goal of being a very functional place to spend time in. The exposed bolt heads are a subtle nod to the original, and while the rather plain looking dashboard may not look that elegant at first glance, it’s functionality is hard to ignore, with the cabin offering copious amounts of storage space, as well as grab handles to enhance entry and exit into the Defender. The Defender also debuts the all new Pivi Pro infotainment system, which aims to finally resolve one of the few issues that still continues to hobble the brand. Unlike Land Rover’s other systems, Pivi Pro is always on,which means as soon as the engine is started, the system is ready to go via the big 10-inch touchscreen. Land Rover claims that this reduces lag and load times by 50 percent, though we are keen to see this for ourselves before we can finally say they worked out all the kinks in this arena.

Performance for the 2020 Defender comes from a pair of engines, with the bigger Defender 110 arriving with a standard 2.0 liter turbocharged engine that is good for 296 horsepower and 295 lb-ft of torque. The 110 is also the only way to get a third row, but the engine still allows the 110 to make the sprint to 60 in 7.7 seconds which is pretty respectable for a big SUV. Meanwhile the smaller Defender 90 model comes standard with the same turbocharged inline six engine that also sees duty in the bigger Range Rover hybrid. This electrified engine can also be equipped to the 110, and allows the 90 to make the sprint to 60 mph in a brisk 5.7 seconds with the bigger 110 doing the same feat in 5.8 seconds. Both models send their power to all four wheels through an eight speed automatic transmission, and the Defender arrives out of the box with Land Rover’s full time all wheel drive system which includes several different drive modes as well as an active differential to keep the Defender on track when it goes off the beaten path. The optional air suspension also plays a key role, and allows the Defender to go from having 8.5 inches of ground clearance, all the way up to 11.5 inches at the push of a button.

The 2020 Land Rover Defender will make its way to showrooms in early 2020, with the initial assault being led by the bigger 110. The smaller 90 variant will follow suit, and we hope to see the Defender possibly adopt diesel or even full hybrid power to help expand its arsenal of performance and fuel economy weapons even further. Final pricing has not been released for the 90, but it is known that the 110 will have a base MSRP of $49,900, with inline six equipped models easily surpassing $63,000. Sticker shock aside, it’s good to see this icon thunder its way back into the spotlight, and look for it to immediately resume its rivalry with Jeep, but now with the whole world as their battlefield, and the two of them trying to swing their haymakers in a rapidly growing vehicle segment.