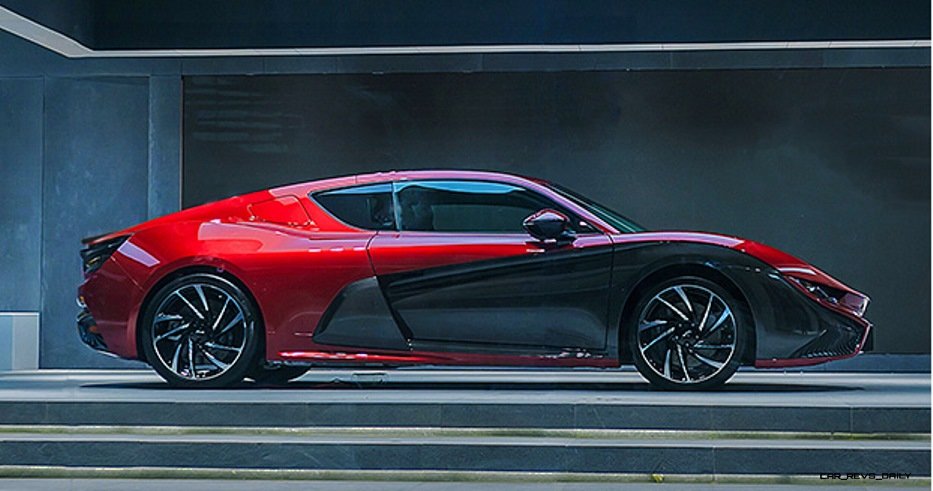 In an announcement that was released earlier this week, California based Mullen Technologies and its Chinese partner Qiantu have revealed that the duo’s K50 sports car will be making its debut at the 2019 New York Auto Show in April, with both companies revealing that initial sales of the Qiantu K50 will begin in the U.S. market in 2020.

Sports cars have come and gone over the years, so what makes the K50 stand out from the rest of this elite segment? For starters, it is a relatively well proportioned entry, that features an all aluminum body frame, and even features lightweight carbon fiber body panels. The styling itself is not that radical, with our trained eyes spotting some McLaren influence in the side profile, as well as hints of BMW i8 in other areas, but it is still a very beautiful presentation, and should do a good job turning heads wherever it goes. The only flaw we see are the small rims, which do not quite match the checks written by the sweeping side profile. Hopefully both companies will offer slightly bigger hoops to allow the K50 to have a much more imposing profile as well as a slightly more balanced look.

The sleek body of the K50 covers a highly engineered chassis that features front and rear double wishbone suspension with the tune being calibrated by the firm Mira. Both Mullen and Qiantu promise that the car will reward lucky buyers with “precise handling and ride feedback to drivers” which can be roughly translated as to offering a pretty sporty and relatively engaging handling experience. Stopping duties are handled by a Brembo braking system that features four piston calipers at all four wheels, with the units themselves hiding behind lightweight aluminum alloy wheels that are shod in Pirelli P Zero performance tires. Look for this sticky rubber to help make the K50 shine on weekend track days, or fun sprints up and down your favorite coastal freeway.

Performance comes from an all electric powertrain with the K50 debuting Qiantu’s Rechargeable Energy Storage System (RESS.) The system is at first glance your typical run of the mill battery pack, but Qiantu engineers claim that it can produce an NEDC driving range of 230 miles on a single charge. In fact, both firms also revealed that RESS can achieve a higher cruising range of over 320 miles. As expected, horsepower and other juicy details such as a 0 to 60 time, quarter mile times etc are being kept heavily under wraps by both Qiantu and Mullen, but expect these figures to be formally revealed closer to the K50’s unveiling in New York. Mullen’s plans for the K50 state side are also shrouded in a cloud of mystery, but it is believed that the firm will initially sell the K50 in a limited production run, with Mullen perhaps changing its distribution plans depending on how well received it is by the buying public. Thankfully it appears that pricing will be on the relatively bargain focused end of the high end sports car segment with the K50’s ¥750,000 base price roughly translating to $112,500 in current exchange rates.

The K50 is certainly a unique enigma, especially considering that its U.S. debut is the result of a rare collaboration between east and west. Only time will tell if the K50 manages to be a sucessful venture for both Mullen and Qiantu, but based on what we see at this stage in the game, it looks like the future is bright for their upcoming sports car.