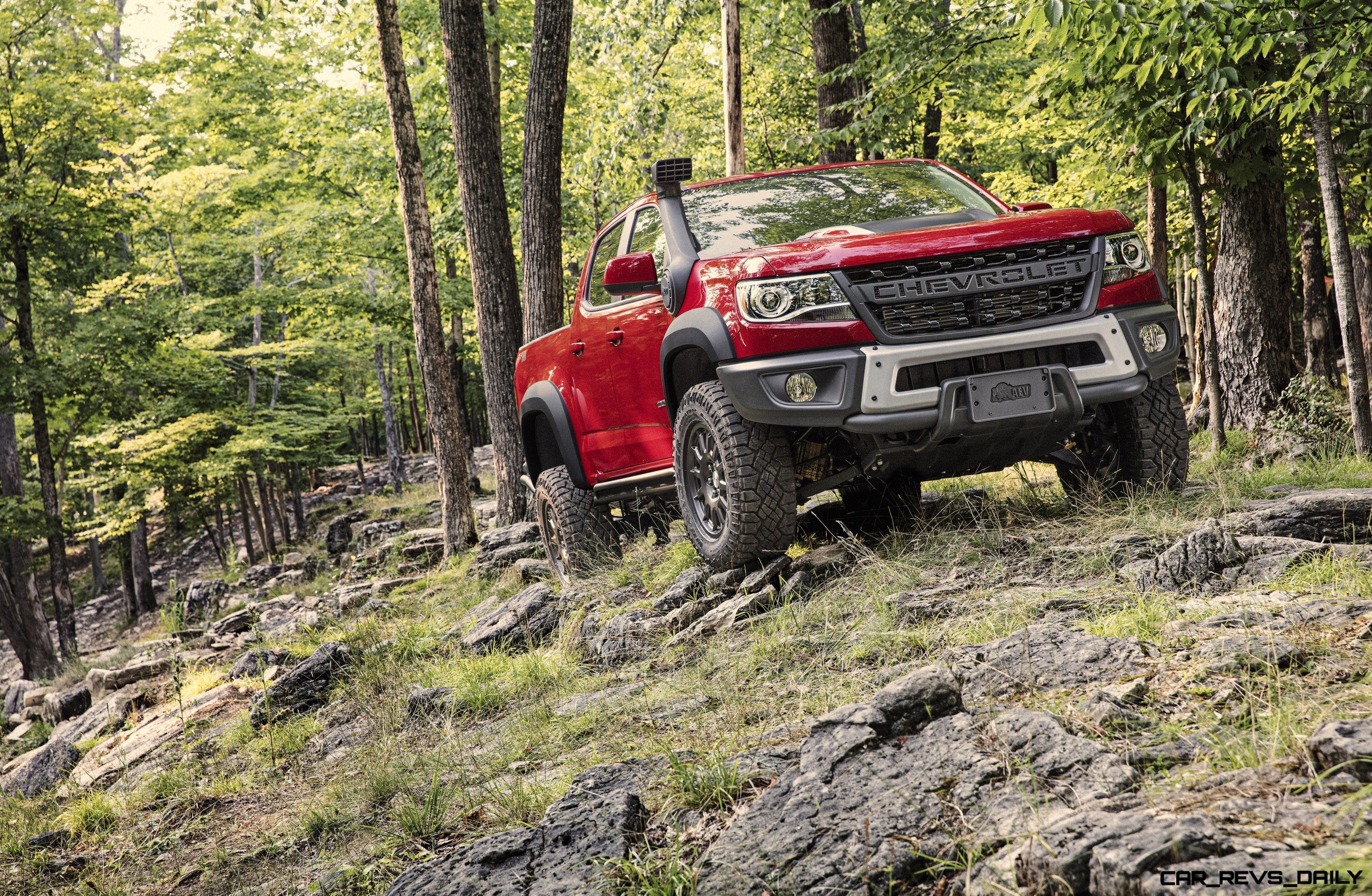 The Chevrolet Colorado ZR2 already has alot going for it. Serving as GM’s latest and perhaps most successful attempt at toppling the Toyota Tacoma Pro from its segment leading status, the burly ZR2 brings trick Multimatic DSSV shocks, and a optional diesel engine to appeal to a broader off-road audience that only demands the best from their ruggedly built purchase. But what if your a Colorado buyer that craves just a bit more capability from your ZR2 purchase? Chevrolet has you covered with the burlier and all new 2019 ZR2 Bison.

Crafted with the help of American Expedition Vehicles (AEV,) the Bison is not designed to be an all out off-roading machine, instead, it represents a perfect cocktail of equipment that aims to add a pinch of extra capability to the ZR2’s already potent resume. Speaking of AEV, the creation of this truck is a notable departure for the outfitter, which has usually been long associated with FCA’s Jeep and Ram brands, and has crafted awe inspiring creations in the past as a result, which includes the outrageously awesome Wrangler based Brute pickup truck .

When it came time to create the Bison, Chevrolet and AEV designers were clearly influenced by the ZR2 AEV concept that debuted in 2017 at SEMA. However, several key details have been changed for the production version. The tactical (AKA Raptor) style front grille has been carried over and is a noticeable improvement over the more pedestrian looking one on the stock ZR2, but the winch wielding front bumper has been reworked, possibly for safety reasons. The rear bumper features tubular protection for the corners, and it even has integrated recovery points to receive tow hooks in the event the Bison needs to be winched back onto the trail. AEV’s snorkel system is also available (albeit as an optional extra) and not only does it come with its own warranty, but it also doesn’t void the existing powertrain warranty (a common concern with many aftermarket components.) The snorkel is also one of the few pieces to NOT be exclusive to the Bison, with other Colorado variants also included in the availability pool for this unique accessory.

A key item that is exclusive to the Bison however, are the slick wheels. Chevrolet is very proud of these functionally stylish hoops, with reps even revealing that they are no longer beadlock type units. Sadly, the massive 35-inch BFGoodrich KM2 Mud Terrains worn by the concept did not make the cut, with all Bisons featuring the same 31-inch Goodyear Wrangler Duratrac rubber that also see duty in standard ZR2 models. These tires will certainly do the job, but can easily be swapped out later by owners.

AEV also equipped the Bison with five functional skid plates that cover both differentials, the oil pan, fuel tank, and the transfer case. The fuel tank mounted plate in particular should help add extra confidence and security to buyers looking for more protection in that crucial area. It’s important to remember that the standard ZR2 does not have a plate for the fuel tank, with Chevy stating that its location under the frame rails was sufficient protection. Regardless, we like upgrades that add more safety, and we’re confident many buyers will share our sentiment on that front too.

Each plate is made out of a high strength steel and boron alloy, but neither AEV or Chevrolet have released durability or thickness specs for the material. That said, expect this metal to be rugged enough to withstand abuse, but with a nod towards weight savings as well. The latter is important since boron has been used in other vehicle offerings to help slice precious pounds, which in turn enhances fuel economy.

Pricing information for the Bison has not been released, and that aspect will ultimately be the key factor on the success of the Bison long term. It’s no secret that the truck has a certain trail eating carnivore from Ford in its cross-hairs, but since this crossbreed appears to be a package tailored towards a balanced suite of equipment and appearance upgrades versus being an all out bruiser, look for the price point to not stray too far from the standard ZR2, which should be good news for buyers that would have otherwise been intimidated by a lofty price tag. It could also give the Bison an edge over the upcoming Ford Ranger Raptor when it eventually arrives in the U.S.

In the meantime, Chevrolet has released a brief video of the Colorado ZR2 Bison in action, which can be seen in all of its informative glory below. We also look forward to having a chance to try this special model in the future, to find out if it is indeed as tough and versatile as the four legged animal that it is named after.