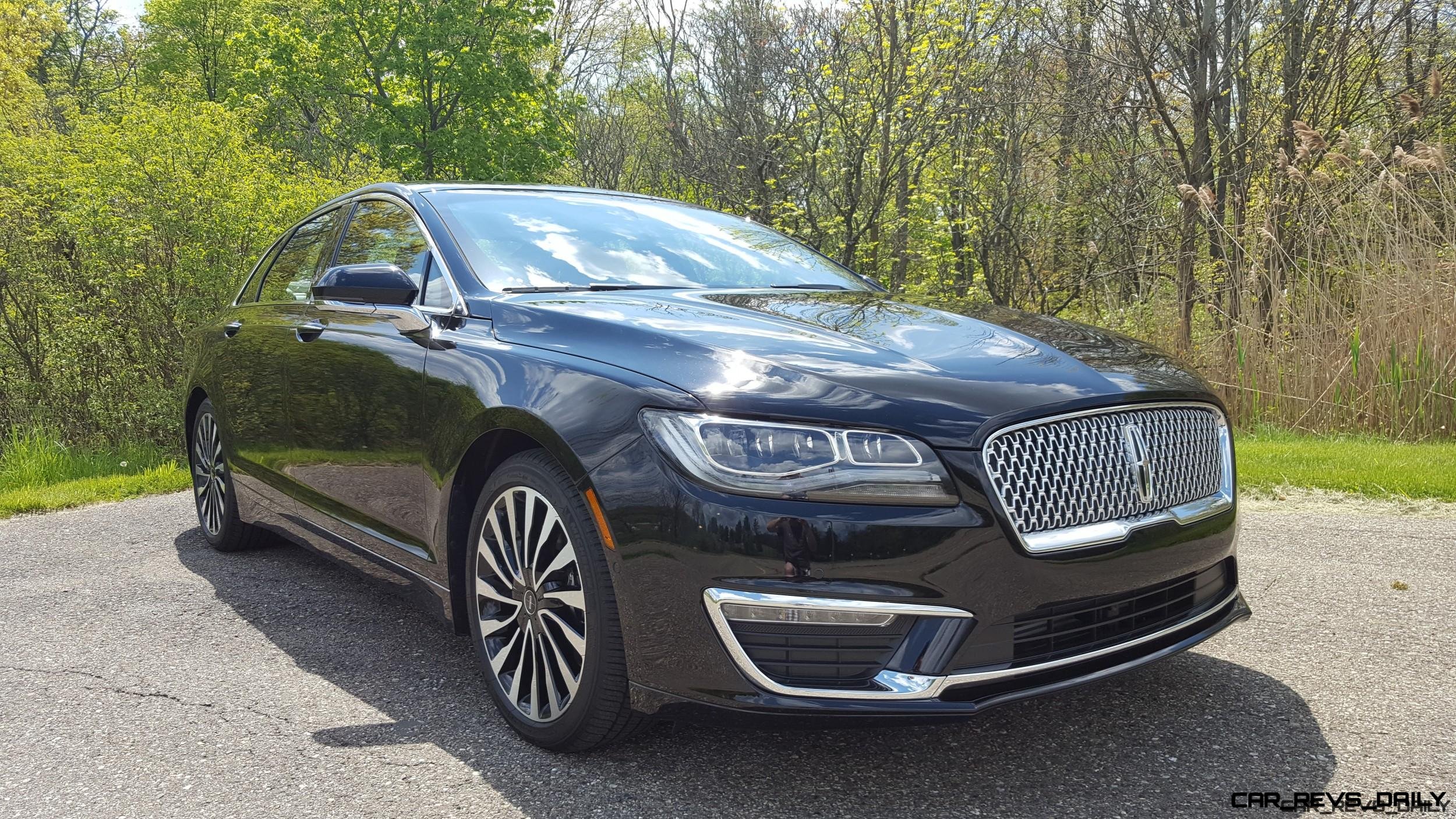 Lincoln has recently seen an upswing in fortunes over the past several years. With slick TV commercials starring celebrity Matthew McConaughey as well as a string of new vehicles, it’s clear that Ford’s once flat lining luxury brand is pulling out all the stops in its quest to lure new customers into its showrooms. But can Lincoln’s new lineup of vehicle’s reflect the new-found pulse that is circulating through the brand? Or do they come up a bit short?

Even though the 2017 Lincoln Continental is currently the vehicle at the forefront of Lincoln’s recent string of TV ads due to its flagship status, as well its host of advanced technologies. We chose to instead focus our attention on the vehicle that is expected to help shore up Lincoln’s volume car buisness, the MKZ. First appearing in its current form back in 2013, the 2017 version benefits from several upgrades including a new front grille and headlights that aim to bring more character to the design.

The end result is somewhat of an improvement with the new chrome grille eliminating the awkward nose that was created with the old dual winged grille. The headlights also do a better job meshing with the fore-mentioned brightwork, and the tweaked lower front bumper helps unify the look as a whole which really helps it stands out during night driving. The side profile of our Diamond Black Metallic tester is clean and elegant and leads the eye straight to the rear fascia which looks futuristic, but sadly doesn’t quite match the character possessed by the bolder front fascia. A neat feature is the lighted welcome mat that is projected from the front doors. While some folks may dismiss this as an un-needed gimmick, it does show that Lincoln is trying to make the driving experience feel special and purposeful in little ways.

The interior of our tester is a textbook example of how technology and progress can help breathe new life into a tired design. The 2011 MKZ’s cabin (built during the brand’s dark days) was known more for its overabundance of plastics, odd wood accent placement, and seats that simply failed at being both stylish and comfortable. Fast forward to 2017, and the transformation is nothing short of impressive. Being a Black Label model, our tester came loaded to the gills with comfort and technology items that aim to further enhance the driving experience. The Multi-Contour front seats in our tester were comfortable and supportive, and we highly recommend these seats not so much for their less than stellar massage capabilities, but rather their impressive degree of support, especially with the adjustable side bolstering suitably tailored to drivers tastes. The interior also features healthy splashes of wood trim, and high quality materials that felt great to the touch and looked good as well.

Head and legroom in the front seats was quite good but the backseats are a mixed bag. While they are still very comfortable and incorporate rear seat heat, taller passengers will not be very appreciative of the atrocious amounts of rear head room, which requires them to slouch a bit to get fully comfortable. One other minor complaint centers around the placement of the buttons that flank the right side of the SYNC 3 infotainment system. While we are willing to give a free pass to the top mounted traction control button, we think the hazard light button should be moved down slightly to make it less of a reach to use, especially for shorter drivers.

Speaking of the SYNC 3 system, it is much improved over prior iterations of SYNC, and it managed to work flawlessly while still delivering sharp feedback through its equally crisp looking screen. Our tester came equipped with the optional 20 speaker Revel Ultima surround sound system, and it delivered outstanding sound quality with crystal clear high and low notes.

While these are all good things, the biggest star here is what lies under the engine bay. A base 2.0 liter turbocharged four cylinder engine serves as the base engine, but we recommend shelling out the extra $2,750 to $4,000 premium (FWD or AWD respectively) for the range topping 3.0 liter twin-turbocharged V6 engine. This particular engine is exclusive to Lincoln, and it transforms the MKZ from a middling luxury car, to a convincing sleeper that can easily surprise sportier cars in a traffic light sprint thanks to its balanced 400 horsepower (front-wheel drive models make do with 350 horsepower) and 400 lb-ft of torque. This beastly power is welcome, but it also forces drivers to use some finesse to properly launch the car. Get it right, and the MKZ can make the sprint to 60 mph in a brisk 5.2 seconds, and hit the quarter mile in an equally impressive 13.7 seconds.

However, while the spirited 3.0 liter certainly checks all the boxes for a proper performance derived engine, other elements of the car come up a bit short. The steering for instance is buttery smooth in city driving, but felt heavy and distinctively numb when navigating twistier sections of tarmac. In addition, the six speed automatic transmission does not like to be rushed, and shifts slower than the 7-speed units seen in rivals such as the Audi A4, and the Infiniti Q50 even when in Sport mode. It’s not all bad news though, since the MKZ still excels at freeway cruising with the quiet cabin and smooth engine delivering high levels of confidence and poise while gobbling up the miles.

In addition to redefining the driving experience of its vehicles, Lincoln also focused its attention on improving the overall experience at its showrooms. An unexpected trip to our local Lincoln dealer to clear a check engine light prior to the MKZ’s photo shoot, gave us a unique glimpse into how effective these changes are, and customers will be pleased with what they see.

The customer lounge is beautiful and modern, with extra attention going into features such as the bar area, furniture selection, as well as the overall design of the space. The formal sales floor also reflects this modern theme, and while the inventory did make it feel slightly crowded, the Black Label lounge is a welcome addition. Stepping into this small space is like stepping into an upscale designer store, with distinctly different furniture, lighting, and even music. A Continental Black Label takes center stage, and helped showcase what the Black Label moniker is all about.

Pricing for the 2017 Lincoln MKZ starts at $35,170 for the base front-wheel drive Premiere model with Select and Reserve models starting at 36,920 and $39,670 respectively. Black Label models like our tester up the ante, and have a base price of $47,830. Our all-wheel drive equipped example had a base price of $49,560, with the price ballooning to an eye watering $59,045. This was mainly due to its $9,485 laundry list of optional equipment, as well as the $925 destination fee. While this figure may seem steep at first glance, the MKZ still stands out against competitors thanks to its 400 horsepower engine as well as its bolder exterior styling. The Buick Lacrosse is an interesting cross shop, and while its top tier trim level does not quite match the posh factor possessed by the Black Label, lower grade models are on par with lower MKZ trims. In addition, the Lacrosse’s chassis also has a slight edge over the Lincoln in spirited driving. Meanwhile the Volvo S60 loses out in horsepower and interior technology, but it is has a lower pricing ladder, and Polestar spec models are formidable performance weapons in the right hands.

When it comes down to it, has Lincoln succeeded in breathing newfound life and swagger into its long term future? While there is still some work that needs to be done around the edges, we think Lincoln has done a good job laying down the ground work for its long term success. With models like the MKZ, Continental, and the soon to be launched 2018 Lincoln Navigator, we think Lincoln has a bright future ahead of it.