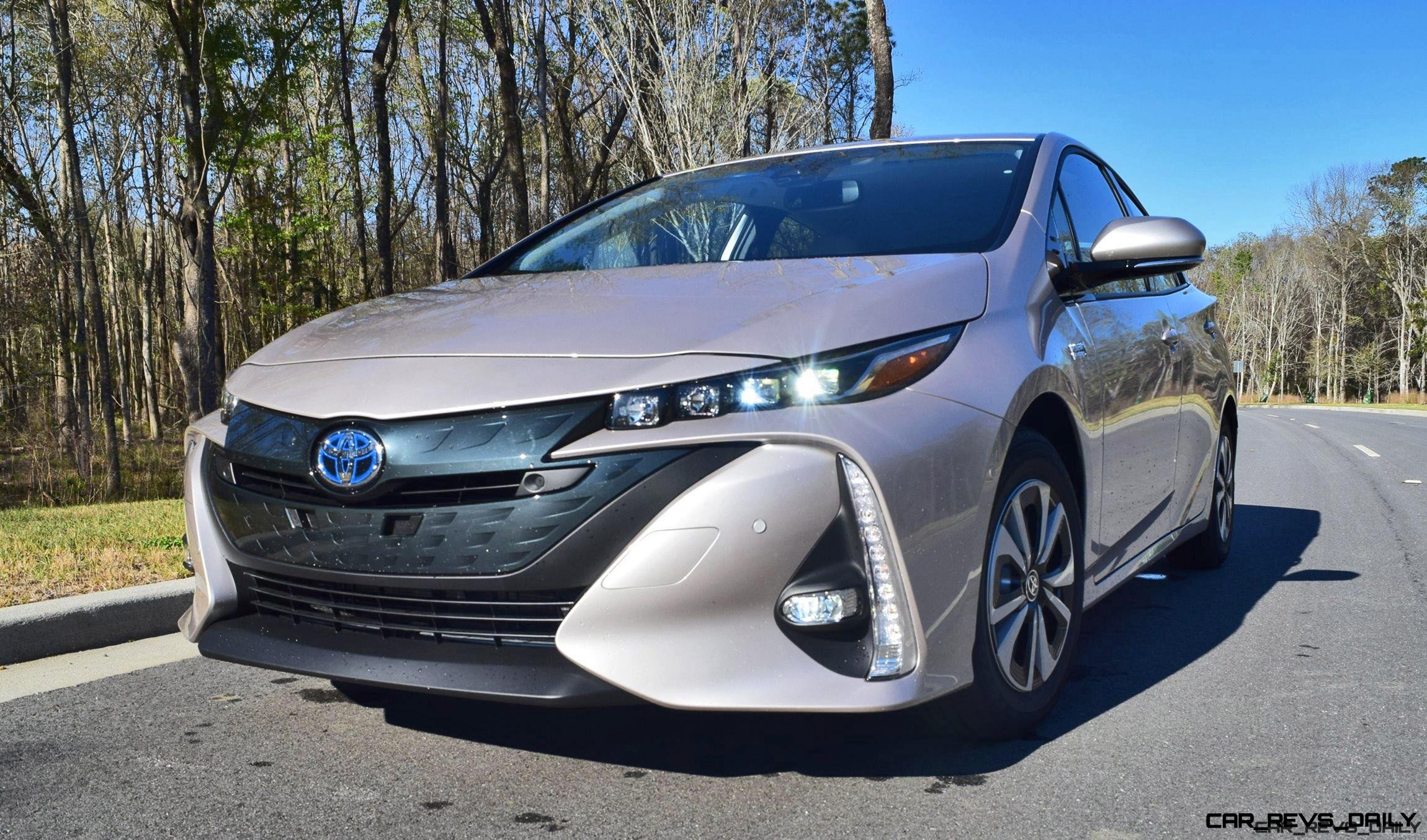 Our hopes about Prius Prime were through the roof.  Gorgeous new looks.  A battery pack 10X as large as the most thrifty standard Prius.  Luxed-up cabin and 20 miles of EV range?

It seemed like a winning formula on paper, and it is a winner in the flesh on the road.

We spent a happy week in the Prime to see how this Super Prius compares versus young gun Hyundai Ioniq as well as full EVs like the eGolf, Focus Electric or even a pre-owned Tesla.  ANd how about the upcoming Honda Clarity Plugin?

There is great and less-great news to report about our darling Sandy, as we nicknamed Prius Prime after two days.  A drive video, walkaround video and 70 photos accompany standard section headings of Exterior, Interior, Performance and Price.

The Prime Prime looks outstanding in person.  This car shares its doors and roof with standard Prius, but goes all new for the nose and tail.  And boy is it effective.

Starting up front, Prime runs standard quad-LED low and highbeams and banishes the slightly cross-eyed look of this gen regular Prius on the road.  These ultra slim lamps are at the top edge of a black/dark grey full frame grille. The grille is two levels of inverted trapezoid, with the edges being a sharp leading edge of the hood and deep body-color fangs on the mid-edge of the bumpers.  On the real edge is a psuedo air intake slash that makes up the full bumper height with a contrast black plastic piece.  Along the whole edge of that slash of bodywork are LEDs for the vertical amber turn signals and three-pack of stacked white LED accent lights.  Inside this area lives the LED foglamps of our Prime Advanced trim level.  All the light matches and is gloriously high-tech and streamlined.

The look of Prime has been called an Acura NSX clone by many, and for good reason.  The NSX essentially has the same face, albeit about half as tall and twice as wide with its supercar proportions.  Even so, it seems like a subtle amount of shade being thrown by Toyota toward arch-rival Honda.

Regardless, Prime looks cool and unlike any other Prius on the road.  Titanium Glow paintwork on Sandy feels pretty fresh, but we prefer white or black for max style.

Moving into the profile view, the Prime conceals its longer-than-normal nose very nicely by pulling the headlights far into the fender corners. Prime is slightly longer than the normal Prius, but this is mostly accounted for out back.  The result are proportions that feel like a regular Camry in the nose, but a large hatchback around the tail.  The longer Prime tail and KAMM-inspired aero for a tail, flat hatchback shape are limits of the wind tunnel.  Toyota massages these details nicely: rising edges along the rear doors meet deeply sculpted rear shoulders that extend far into the door shape.  These huge rear doors make up for the slightly lower rear roofline than Camry – but themselves are disguised too.

The floating roof is painted body color but the C-pillar is blacked-out in a glossy panel blank.  This cleanly flows into the Prime’s incredibly advanced trunk and back glass.  This tailgate is TOyota’s first production-car application of carbon-fiber reinforced composite – you can even see its weave on the underside of the door.

Why go exotic on this one panel?  To keep weight down, strength/safety up, of course.  But more directly, to accomodate an cutting-edge aero solution: the melted concave shape of the mid section of the back glass.  This actually sinks down to channel air smoothly off the sharp-edged tail cleanly and without drag.  Classy engineering, indeed.

The tail is just as fresh as the nose, if slightly less exciting.  The cool elements are mirrors of the nose: sharp bumper edge slashes that hide LED turn signals.  Cool and unique.  And then we have the brake lights themselves: a slim line of red LED that wraps the top corner of the tailgate in a ribbon of light.  On brakes, the edges light up their internal LED stack in a very unique way.  The center brake light, for example, is in that ribbon of lamp unit.  And at night, the Prime on brakes has a smooth, shaped lightbar.  Super cool.

Less awesome is all the surface area between the lower bumper and this sweet lightup glass.  Lots of body color makes Prime feel quite tall from behind and the rear three-quarter angles.

This would be helped radically by larger wheels.  But alas, Prime worships the eco gods and these 15-inch steel pizza-cutters are the largest available.  10-spoke alloys are on the accessories list but are still just 15 inchers.  Eeek.

Overall, however, Prime gets a strong A grade for design.  With bigger wheels and some tinted glass, this might just be a stylish way to never get gas!

The most important changes to Sandy (the PRIME) in terms of the cabin.  First, it seems far more silent than regular Prius.  This is evident around town but night/day on the highway.  Prime just feels much more insulated and away from tire and wind noise.

This goes double for when the Prime is in EV mode with some plugin time.

The other notable upgrade is the touchscreen.  This goes to a portrait-oriented monitor that has room to display nav, climate and audio at the same time.  While the screen is large and has impressive touch responsiveness, it lags well behind any Tesla on graphics quality and multi-touch precision.  The same exact Toyota infotainment and settings controls start to look low-res and washed out when placed in such a giant panel.  We also took a few days to get comfortable with some climate and audio controls.  Main buttons beside the screen are helpful for temp, volume and to return to the home screen.  No knobs, however, for tuning the XM or audio through the upgraded JBL10-speaker audio system.

In terms of luxury, the Prime starts with a pretty limited amount of kit.  This softex leatherette is a desirable element of the Advanced trim for how lux it feels versus the normal sporty fabric.  But the cabin only has two color schemes available: white or black.  We like the Panda white with all its bright dashboard airiness, Apple-ish white plastic console and funky different-ness.The white also stays much cooler in the sun – but both colors of Softex leatherettes stay pretty cool versus regular leather.

Other Advanced upgrades are the active safety systems of adaptive cruise, lane-keep and parking sensors all around.  We also add a heads-up display that is very worthwhile.  It puts your speed back in line-of-sight, as the main gauges are still centrally mounted in the upper dash.

Steering wheel controls for the whole gauge display is easy, even if it looks a bit busy up there with so many different icons illuminated.

Drive modes for Prime add a power management button to switch among EV/EEV Auto and HV modes, in addition to the standard drive modes of Eco, Normal and Power.

With some charge in the battery, you can save juice for EV-only driving on command.  In mostly highway driving, (and mostly in PWR mode!), the drivetrain modes were locked out due to low battery charge.

Lastly, the back seat of Prime is extra roomy for two this year… but not for three.  Only two seatbelts bring a fixed center console back there instead of a seat.  Part of the battery pack occupies this space.

The pack also eats most of the trunk depth.  It is still obscenely roomy and practical with the tall hatch and fold-down seats. But with the seats up, Prime cuts your cargo space down pretty dramatically.

All in all, a high-quality and high-tech delight.  From its proximity locks to its Qi wireless charger inside, Prius Prime feels like a car from the future.

Prius Prime is a GIANT upgrade over standard Prius and Prius Eco from this generation.  To deliver the 133 effective MPG, Prime has an 8.8 KwH li-ion pack that’s double the old Prius Plug-In, and more than 12X the normal Prius 2016 battery capacity.  Using average electricity rates, filling this to the brim will cost about a buck.  Any normal plug will do, but a 240V, heavy-duty plug cuts the overnight charge time down to two hours, total.

All in, your mileage then goes from from 54 in gasoline-only to 133, one of the best MPGe of any plugin so far.  Impressive.

Prime’s fancy batteries add about 180 pounds out back, which dulls what extra contribution they make to acceleration.  0-60 pace stays about the same as the regular Prius in the mid 9’s.  But wait, there’s much more.

THe extra torque from the larger electric motor pays big dividends with in-gear and passing power.  In-gear in a loose term as Prime sticks to a CVT auto. But the Prime is much less busy with its gas engine on full throttle — scooting you up to speed with less effort.

In terms of passing power, Prius Prime really proved its mettle.  Regular Prius loses puff around 70-mph, with glacial pace from there to 90-mph or so. Prius Prime feels like it has an extra 100HP when you make a move to pass. It actually hustles!

We did have some gripes with Prime on the highway.  During an extremely windy road-trip up I95, the strong crosswinds and grooved pavement joined forces.  Their goal?  To destabilize Prius Prime!

In this instance, Prime took two hands to keep on track.  It felt very susceptible to gusts, nudging the car sideways in an unpleasant way.

This was our only real gripe in the performance metrics, though.  Prime has little lateral grip but is actually pretty playful and evenly-balanced around fast corners.  A wheel/tire upgrade would really help here, too.

Prime starts from $28k, about 4k more than the cheapest normal Prius.

So is Prime a worthwhile upgrade over the standard Prius?

YES!  For those who want more luxury, more tech and more eco excellence, Prime delivers on all counts.  We’d recommend it for anyone’s living situation, too, and not just those with garages.  After all, you can now snag those PRIME spaces in parking garages now!  Free miles.

That is just the powertrain.  When you take into account the exterior design, Prime feels like a no-brainer for next-level green transport.  This is a car that will reward an experienced Prius owner with endless smooth, silent power.  Newcomers will be charmed just as easily by its extreme ease of driving in city traffic and extreme aversion to gas stations!