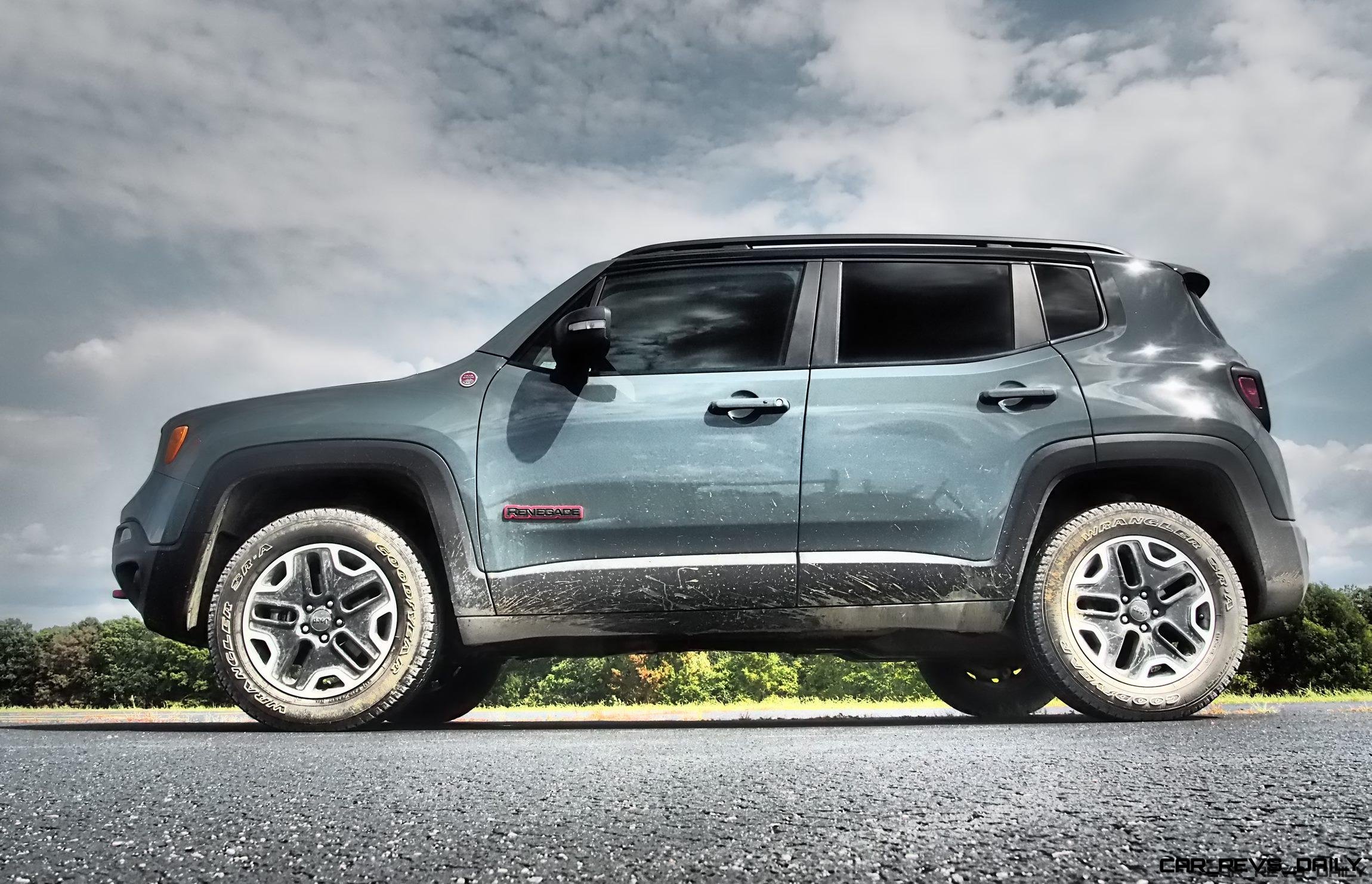 When I took delivery of the 2016 Jeep Renegade Trailhawk for testing, a colleague told me, “The little Jeep is surprisingly capable.”

Those two words — “surprisingly capable” — came to define my experience with the Renegade Trailhawk as I took it down some deep, difficult rock-and-mud-and-gravel trails in the hills of eastern Middle Tennessee.

There’s no denying the Jeep Renegade has a definite cute factor. That’s probably the first reason many Jeep purists scoff at the littlest Jeep in the lineup. It doesn’t look like a chiseled-jawed Wrangler.

That notwithstanding, there’s no mistaking the Renegade for anything but a Jeep. It’s got the signature seven-slot grille, the big, round headlights, and a boxy form factor that instantly calls the Wrangler, the most identifiable Jeep, to mind. In my tester’s Trailhawk trim, there’s also a slew of useful stuff for actual trail-busting, such as a pair of red tow hooks affixed to the front bumper, more ground clearance than standard 4×4 Renegades, and skid plates from front to rear underneath the vehicle to protect the Renegade’s nether regions from craggy harm.

The interior sees a mix of modern Jeep features and quirky accents. Anchoring the center of the dash in my tester was FCA’s corporate Uconnect infotainment touchscreen measuring 6.5 inches diagonally. The border of this screen had one of the most noticeable of the Renegade’s many “Easter eggs:” stencil text that reads “SINCE 1941” above the screen. Other Easter eggs included a tiny military Jeep crawling its way up the windshield border on the passenger side of the vehicle, Jeep grille signatures on speaker grille surrounds, and multiple repetitions of the “Jerry can” X shape.

The same colleague who told me the Jeep Renegade was “surprisingly capable” practically ordered me to take it off-road, so I did my best.

I’m not an off-road enthusiast by any means, but my part of the country is ripe with opportunities for that kind of activity. I took the Renegade Trailhawk down a winding gravel road that quickly transitioned into a trail. There was some gravel — big, chunky gravel, not the smooth stuff from your driveway. There were areas of wide, flat rocks that were wet from rain, there were a few water crossings, and there were plenty of areas where large rocks jutted up from the surface of the trail to make the going especially rough.

Through it all, the Jeep Renegade Trailhawk remained composed and tenacious. There was a SelecTerrain dial in the center console that would allow me to dial-in different drive modes for different conditions, such as sand, mud, snow, or rock. But I left it in its default Auto mode and only used the available 4×4 LOCK feature when things got especially rough.

I eventually found the limit of grip available from the fitted Goodyear Wrangler SR-A tires. Though the Renegade was doing its best to claw up a particularly craggy, steep section of the trail, the Goodyears slipped a couple of times on large, sharp rocks protruding from the path, causing the Renegade to slide with gravity downhill. Not wanting to be the guy who wrapped this Jeep around a tree in the middle of nowhere — with no cell phone reception, might I add — I backed down, found a wide spot in the trail to turn around, and left the way I came in.

The experience left me with a new respect for the Jeep Renegade. We bonded. I was mean to the Renegade, and it never complained. I imagined it practically begged me for a good set of tires so it could go back and conquer that last hill. The chassis remained admirably stiff, even on a couple of occasions when I managed to get one wheel up off the ground.

If I had to describe the Renegade’s demeanor for those of us who don’t go off-road often, I would call it confidence-inspiring.

The Renegade’s on-road behavior was just as admirable as its off-road chops — especially if you grew up with old Jeep CJs and XJs that drove about as well as an oxcart and got dismal fuel economy.

Jeep Freaks might give the Renegade grief for being the product of a Fiat factory in Italy, but those Italians injected a dose of solid road feel into an SUV that competes in a class of often too-numb, too-boring competitors. The steering had a nice weight both at speed and in parking maneuvers. The suspension did a good job soaking up road imperfections while maintaining a healthy handling balance — this despite the Trailhawk having more ground clearance than any other Renegade model. The same stiff chassis that inspired confidence off-road did admirably on twisty pavement, too.

Perhaps most important for families who could not afford to feed a piggish Jeep Wrangler’s appetite for fuel is the Renegade Trailhawk’s decent fuel economy. I saw a tripmeter-indicated 26 MPG in mostly highway driving. On the trail, where I was in 4×4 low range a lot and also idled the engine a lot while I got out to shoot photos, I saw a manually-calculated 22 MPG.

Jeep makes use of the Fiat-Chrysler 2.4-liter “Tigershark” gasoline engine in the Renegade Trailhawk. Its power is routed to all four wheels through a ZF-designed nine-speed automatic transmission. Some reviewers cry foul at this transmission’s programming, but my experience with it was positive. It never took too long to summon the right gear for passing or climbing a hill during my test.

The Jeep Renegade Trailhawk I tested was loaded with every option available. By default, Trailhawks come with the 5.0-inch Uconnect screen, but mine had the optional 6.5-inch upgrade. It also had the optional My Sky removable roof panels, optional heated leather seats, and navigation. Basically, it was the top dawg of Renegades. As such, it commanded a $32,000 price.

If that seems like too much for a compact SUV, consider this: Trailhawk starts at $26,000 and change. At that price, you’re in the meat of the small-SUV market. That $26K doesn’t get the leather seats or the larger infotainment screen with navigation, but in all other ways the base Renegade Trailhawk is just as capable as the one I tested — skid plates and all. Spend $26K on a Chevy Trax, and you might get all-wheel drive, but you certainly won’t get something you’d want to take on the trails I threw at the Renegade Trailhawk. Same for the Buick Encore, Nissan Juke, and even the Renegade’s sister car, the Fiat 500X.

If you ever had a crush on one of the little box-shaped cars that were all the rage in the late aughties — Scion xB, Nissan cube, Kia Soul — but wanted more capability in adverse conditions, the Jeep Renegade Trailhawk is making a serious play for your affections. It’s utilitarian, endearingly cute, and it’ll haul your family around without being uncouth to drive on-road or draining your wallet for gas money.

Disclosure: Jeep provided the vehicle, insurance, and a tank of gas for this review.

Lyndon Johnson is a husband and father of two who has now spent more of his life as a journalist than as a non-journalist. He serves as assistant editor at his hometown weekly paper in rural Tennessee and freelances in the automotive journalism world.