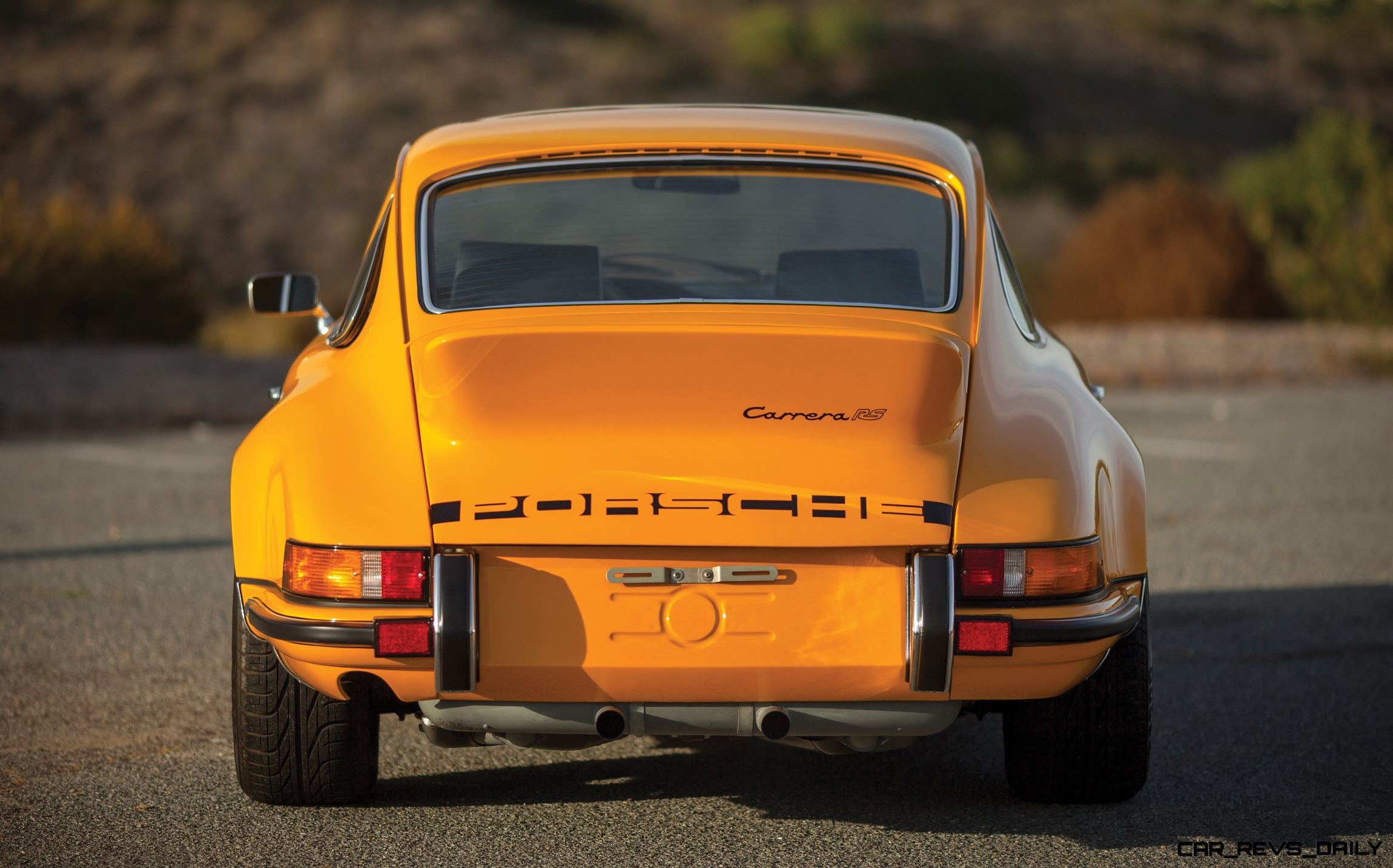 Final RM Sotheby’s preview for now… sorry for the six-pack in a row!  Just really geeking out on these rare icons, incredible photo sets, and vintage perfection.

This Carrera RS is breathtaking. It look absolutely brand new. As though it just came from the factory, unloaded at the Port of New Jersey and shipped to a tropical vault.

As such, an estimate around $1-million is plausible among Porsche fans — who may not have another chance at such a flawless original for years.

Porsche’s 1973 Carrera RS has become one of the most sought-after sports cars to emerge from the fabled German automaker. Having retired its hugely successful and Le Mans-winning Type 917 Prototype program of the late 1960s and early 1970s, Porsche needed another racing venue to further bolster its competition image. When the FIA created a new series for production-based sports cars, Porsche pounced on the opportunity.

Using the 911S Coupe as a starting point, the Competition Department created two different versions of the Carrera RS. The Sport model, also known as the Lightweight (option M471) was intended for competition use and would be largely stripped of its interior. The Touring version (M472) offered some of the Lightweight’s features but was much more civilized and trimmed for comfortable road use. Many were also equipped from the factory with 911S accoutrements including sunroofs, full carpeting, and an entertainment system, and some also featured air conditioning.

When the prototype was shown to the company’s directors, Porsche’s sales department declared that the company could never sell 500 examples of this expensive homologation special. However, Competition Department head Ernst Fuhrmann thankfully prevailed, and when the Carrera RS made its public debut at the 1972 Paris Auto Show, orders flooded in. Porsche not only sold that first series of 500 but also a second series—and then a third. While most were delivered in Grand Prix White with contrasting “Carrera” graphics, the cars were also offered in Porsche’s eye-catching and popular “Jelly Bean” colors.

“THE NICEST RS ON THE PLANET”

It was Thanksgiving Day 2004 when Lee Giannone called his friend Kevin Jeanette to wish him a “Happy Turkey Day.” After catching up and wishing their respective families well, they got to talking about cars, as per usual, Porsches specifically. Having just sold his 1975 3.0-liter RSR, Lee mentioned to Kevin that he was having early-911 withdrawals and “if you ever run across an RS, let me know.” So began a four-year adventure to find and restore “the nicest RS on the planet.”

Kevin just happened to be working on a multi-Porsche deal in Japan. While he wanted to purchase two of the racecars, he needed to find a willing buyer for a Carrera RS. As such, the deal was done and Lee acquired just what he was looking for, though sight unseen. Three months later, the RS arrived by container. Though having been repainted Grand Prix White, the Porsche was otherwise complete, with its original, numbers-matching drivetrain, but in need of restoration.

The next few months saw the complete disassembly of the RS and a meticulous, painstaking obsession to restore the prized Porsche back to its former glory. Giannone recalls chasing parts around the world that have not been available for over 20 years. Phone calls led him to England, where he sourced the correct RS steering wheel with the proper part number and date code. The ultra-rare German RS owners’ supplement came from Holland, while the correct hood badge was found in Australia. With atypical attention to detail, the experts at Gunner Racing, known for their work on 917s and other racing Porsches, addressed every nut, bolt, and detail on the car. Even the wiring harness was unbundled, with each wire cleaned and reassembled per factory standards, even if the work would never be seen by the most keen observer. It was to be a labor of love.

By 2008 came the commitment to make the Porsche Parade in Charlotte later that year. The mechanical restoration was complete, and all that remained was to install the interior and final details, such as fitting the doors, hoods, and glass (which turned out to be the most time-consuming task). Even sourcing the correct Becker-Mexico Olympia cassette radio (an outlandishly expensive option when new) only added to the detail and accuracy of the restoration. With only days left, the car was finally complete, and Kevin and Lee headed to North Carolina from West Palm Beach. Arriving the night before the parade, they unloaded the car at the concours prep area and tried to get some well-deserved rest.

Four-thirty that Sunday morning came far too quickly, and it was time to drive the RS onto the judging grounds. Nervous, as Lee had never entered a concours before, he started up the 2.7-liter for the first time, and fortunately it came to life without hesitation. Judging went off without a hitch as well, and the car passed through the class and group rounds and into the final “judge off.” With only minor shortfalls, the Porsche scored an outstanding 296.7 out of 300 points, enough to claim Top Honors overall, the only Carrera RS to have done so. So, for at least one day, this Porsche was, in fact, “the nicest RS on the planet.”

The RS found a new owner soon after the Charlotte Parade, in a California Porsche enthusiast. Wanting an original Signal Yellow RS, he sought the advice of Porsche expert Dirk Layer, who found this RS to be one of the finest extant. Since acquiring the Porsche, the owner has driven it sparingly, and the RS remains in exceptional condition throughout. It is supplied with a correctly dated collapsible spare wheel, a jack, a tool kit, an inflator, a valet key, German-language manuals in their correct maroon and blue vinyl cover, and the Japanese Bill of Sale. Recently driven by an RM Sotheby’s specialist, he can attest to the superb performance of this Carrera RS and that it not only looks spectacular but also continues to drive exceptionally well.

As the 911 has endured through to present-day production, it is clear that there will always be a special place in Porsche history for this first competition-based homologation model. The Carrera RS, undoubtedly the most desirable model of air-cooled 911s, is nothing short of legendary.