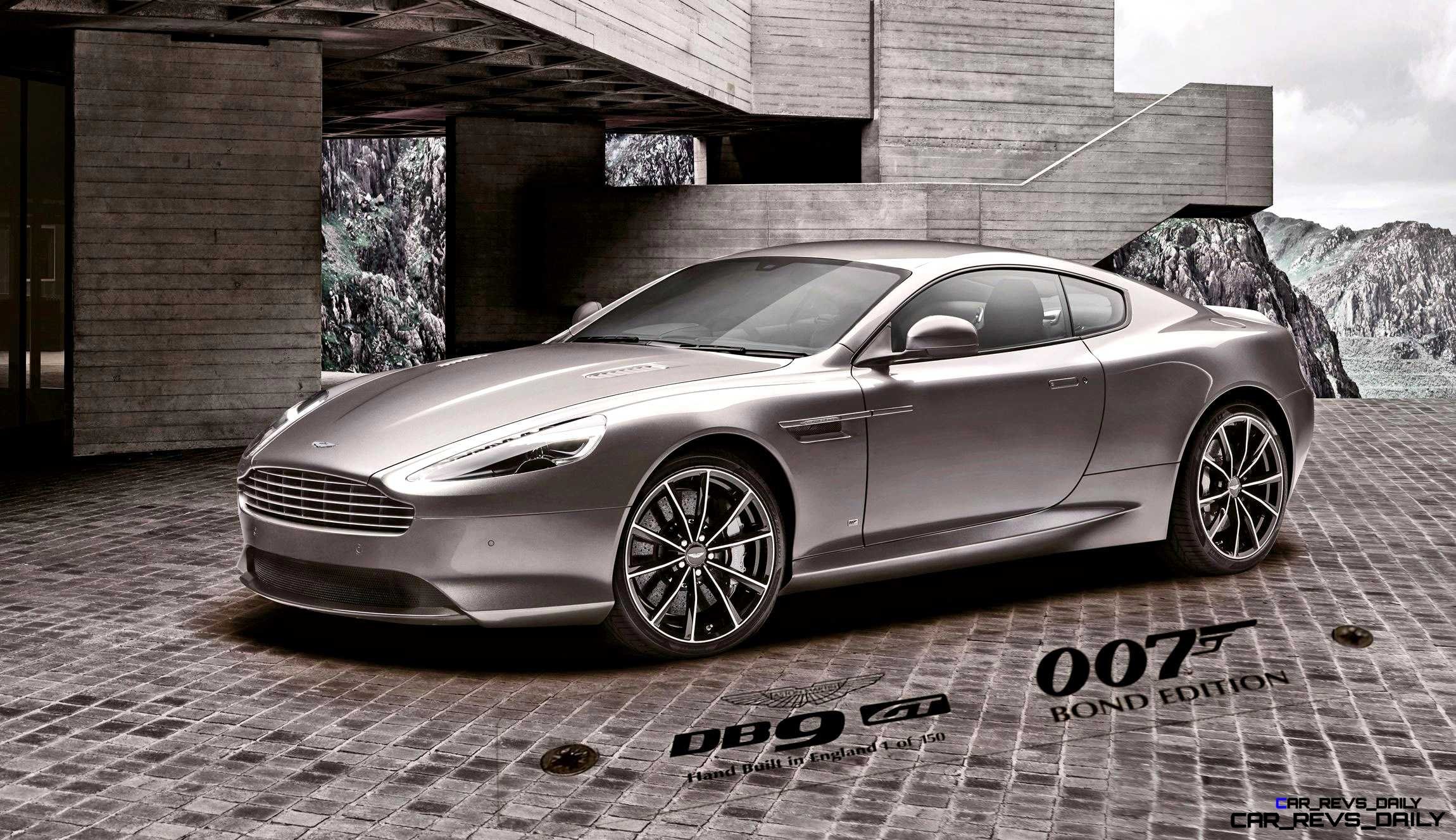 Aston just rolled out a new special to celebrate the new James Bond film, SPECTRE, debuting this fall. For all the shared cache among Bond and Aston, we cannot recall another specifically badged Aston model with the Bond name.

This is likely down to simple licensing costs, or brand covetousness within Sony pictures.

An Aston Martin wearing 007 James Bond badges will always have a huge built-in fanbase, though, and the time is right to co-brand.

A far cry from the DB10 prototype in the film, the DB9 GT Bond Edition is still fairly special in its own right. A giant power bump in the form of new GT specs promises 550HP  — and the most rapid DB9 to date. A 62-mph sprint of 4.5-seconds and top speed of 183-mph are stonking totals for the luxury-focused DB9.

A major update and upgrade inside brought the DB9 GT up to the new infotainment and electronics seen in the Vanquish. The DB9 GT Bond Edition lacks the latest eight-speed automatic from the 2016 Rapide S, unfortunately, but otherwise is bang-up-to-date with all the newest Aston tech gadgets.

These will not include machine-guns, oil slick dispensers or bulletproof rear shield a la Goldfinger.

Overall, however, the luxury of ADSII adaptive dampers and drive modes will make the DB9 GT Bond able to flip from luxury to sport as quick as Connery could smirk. Or as fast as Daniel Craig is with a scowl.

Unique carbon-fiber, black chrome and polished alloy details outside and in set the DB9 GT Bond Edition apart from previous DB9s very effectively. We still strongly prefer the new shapes and floating trunk spoiler of the Vanquish — but the DB9’s luxury positioning lets the Vanquish go even more hardcore with its chassis settings.

Will any of this matter to buyers? Not likely!

The rarity and overt 007 connection for the DB9 GT Bond cement its appeal among the millions of Bond-lovers worldwide.

In certain markets, the DB9 GT Bond can even be ordered in Volante ragtop form.

Martini lunch in Monte Carlo?   Race you there!

2 September, 2015, Gaydon: For more than half a century Aston Martin has been the sports car of choice for the world’s most famous spy, James Bond. Now, the luxury British brand is celebrating the release of Spectre with the launch of the strictly limited DB9 GT Bond Edition.

Limited to 150 examples worldwide, the highly desirable model is based on the recently launched DB9 GT. Designed to offer the best of what DB9 can be, the DB9 GT delivers world-class grand touring and hand-built excellence.

Building on these exceptional foundations, the new Aston Martin DB9 GT Bond Edition adds even greater levels of exclusivity by virtue of its limited edition build run along with a host of carefully considered trim, equipment and accessory additions that celebrate the brand’s more than 50-year association with the famous film franchise.

The DB9 GT Bond Edition is distinguished by a subtle yet elegant selection of styling additions inside and out.

The all-alloy, quad overhead camshaft, 48-valve 5,935 cc front mid-mounted V12 is mated to the proven rear mid-mounted Touchtronic II six-speed transmission with electronic shift-by-wire control system. It carries the luxury sports car from rest to 62 mph in 4.5 seconds, and on to a top speed of 183 mph.

Besides its unique interior and exterior features, the DB9 GT Bond Edition offers a suite of elegant Bond-themed accessories to complement the model’s creation.

Welcoming the debut of the DB9 GT Bond Edition, Aston Martin CEO Dr Andy Palmer said: “Aston Martin and James Bond are intrinsically linked in the minds of many of our enthusiasts and, indeed, owners, worldwide.

“In the run-up to the launch of the new film, Spectre, which sees Bond behind the wheel of the DB10, we are very happy to be able to celebrate the partnership with this superb limited edition DB9 GT collector’s item.”

Dr Palmer added: “I’m sure the 150 owners worldwide who succeed in acquiring one of these exceptional sports cars will, like the rest of us, delight in seeing Spectre when it is released later this year.”

The new DB9 GT Bond Edition is available to order in markets around the world from today, priced at £165,000.

EON Productions Limited and Danjaq LLC are wholly owned and controlled by the Broccoli/Wilson family. Danjaq is the US-based company that co-owns, with Metro-Goldwyn-Mayer Studios, the copyright in the existing James Bond films and controls the right to produce future James Bond films as well as all worldwide merchandising. EON Productions, an affiliate of Danjaq, is the UK-based production company which makes the James Bond films. The 007 franchise is the longest running in film history with twenty-three films produced since 1962.  Michael G Wilson and Barbara Broccoli succeeded Albert R ‘Cubby’ Broccoli and have produced some of the most successful Bond films ever including CASINO ROYALE, QUANTUM OF SOLACE and SKYFALL. The 24th film, SPECTRE, is currently in post-production.

Aston Martin and the DB10

British luxury sports car manufacturer Aston Martin created the DB10 exclusively for James Bond to drive in the forthcoming film – Spectre. This is the first time an entirely new car has been created specifically for Bond. Production has been strictly limited to ten examples of the bespoke sports car which was developed and hand-built by the designers, engineers and artisan craftspeople at Aston Martin’s Gaydon headquarters in the UK.

1 Not available in all markets
2 Includes Traffic Messaging Channel (TMC) in Continental Europe
3 Complies with UK Thatcham Category 5 requirements. Excludes subscription. Standard in UK
4 iPod is a trademark of Apple Inc., registered in the US and other countries