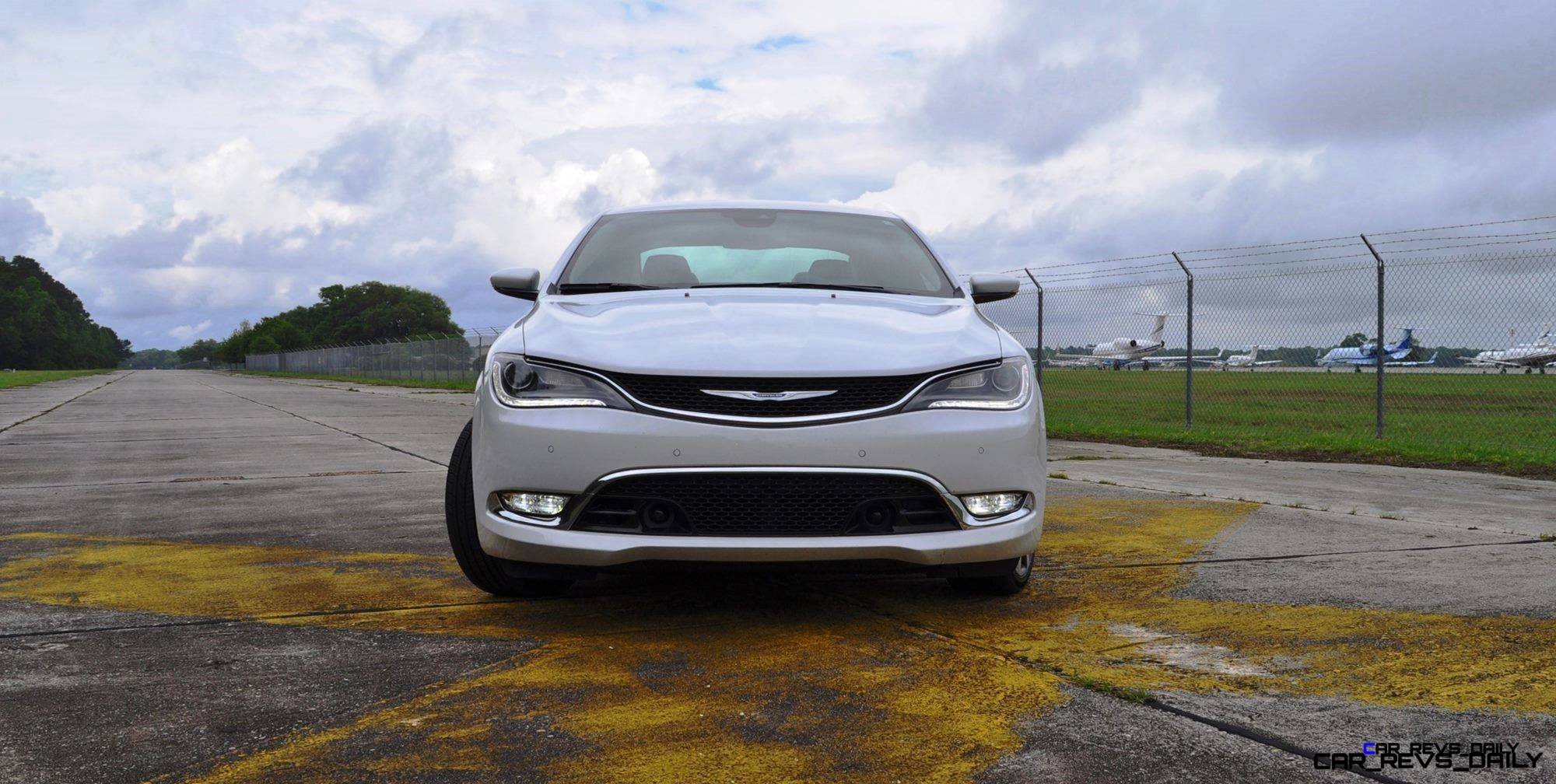 But keep reading, because this 200C is a completely transformed machine with the optional 3.6-liter V6.

The top trim level with the top engine, the 200C we tested lacked only the dual-pane moonroof and AWD from the options list. Besides those two elements, this 200C is a match for the Maserati Ghibli feature-for-feature.

The Maserati comparison rings true many more times during a week of driving and a road trip in the 200C V6. The woods, the technology throughout, and the performance chops of the 200C V6 are absolutely astounding — with its 5.8-second sprint to 60-mph making this mid-size sedan the quickest on the market. Chevrolet Malibu Turbo comes in at 5.9-seconds, while the Toyota Camry V6 slides in for 2015 with a 6.1-second sprint.

But neither of those cars can manage the power as well as this 200C — and the Chrysler has big advantages over its mid-size competitors in many other areas as well.

Let’s dive into the full review with headings of Exterior, Interior, Performance, Pricing and Summary. Toward the bottom of this review, we also include the tech specs of the 200. An HD drive brief video plus 110 photos make appearances as well.

The 200C is a really striking machine on the roads, with a well-resolved design that is eye-catching from afar and satisfying up close. Its signature piece up front might be the layer of white LED daytime running lamps ringing the bottom of the headlights, but this is only the start of smooth, flowing and synchronized lines all around.

An elegant beltline crease flows up and out of the main LEDs and all the way to the tail of the car. The beltline flips downward near the trunk to form another flowing piece of sill accent, but the pinched flow of metal continues over the trunk with a slight ducktail spoiler flip at its tail edge. Solid LED lines of brake light live within the slim lamps out back in a very Maserati-esque way, while the V6 here packs dual exhaust outlets exclusive to this engine.

Overall, the 200C delivers very harmonious aesthetics and flow in its look, with the white paint making the 200C feel like it would fit right in at the Apple store.

The detailing of the 200C V6 is fairly conservative and trim-dependent, however. Chrome accents dominate all 200’s from the $21,000 base price of the car, and continue on this loaded 200C. (The gloss-black 200S trim level looks ridiculously cool — watch for the next article for a close look at the 200S design differences.)

19-inch polished alloys make a huge difference in the overall stance of the 200C, which rides low and has very little front overhang to betray its front-drive layout.

The main critique we have on the loaded 200C V6 is that it can, in passing, look a bit too similar to the base models. While the V6 200C (with lighting package) has LED foglamps down below and those dual pipes in back, the base 200 mimics these accents a bit too successfully.

When stumping for the 200C V6, it would be a little nicer if Chrysler made your huge power and performance just a bit more noticeable on the roads. Swoopy shapes all around for the 200C can make you think that the cabin is small, or that the back seat lacks legroom versus the jumbo Accord or Subaru Legacy. We certainly thought the 200C’s back seat was going to be tight. But here is a secret: the 200C has tons of leg, elbow and shoulder room throughout the interior. It even has plenty of headroom and excellent front/side visibility. The only places you take a hit for the sleek design is in rear visibility and access to the rear cabin. The C-pillar is so steeply raked that entering the back seat requires a bit more care than the Camry or Accord, and is on-par with the Fusion and Malibu. Once inside, the 200C has fantastic comfort and room back there. True story.

The seating is also pretty posh and Maserati-like, with individual base cushions, sculpted seatbacks and a reclined overall angle for occupants. We are not 100-percent sure, but the 200C feels bigger in the back than the Ghibli. Certainly worlds better than the Malibu and its low seat base and tall seatback angle.

The cabin has a moodier and much more modern feel than any other mid-size sedan on the market. Up front, you immediately know how cool and fresh the 200C is the moment the door thumps shut with a premium ‘whoomp.’

Open-pore wood wraps the dash, with touchable grains and a sexy stripe of contrast wood making a subtle and classy pattern.

The rotary-knob shifter becomes absolutely second-nature, while the tall center console brings switches right to hand and evokes the Panamera a bit. Within this giant console lives a huge cubby for the largest of bags or cameras. A sliding center portion up top houses the cupholders, and it all snicks around and adjusts with a Germanic level of precision.

Fantastic driving position options and overall lateral support encourage hard driving — and the 200C V6’s drivetrain is more than happy to play along. Thrillingly, hilariously fast. For all the gear-shuffling and lack of thrust in the base 2.4-liter and 9-speed auto, you might think the V6 would be similar with a smidge more oomph. But you would be dead wrong.

This 200C V6 absolutely craves full throttle and rockets itself from a stop. The ultra-wide range of gears to choose from never creates trouble for the transmission — it just does its thing impercetibly on half throttle and for normal city drives.

Floor the gas, however, or twist the gear-knob from ‘D’ to ‘S’ and this car comes alive like a mutant greyhound puppy.

A slap of the gas pedal to the floor at any speed and in any gear means instant and intense G-forces — the car just hunkers down and blasts off with incredible pace.

It is not just a drag-race darling, either. The 200C V6 really hangs on in corners and enjoys a good scruff-of-the-neck driving style. Thrown around with abandon and approaching nine-tenths of the performance envelope, the 200C seems to get better and better. It makes insane speed all the time — even through corners.

The 19-inch rubber really helps here. Where the Camry and Accord V6 become all understeer and wheelspin, the 200C V6 is planted and goads you on. Harder, faster, louder… it seems to yell. The steering weiughts up nicely in bends, while the brakes (medium firmness) can bite HARD and really stop the car on a dime — once you shove them deep. For the first bit of travel, they are very progressive and friendly. But keep pushing, and the 200C V6 comes to a tight and BMW-like immediate halt.

Overall, definitely the most fun we have had driving a mid-size sedan in years.

We see a $3,500 rebate available in the Southeast — which is worth jumping on.

Chrysler 200 Base Prices by Trim

Trust this: nobody was more surprised to love the 200C V6 than we were. After driving the base four-banger last year, we came away impressed with the LEDs, cabin and overall design. We even liked how planted and secure the base 200 felt on the highway.

But there is almost no comparing the overall performance of the four versus the V6. With nearly 300 horsepower, the 200C becomes an altogether different breed of car.

With AWD, we started to think of the 200 as a mini S4 competitor, or perhaps a new rally-style performance sedan like our departed (and sorely-missed) Subaru Legacy GT turbo).

But a choice of front or AWD in the Chrysler makes it unique here, and the exceptional automatic makes it a star.

Think about it: what other mid-size sedan has AWD and a V6 available? The dream formula is ruined on the new Legacy 3.6 with a CVT automatic (and lack of power), while the Fusion AWD’s largest engine is a turbo four.

Sprint pace in the 5-second range, a cabin that is a 9/10, style that tweaks Audi, plus tech goodies shared with Maserati?

The 200C V6 is a MUST_DRIVE for mid-size shoppers!

NOTE: The information shown is preliminary and based on data available at the time of publication and is subject to change All dimensions are in inches (millimeters) unless otherwise noted.

All dimensions are measured at curb weight with standard wheels and tires unless otherwise noted.