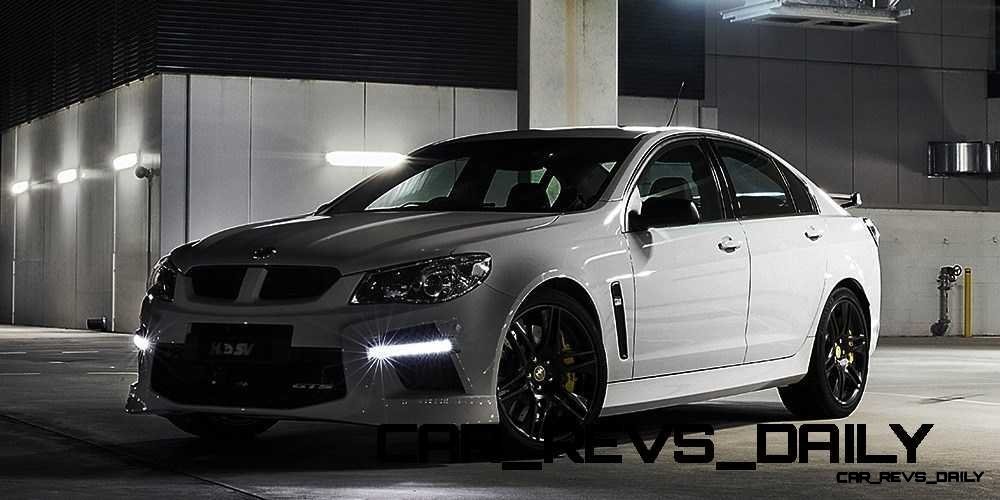 Note: This article is a few months old, but unpublished until now.. HSV has launched their latest generation of track-ready vehicles under a new nomenclature: Gen-F.

The Gen-F lineup consists of hot sedans, ‘utes and wagons all powered by the monstrous 6.2 liter LSA V-8, available magnetic damping, and even the latest MyLink infotainment package. The biggest news is in the noses of the cars. They are all significantly restyled to address the embarssing grille and LED setup on the current models. The noses vary noticeably between the donor Holden Commodore up to the hardcore GTS model. Stateside, the Commodore is best known as the Pontiac G8 GT, an underrated car whose nasty interior let down a solid RWD enthusiast package. The latest Chevrolet Caprice PPV is an extended-wheelbase version of the G8 GT, whereas the Holden Special Vehicles models are more than two generations newer.

Sharing primary component sets with the forthcoming U.S.-market Chevrolet SS, the HSV GTS is the big seller in the diverse model series. Packing four doors into its sleek profile, the GTS offers a more luxurious but faster package than the ClubSport R8 models. The rear of the Gen-F lineup is also modified, most heavily on the sedan with updated LED taillamps and indicators, re-profiled bumpers and a restyled diffuser panel. The Maloo ‘Ute keeps its tail graphic, while the Club Sport R8 Tourer cleans up its rear view by ditching the tailgate lamps in favor of just the two outer lights. The interiors get a massive overhaul with a new 8-inch touchscreen and additional safety technology. The big news under the skin are third-gen, adjustable magneto-rheological dampers and optional SV Enhanced package that bumps power and torque by 20 each via a bimodal intake that opens wider under full throttle. Launch control is standard on the manual cars, dropping the 0-60 mph sprint from 4.8 seconds to just 4.4 seconds. The V-8 delivers power in the 440 horsepower ballpark and tops out at an electronically limited 155-mph. Prices of the non-imported Gen-F series are in the AUD $65,000 range, about $10,000 higher than the Chevy Caprice, also sold in Australia.